Walking In A Winter Wonderland

The holiday season has arrived yet again, and Jagex is treating Runescape with the traditional Christmas event.  However, like most of their holiday events this year, it is also coming along with a quest.  This article will have information on the event first and then the quest.  NOTE: this article is NOT intended to be a walkthrough;.  Anyway, without further ado:

I logged in to a seemingly unfestive Runescape world.  I was in Falador at the hairdresser’s place (to check out the unstylish new female hairdos) and I had gotten word that the new Christmas event could be started north of Lumbridge, Rimmington, or Falador, so I promptly exited Falador and found myself face to face with a snow imp dressed in a Santa suit.  The snow imp informed me of some ill-goings with Jack Frost (the naughty guy had conjured random ice patches all over Runescape), so, being the good Samaritan I am, I decided to help it out.  The imp gave me a necklace that I could use to conjure up a snow imp to help me find Jack Frost.  With that tool, I departed on my epic adventure to rid Runescape of yet another wrong-doer. 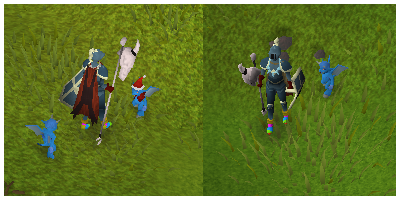 It turned out that the imp I called – named Boris – led me on a hot-cold game to try and find the patch of ice that Jack Frost was located on.  There were many patches located throughout the free world of Runescape, but after agonizing clicking on my imp, I finally managed to find the patch Jack Frost was on – a place northwest of Varrock.  When I revealed myself to Jack Frost, he promptly tried to freeze me (what a nice guy, but it was then that I learned the “Freeze“ emote so I guess he is pretty nice for that), but my necklace deflected the spell.  Boris then asked me if I wanted to depart to the Land of Snow (sound familiar?) to defeat Jack Frost.  I promptly agreed.

When I arrived at the Land of Snow, the first thing I saw was Jack Frost, standing around a barricade of ice crystals with only one opening – right in front.  I lined myself up around the ice until I was directly in front of that opening and then slid into him (a rather anti-climatic defeat). 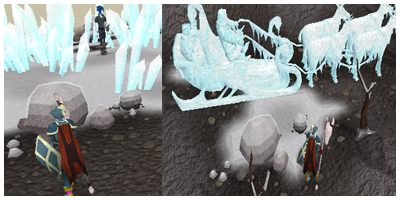 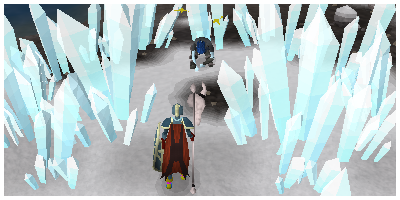 The Ice Queen then teleported in, making Jack apologize for his mistakes.  She then turned and looked at what seemed like a statue of Santa’s sleigh before realizing that Jack had frozen jolly old St Nick as well.  I decided to help thaw out Santa by cutting some branches while Boris went off to get a tinderbox.  After all the branches were in place, I lit them up and Santa came back to life – fully happy and hypothermia-less. 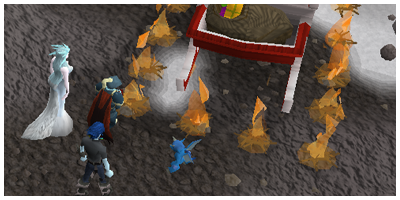 He thanked me for helping him out by rewarding me with a Santa suit.  With my reward collected and the event complete, I teleported back to the main Runescape world. 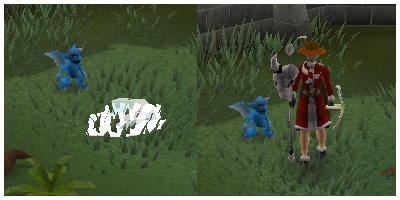 I then proceeded to travel to Lumbridge to speak with Explorer Jack, who would give me instructions for the quest portion of the Christmas event: Myths of the White Lands.  Jack asked me to go talk with Isidor in the Wizard’s Tower so that I could retrieve some “precious stones” from the Land of Snow that Jack had heard about.  After I went to the tower south of Draynor and reminded Isidor of the Land of Snow teleport phrase (Ectosum glissendo!), I found myself back in familiar white scenery. 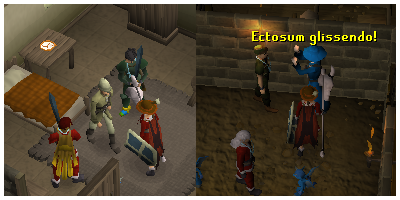 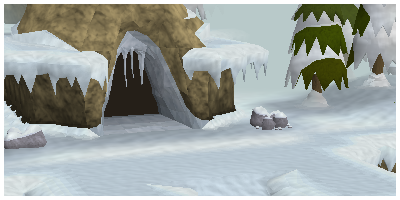 However, there was one little difference: everything was ice.  I had to navigate my way through a slippery puzzle in order to get to the cave entrance.  When I entered the cave I didn’t fare much better: the caverns were also completely covered in ice.  I had to move through each one a certain way in order to get to the end and continue.  It reminded me a little of puzzles in Pokemon. 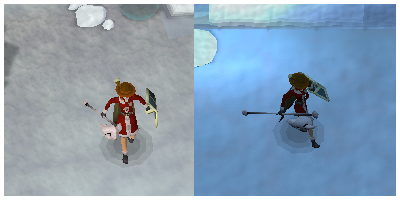 There were six caverns I had to get through in order to reach the stones and their guardian – a Yeti – in the seventh cavern.  They were all pretty much the same except for the sixth cave, in which I had to push two blocks into their correct positions in order to access a platform on which I could defeat the Yeti. 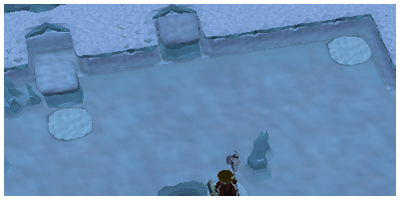 When I finally went through the caves, got what rewards I could, and pushed the blocks into their correct place, I arrived in the room with the Yeti on a little cliff to the side.  In order to defeat the Yeti, I yelled through a strange ice tube, which amplified my voice so much that it promptly shocked the Yeti to death (or at least that’s what it looked like). 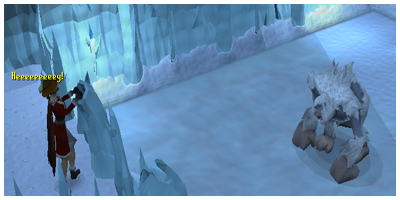 With the Yeti gone, I got off the little platform and re-entered the seventh cavern through the main entrance and collected the stones.  After exiting the cave, I was confronted by three snow imps, who revealed to me that they had tricked Explorer Jack and that the “precious stones” were really Yeti droppings (oh the naivety of people…).  They offered to put a spell on them to freeze the droppings in order to make them seem more like “precious stones,” and I accepted their ever so gracious offer. 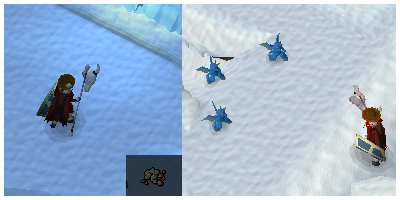 I then returned back to Explorer Jack and offered him the “stones,” which he took without question and gave me my reward: a 500 exp lamp.  I returned to him a little later and retrieved a second reward: 5k gp that was part of his profit from selling the stones (I don’t know who’d be stupid enough to buy them, but I feel bad for them anyway).  And with that, I successfully completed the 2008 Runescape Christmas event and quest. 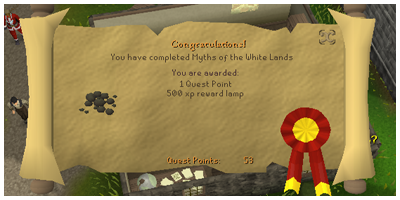 My Thoughts: The event was rather short and a bit of a letdown.  The whole part where I cut branches to de-thaw Santa was cutscene, so I thought that if that was an actual part of the event it would make it even more enjoyable.  It was just so extremely straightforward and easy that I felt it could have done so much more, especially when Jagex made it sound so enticing in their poll.  The quest I have no complains about; I felt it stretched the mind well with the ice-traversing puzzles, something that few quests do nowadays.

As for the rewards, the 500 exp and 5k gp felt too little for a quest that took as long as Myths of the White Lands did.  I went through it without a guide and it took a good half hour or so because it was rather challenging to figure out, so I felt something more would have been better.  The Santa suit… lets just say I don’t understand why every bottom piece for females has to be a skirt.  If it weren’t a skirt, I would be rather satisfied with it.  Darn it Jagex, stop being sexist.  Maybe females want pants too.

posted by Bluebrisingr on 15th December 2008, at 9:53pm | 3 Comments
If there’s one thing that makes Runescape clunky and hard to manage, it’s the fact that there is only one main way of controlling the game: with the mouse. While this may not be a problem to some people, it may turn away the eye of seasoned MMORPG gamers.  This was one of the main […]

The First Ever Turkies

posted by Bluebrisingr on 30th November 2008, at 2:34pm | 2 Comments
DESCRIPTION It’s the first ever Thanksgiving in Runescape!  Turkies have invaded Runescape, bringing with them raw turkey/raw turkey drumsticks and a reward.  An object called a Cornucopia is of interest in this event.  You can either get the Cornucopia by killing random turkies around the Runescape world or by finding ten cleverly disguised turkies in […]

posted by Bluebrisingr on 31st October 2008, at 10:13pm | No Comments
At last it’s that time of the year again when little kids get to gain weight over tremulous amounts of chocolate, when girls get an excuse to dress in obnoxious Hooters outfits, and when Runescape has their annual Halloween event.  I forced myself to login to Runescape after getting my orders that I was to […]

Woes of Propaganda: An RS Tale

posted by Bluebrisingr on 29th September 2008, at 8:47pm | No Comments
After epicly failing at writing my first RS story, I’ve decided to try again and see if it would be any better than my dismal first attempt.  Basically what I do is have someone suggest an opening sentence for me and then I’ll write a story based off that sentence.  Thanks to Kirby for submitting […]