At last it’s that time of the year again when little kids get to gain weight over tremulous amounts of chocolate, when girls get an excuse to dress in obnoxious Hooters outfits, and when Runescape has their annual Halloween event.  I forced myself to login to Runescape after getting my orders that I was to investigate this event.  What I was expecting were a series of short tasks one would have to perform in order to get a reward, pretty much what every other holiday event was.   However, I was sorely mistaken, and thus I proceeded to spend about a good half hour on the:

The event took place where it always does: southwest of Falador.  As I took my time walking there from Barbarian Village, I noticed a few people dressed with some pieces of what I assumed to be the reward from the event (since it definitely looked like a Halloween outfit).  The clothes didn’t look too bad, so I started looking a little more forward to the event to get the outfit.  Sadly, I would be let down, but that shall be discussed later.  I also stopped into Draynor village to bank some items and found it completely redecorated for Halloween.  It all looked rather nice in high detail graphics, so this also boosted my hope for the Halloween event. 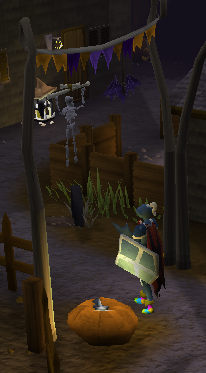 Anyway, I headed over to the event starting point, where Maggie the witch waited, crowded by many green-leveled people.  I got a shock when speaking to her as I realized there was an event and a quest for Halloween (I hadn’t read the news update).  Hoping that I would be able to finish one or both of them before dinner, I sped through the dialogue to start them both.  For the Halloween event, I had to talk to a woman named Wendy a little to the north who would explain to me about trick-or-treating.  I had to trick-or-treat around Draynor, Rimmington, and Port Sarim to get a certain amount of different candies.  For the quest, called Swept Away, I had to go to witches in each of the above mentioned towns and get them to enchant a broom Maggie had.  After speaking with Wendy, I gathered that I had to wear two pieces of clothing that were sold in the Varrock clothing store and go around trick-or-treating in each of the towns.  She explained that some people would want a trick before giving me a treat and hinted that if I wanted help I should look in Maggie’s cauldron.  I did as she said and promptly learned the “Trick” emote. 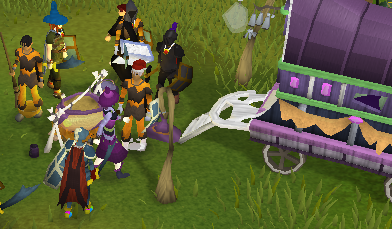 After absorbing all this information about the tasks I had to do, I decided to finish the quest portion first, as I did not have on me the clothes needed to go trick-or-treating.  I proceeded to Rimmington, cursing at my 38% run energy, and arrived at the witch Hetty’s house with no energy left.  She told me that she needs a newt before she can concoct an enchantment ointment to put on the broom.  I then went to her cellar, located outside the house, and climbed down in order to get her a freaking newt (dang lazy people) when I discovered that her delivery ghoul named Gus had mixed up the labels on her crates, which were full of newts, newts and toads, and toads.  He gave me labels to put over them, and I could only check one of the crates to figure out which label went where.  After about four rounds of wrong labeling and many curse words, I got the labels in the right place and got a newt.  I returned to Hetty, who thanked me and gave me the ointment, which I promptly applied to the broomstick.

With one enchantment finished, I went to Port Sarim to visit Betty and get the second enchantment.  I expected a task before I would get the enchantment, and I guessed correctly.  This time it was not incorrect labeling but incorrect animal placement that I would have to fix, and unfortunately there was no ASPCA to help.  I had to move animals one at a time to different pens in order to get them to their correct locations.  It would have been easy had I been able to move animals into a section with another animal.  However, since this wasn’t the case, I spent about another five minutes figuring out the puzzle.  After I finally got all the contrary animals in their correct areas, I was able to retrieve a want that Betty needed in order to cast the enchantment.  After she did, I ran over to Draynor, hoping that this task could be finished quickly and easily.

My hopes were right when I reached Draynor and talked with Aggie.  In order to put the final enchantment on the broom, she needed me to sweep away lines of sand in an area she teleported me to.  This was so that she could create the symbols needed to cast the enchantment.  This puzzle took no more than a few seconds to figure out, as all I needed to do was erase four lines so that four triangles still remained.  After completing this task and getting all the enchantments on the broom, I went to Draynor bank to find some clothing for a costume that I could wear to be able to trick-or-treat.

Remembering that the Varrock clothes store sold black priest robes, I pulled out a robe and a gown and proceeded to go on a Runescape trick-or-treating extravaganza.  In order to trick or treat, all I needed to do was select the “Trick-or-treat” option when talking to an NPC.  Sometimes the person would automatically give me a treat for my efforts, and other times they required a trick, which resulted in me doing the “Trick” emote (nothing more than bats flying around me, although it’s apparently scary enough to make people give me a treat).  I went around talking to people in Draynor, Port Sarim, and Rimmington, all of which said the same boring responses or demanded the same boring trick, with the exception of the Mysterious Old Man who refused to be disturbed (I don’t blame him). 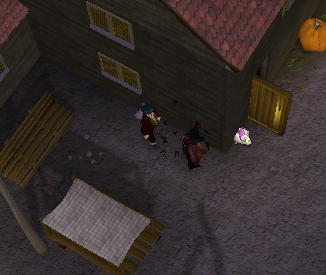 After going around the towns and gathering the required amounts of candy – six popcorn balls, four chocolate drops, and five wrapped candies, I went back to the event area to give my hard-earned items to Maggie.  I got to keep the enchanted broom as well as get 10 portions of the goulash brew that she was making.  The brew would give me 10 times my level of a skill in exp towards a certain skill (aka: I had 31 runecrafting and I got 310 exp for it using one portion).  For the candy, I got all the pieces of the Halloween suit, which, to my great dismay, looked rather scanty-looking and mismatching on a female (the cloak and skirt were way too short in my opinion).  However, I was happy enough with the exp I got from the goulash brew, so that made up for my dissatisfaction with the suit.

Overall this event wasn’t too bad.  The quest was a good add-on to the regular event and the reward was okay, not to mention trick-or-treating was actually somewhat fun for the first few minutes.  I would have preferred the costume to be a little more appealing, but hey you can’t always get what you want.  A 3/5 is my rating for this holiday event.