In April 2017, Jagex showed off a first preview of a graphical rework of the Camelot and Seer’s Village area. The rework was delayed several times, and eventually cancelled entirely. To many people, this was disappointing, as the initial concept art and ideas looked great and refreshing. 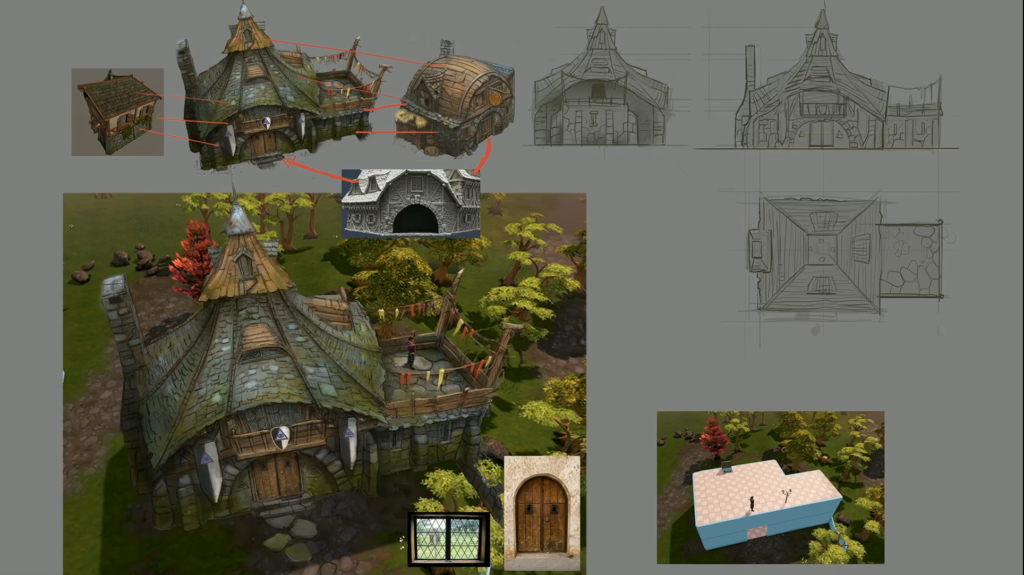 Now, over four years later at the time of writing, the area hasn’t changed one bit. So what would an area rework look like today, and should Jagex invest in these?

Gielinor is a patchwork of graphical styles. There is the beauty of areas such as Al Kharid and Port Sarim, the decent graphics from Burthorpe and Falador, and the visible age of Ardougne and Yanille. It is hard to put a finger on what is the RuneScape graphical style, because multiple iterations of it exist side by side. Sometimes visibly demarked by a straight line on the ground where the texture changes. This really hurts the polished feel a game is supposed to have. Putting Yanille and Al Kharid side by side isn’t even a competition, it’s as if you’re looking at two different games.

A polished feel is needed to not scare off players right from the start. A game that doesn’t look consistently good doesn’t inspire confidence. First impressions are key, which is why Jagex spent so much time polishing up the initial areas of the game, including a brand new tutorial area – Davendale. This leads to the question: once a player is hooked, does it really matter that the graphical standards aren’t consistent throughout the game? How many people quit because Camelot looks not much different from its Old School counterpart? Realistically, very few.

There is more to areas than looking pretty. Areas need to be functional. What is the last time you needed to be in Yanille? Ardougne? Canafis? These areas serve functions in quests and in some aspects of the game, but are quickly forgotten and ignored when growing past those needs. In a sense, the areas start feeling like the more linear MMOs, where you play through region after region, catered to a specific level range. RuneScape’s strength has always been its interconnectedness: between skills, between gameplay styles, and between the areas in its world. Yet, nowadays, much of RuneScape’s gameplay is focused on hubs: the Max Guild, War’s Retreat, and the Archaeology Guild. An abundance of teleports allows you to bypass most of the interesting areas in the world to go directly where you need to go. The world has gone from a complex weave of different locations to small pockets of content between which you travel instantly.

I could argue about whether this is good, or bad, but that won’t change much about the way the game is, and how it will likely remain for the foreseeable future. I could also argue that this implies that area reworks are unneeded, inconsequential, and – by extension – bad updates. Instead, it leads to a template of what an area rework should do. It should not just make an area pretty, or up-to-date again, it should make the area relevant again. Surely, if you spend time on making a beautiful new graphical environment, you do not just want new players who happen to pass through to see it, you want as many people as possible to visit and take in the sights. You want your players to have a reason to be there. Let’s see what we can do with the Seer’s Village area.

First of all, Camelot needs to be mentioned. It is part of a series of quests that aren’t really up to modern day RuneScape standards. Removing Camelot entirely is an option, but perhaps the impact of that is too big. Alternatively, the quests could be reworked to be less of an exact copy of real life persons, and be rebranded so the castle is held by a duke (Camelot is not its own kingdom anyway). One thing that has always bothered me is Catherby, Camelot, and Seer’s Village all sort of… blend together. It is important to put empty space between destinations to really make these locations their own. The original concepts from 2017 put Camelot into the mountain, which would still put it very close to Catherby. 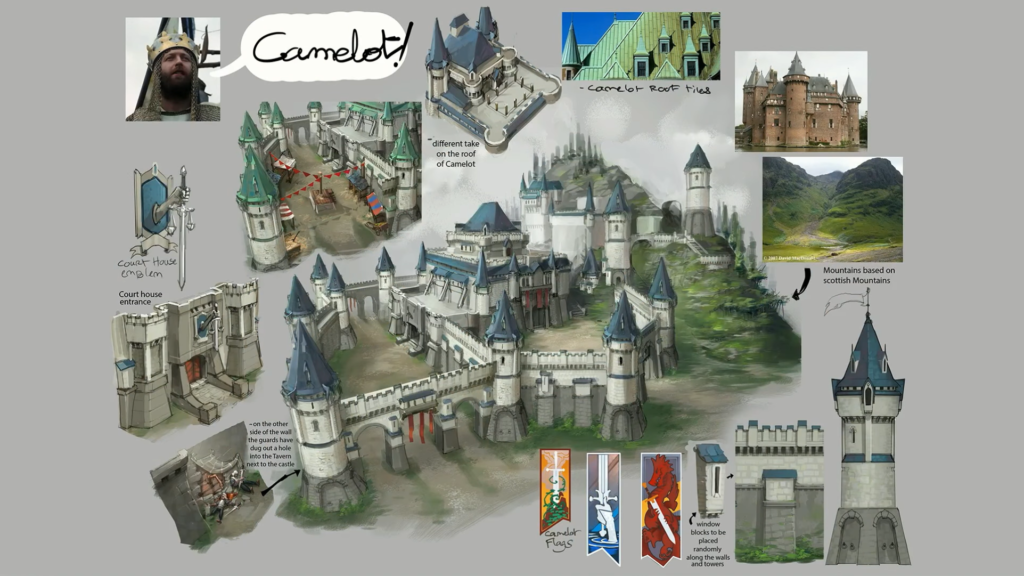 As an alternative, Camelot could be moved to the other side of Seer’s Village, making McGrubor’s Wood smaller in the process, or take the place of the Ranged Guild. The Ranged Guild – in either case – could be merged with Camelot, giving it a more Robin Hood like integration with the larger castle.

Moving Camelot out of the way creates a better empty area around Seer’s Village, giving it its own area. Seer’s Village can turn into the castle town that often surrounds castles, but it needs to be given function. Add some new court cases, for example, or do something interesting with an Elemental Workshop sequel, giving a big reward (perhaps Runecrafting related) that makes it worth coming back to this area. Older Divination colonies are often not very useful, but having more content that requires the combination of all different tiers of energies might have people come back more often. Finally, make Seer’s Village the best place to pick and spin flax, and find a new use for the mining carts.

There are so many unique features in Seer’s Village that many of us have probably forgotten. By relocating things, and capitalizing on what is already there, we can have more content, that integrates with the world. Digsites aren’t the only way to bring life and function to an area: there are 28 skills to choose from.

Are graphical reworks necessary? Not really. Area reworks on the other hand, a graphical rework that also revitalizes the function and relevance of an area, are. They bring the interconnectedness of the RuneScape world back, and make for a more complex and interesting world to play in. It is time to stop adding new areas, and to start making what’s already there better for new and existing players alike.

Alex’s Analysis – The End of a Good Thing

posted by Alex 43 on 23rd September 2021, at 10:00am | Discuss Article
This week came an update that was nearly 20 years in the making. Multicannons, an artifact from the times of RuneScape Classic, famous for being the most expensive weapon the game had to offer, have been updated to be a single-slot item rather than a 4-slot component. … … yeah, that’s it. Multicannons are now […]

posted by BearsOP on 17th September 2021, at 9:00am | Discuss Article
The Arch Glacor has been out a couple weeks, and there are not many non bug related complaints. No one is saying the boss is too easy and no one is saying it is too hard. This is because the boss is scalable. The scalable aspect makes it so you can AFK the boss if […]

posted by Derp on 13th September 2021, at 3:41am | Discuss Article
This month saw the release of the Glacor Front of the Elder God Wars Dungeon. In this article, I will take you through what we know about the Glacors and their home planet of Leng. This article will contain spoilers regarding Archaeology mysteries introduced with the Senntisten Digsite, so if you do not wish to […]

posted by Alex 43 on 2nd September 2021, at 2:40am | Discuss Article
Got a quick one for y’all regarding Archaeology and the lore it offers. If you’re here for actual Runescape lore, then you’re in the wrong place. Instead, I’m here to talk to you guys about the act of “finding” the lore in Archaeology, and what these methods mean. How Archaeology works is that you set […]