This month’s instalment of Forgotten Lore is especially dear to me, as it concerns one of my favourite RuneScape lore-related topics: Robert the Strong! I’ve been desperately awaiting more lore content about the guy, as I believe his name (or a reference to it) hasn’t been seen since 2015. Having said that, what do we know about him? 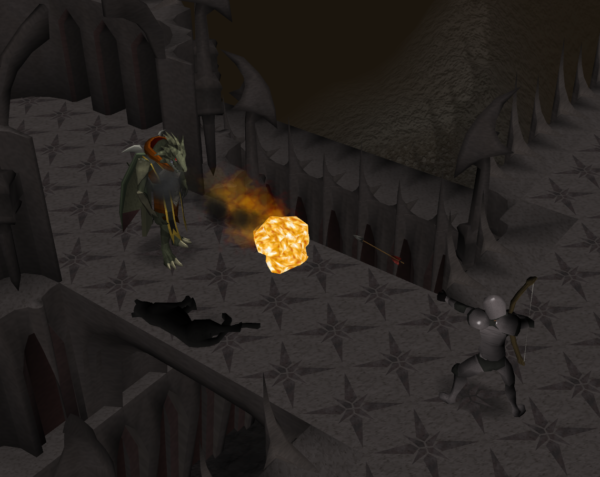 The character of Robert the Strong was introduced with the quest A Tail of Two Cats back in 2005. In this quest, it is revealed that Bob the Cat is actually the feline reincarnation of a Fourth-Age Dragonkin slayer by the name of, you guessed it, Robert the Strong. Other than that, this quest doesn’t particularly contain lots of information about him. We see him attack and defeat a Dragonkin in the Dragonkin castle located in limbo, although the Dragonkin does manage to defeat Robert’s companion, his pet panther Odysseus.

Robert the Strong had his next cameo in a pretty important quest called Ritual of the Mahjarrat, which released in 2011. In this quest, the player ventures to the planet of Kethsi, which is located close to the Aviansie homeworld of Abbinah. We learn about the once prosperous civilization that had lived on Kethsi prior to the civilization’s destruction at the hands of the Dragonkin, who were enraged by the Kethsians’ false usage of the Stone of Jas. Robert the Strong visited this planet in search of weaponry that could properly harm the Dragonkin, and his search succeeded when he found a cache of bane ammunition. Later, with the release of adamant and rune dragons in 2015, we discovered a Dragonkin laboratory on Kethsi, at the top of a dormant volcano known as Mount Firewake. The Dragonkin who owned the laboratory, Forcae, wrote in his journal about Robert the Strong stealing something from said laboratory, and that he would use his rune dragons to enact revenge on our beloved hero.

On Kethsi, Robert the Strong left a few items for the player to find. There are two sets of notes, and these notes reveal that Robert was aware of his destiny to be reincarnated as a cat. In the first set, Robert asks the player to return the second set of notes to Robert once he is back in his human form, and that this task is essential for the future defeat of ‘the enemy’, which can only be presumed to mean the Dragonkin. Additionally, he encloses a necklace crafted by his girlfriend Ilsinor, which would serve as a means to convince future Robert of the legitimacy of the notes. Mod Raven has suggested these notes will be used in some piece of future content. If we can assume that this has not been forgotten and is still planned for some later point in time, then this probably means the Dragonkin will return as important antagonists in the future.

Robert the Strong features in only one other quest in RuneScape’s history, and this is the quest One of a Kind. In this quest, it is revealed that Robert came across the petrified form of the legendary Ilujanka Hannibus, who had been turned to stone presumably by Enakhra. Robert had taken the statue of Hannibus to his library in Burthorpe, where he worked on producing a spell that would reverse the petrification. Unfortunately, Robert the Strong never completed the task. In the quest, the player discovers Robert’s library, finishes the spell and revives Hannibus.

What happens in the remainder of the quest isn’t of particular interest for us at this time; what is interesting, however, is the collection of books contained in Robert’s library. The first of these books is a Dragonkin primer written by Robert the Strong, which is used in later Dragonkin content by the player to decipher various messages and texts written in the Dragonkin language. Alongside this primer, the library contains two texts entitled Flight of the Dragonkin and The Young Robert, which provide us with background information on Robert the Strong.

In these texts, it is revealed that Robert the Strong is not native to Gielinor; instead, he was born on the human homeplanet of Teragard into a family of librarians. Teragard was ruled by seven Magisters, and they drew their power from a mystical object known as the Schism. Robert was intrigued by the Schism, and one night, he couldn’t resist his curiosity and he broke into the cathedral where the Schism was located. He discovered the Schism was, by his description, a “great black hole surrounded by a corona of red crackling lightning, that arched to nearby obelisks that stored the energy.” Robert mentions that he felt that the Schism “called to him, whispering promises of other places and other stories” and that “before he even knew what he was doing, he had stepped into the blackness and found himself in another world” – Gielinor.

Now, I don’t mean to jump to conclusions, but there’s some strange Xau-Tak/Vos-related tingle that goes off in my brain whenever I read a text that contains passages about an alluring, whispering darkness. And with that extremely tenuous connection, I will conclude this month’s edition of Forgotten Lore. I mean, who knows, maybe Robert the Strong is connected to Xau-Tak and Erebus, and his return will come a lot sooner than expected?

posted by BearsOP on 8th March 2022, at 3:29pm | Discuss Article
RuneScape is a multiplayer game that a lot of people tend to play solo, so here are some clan event ideas to get multiplayer action. Clans are how a lot of people meet there in-game friends and where a lot of discussions are. So hosting a clan event usually leads to meeting new people, engaging […]