Before I begin, let me once again warn you guys that I will be spoiling some of the quest material for the newest Runescape quest (at the time of writing this), so I would highly recommend you play the quest to its entirety before reading. Don’t worry; I am very patient.

Oh good, you’re back! Whew! I was going crazy in here! 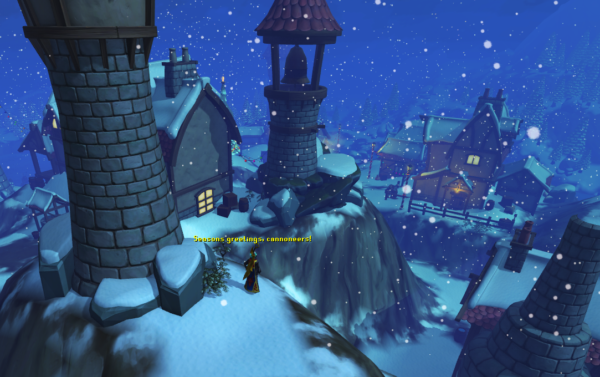 Alright. Christmas is here, and even the great minds at Jagex need their holiday relaxation time. Time to spend with friends, family, inside, and not outside in the snow (they get snow there too, FYI). Y’know, unless it’s moderately warm and the snow is sticky enough for a properly sized snowball and the back of your friends head is just itching with forgiveness.

Usually we get a holiday event of some kind to celebrate the holiday. Nothing too fancy; usually a set of mini-games that are either simple or reuse some popular puzzle mechanics of a quest you have done before. But with a different theme to it. Usually, it’s snow and ice, or colorful interiors with bell-filled atmospheric music.

You can see where I’m getting at. Rarely in a Christmas event is there conflict or fighting.

This year, we have been treated to a brand new quest. One that is entirely Christmas themed.

And here’s the actual summary of the quest:

… yeah. This quest is exactly, perfectly, what it says on the tin. There are no surprises. No sudden conflicts or combat. No real character development or deliberative choice-making. No twists or changes or sudden character introductions or… really any cameos apart from the odd reference. It’s just you, Violet, and her father, going to the yeti village, solving puzzles and helping Violet along as she gets her mind blown by the awesome graphics and soundtrack.

Seriously, the quest looks fantastic. It’s got a whole new area and town and everything, all custom-modeled and detailed.

But the story is as cheesy and corny as one would expect. This quest seemed to be more tailored towards a much younger audience because of how easy-going it is. The puzzles are super straight-forward and easy to figure out, and Violet’s father has always got advice on hand. The majority of the quest is grabbing stuff from the surroundings and making it do stuff, and quite often you figure out what you’re supposed to do halfway through by accident.

Heck, part of the grab is that it’s a “magical adventure”, yet there really isn’t that much magic involved. After completing the quest, I felt more as though we had simply gone for a hike in the mountain down the tourist trail rather than have a life-changing experience.

Quest-wise, that would be a big problem.

Were it not for one simple little fact.

Yeah. Christmas is cheesy. It’s easy-going. It’s happy and jolly and kid-friendly and there’s smiles everywhere and 90% of Christmas-themed cartoons or spin-offs always always end on that high note. You go into a store or turn on the radio and it’s the same music since the 70, 80, and 90s, but maybe with an added instrument somewhere. 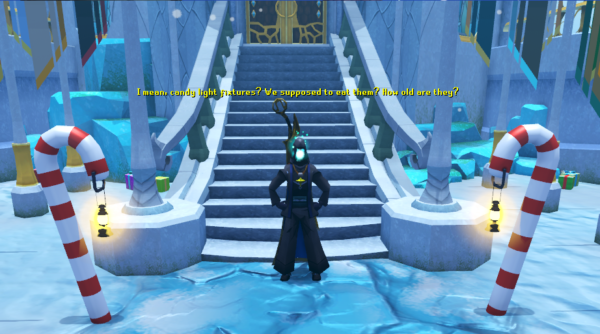 But that’s what we, as the public, like about Christmas. It’s familiar. It is something we enjoyed as a kid very much, and it brings back a lot of nostalgia when it comes around again. By living it only once a year, it stays reasonably fresh and enjoyable, and to those who have kids, it gives them something to look forward to at the end of the year so they too can have those nostalgic benefits.

… and it’s a good medium for selling stuff, let’s not deny it.

And this quest is perfect for this sort of event. It captures the mood and helps you just have a nice, chill questing experience while helping to keep the theme that the month’s festivities have to offer. If you haven’t done it yet (why the heck did you even keep on reading?!), do it. Do it before Christmas, or if you’re too late, save it for next year’s holidays. If you do it at any other time of the year… you’re not gonna like it.

Either way, enjoy the holidays. I know I will. 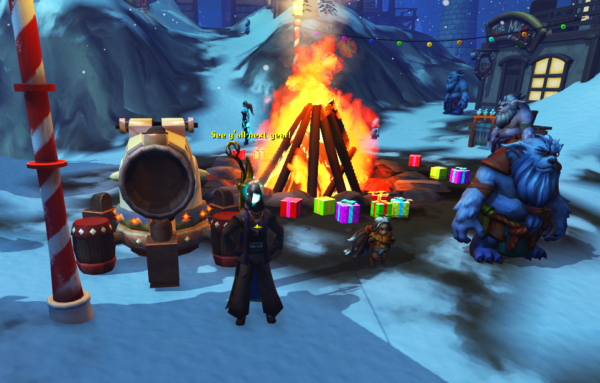 posted by Alex 43 on 12th October 2018, at 2:54am | Discuss Article
Yay, holidays! The time of the year where we take some age-old tradition that, more often than we like, has a somewhat dark origin, and we celebrate it all the positive parts of it! Because it’s neat and everyone’s been doing it for a while and they caught on because nobody had anything better to […]

posted by Alex 43 on 27th April 2017, at 12:00pm | Discuss Article
The spring-time holiday event is here, and Runescape’s released something that’s somewhat new to the whole shebang (real word; look it up). A big giant Fayre! With games and prizes and attractions. A bit on the meager side with only a handful of rides (and no roller coasters; lame!), but it is a holiday event. […]

Alex’s Analysis – Simple as it Sounds

posted by Alex 43 on 25th October 2014, at 2:42am | Discuss Article
I enjoy the holidays like everyone else does. I am benefitted in some unique way, be it either I get presents, a day off from work, or enough candies to put me into cardiac arrest mid-bite. Some holidays even come with their own specially themed events that change the face of my favourite stores, my […]

posted by Alex 43 on 22nd December 2013, at 3:04am | Discuss Article
Christmas is almost here, and with that, the celebration of a new year and the humble beginnings of the next. A time where conclusions are made looking back to the past, and resolutions are made in preparation for what is to come. From players to parents, from bums to businessmen, everyone’s got something to look […]