In light of the 20th anniversary of RuneScape, everyone reminisces about their first moments as a player. When I became a RuneScape member for the first time, I went on a questing spree, starting with the Hazeel Cult quest.  Back then, of course, Hazeel was not like we know him today. In the old days, Hazeel was just a big bad mage, and the main enemy of Ardougne. This, of course, has been reworked by Jagex to make Hazeel fit in possibly the biggest storyline of the game. So, for this instalment, I present to you: Hazeel the Mahjarrat (?)

Back in the good old Freneskae days, there were a few native tribes. Among these tribes were the Chelon-Mah, Mahjarrat, Mahserrat and the Mahkorat. All of the tribes suffered the curse that is the Rejuvenation ritual.  In order for the Freneskae natives to rejuvenate, they had to sacrifice one another. Seeing as none of the tribes wanted to sacrifice their own kind, conflict ensued. Because the Mahserrat refused to participate in this mad ritual, they became priority targets for the other tribes to use as a sacrifice. Among the Mahserrat was someone called Hazeel. Hazeel saw the end of his kind coming and decided to forsake his own tribe and join the Mahjarrat. He even went as far as permanently growing some horns to distinguish himself from the Mahserrat. From this moment on, Hazeel was a Mahjarrat by loyalty and his story intertwines with theirs.

As you all know, the Mahjarrat travelled to Gielinor to aid Icthlarin in his war against Zaros. During this war, it is known that Hazeel and the Menaphite armies successfully fought against the Zarosian armies. However, due to a dispute between Sliske and Icthlarin, the Mahjarrat switched sides and joined Zaros. In the Zarosian army, he obtained the rank of Legatus. One desperate Tumeken explosion and one Azzanadra shield later, many of the Mahjarrat died. Hazeel was among the living and continued fighting in the war. Later, Hazeel made an appearance when a fierce warrior named Torva destroyed the attacking flock of Ripper demons. Even after yelling “when you need something done right, you need to do it yourself”, he failed to kill Torva, causing Nex to be interested in recruiting Torva.

Fast forwarding some time to the great Zamorak betrayal, Hazeel’s job was to keep the Zarosian followers at bay while Zamorak stabbed the Empty Lord. After Zamorak’s ascension and the beginning of the God Wars, Hazeel was known as a loyal and feared Zamorakian warrior. Though not many details of his actions during the God Wars are known. It is known that Hazeel became the new-born Khazard’s tutor. Khazard’s mother Palkeera died soon after Khazard’s birth. After the God Wars ended and all of the gods were banished from the planet, Khazard and Hazeel fought together against the Saradominist armies in Kandarin. Their efforts were very successful, as they conquered almost all of Kandarin.

In the early years of the Fifth Age, a group of Saradominists assaulted Hazeel’s mansion and killed everyone inside. They were unable to kill Hazeel, though, but they managed to disable him and put him into a torpor state. The Carnilleans, leaders of the assault, claimed the mansion and ruled the city of Ardougne which was constructed not long after. 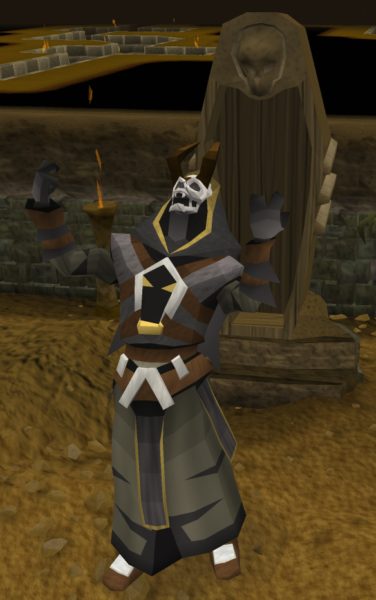 We’ve finally reached the present of this story. Here’s where things get tricky. During the quest Hazeel Cult, the player is given a choice. Will they aid the Carnilleans or will our hero choose Hazeel’s side? If they sided with Hazeel’s cult, Hazeel will return and travel north to join the upcoming ritual of Rejuvenation. If not, Hazeel will remain in his coffin and not be able to attend the ritual. During the ritual, assuming Hazeel was resurrected in time, he joined forces with the other Zamorakian Mahjarrat. It clearly shows Hazeel and Khazard are close to each other as they stand together at all times, whether it being political debate or combat. It’s also shown that Hazeel has little love for his other Zamorakian Mahjarrat friends as he didn’t really care when Lucien was killed by the Dragonkin. Later, in the Sixth age during Sliske’s grand ascension, he again showed this indifference when the Zamorakian Mahjarrat were refused access to the citadel.

Thankfully, the two split branches of story somewhat come together when Zamorak gathers a group of specialists to steal the Stone of Jas from Sliske in Dishonour among Thieves. If Hazeel was freed by the now World Guardian, he is happy to help Zamorak and likes the idea of having his savior on their side. If the World Guardian didn’t free Hazeel, it will show that Hazeel has missed the ritual and still has his skeletal face, unlike the other rejuvenated Mahjarrat. That doesn’t matter, though, as Hazeel has returned without any help but the power of love and friendship when he sensed Zamorak’s return. Before joining the party in Daemonheim, Hazeel requests the World Guardian to free his furry friend Jerrod from the Ardougne prison. During the heist, Hazeel and Khazard show they have some control over the Shadow Realm and are therefore able to spot Sliske’s shadow orbs. In the end, the heist somewhat fails, but Zamorak is able to use the Stone briefly to regain his lost power. Hazeel had shown to be loyal to Zamorak, and the god is pleased with his contribution.

The Mahjarrat’s powers were draining at a fast pace, and a new ritual was required. The only Mahjarrat not to show up to this ritual was Sliske. At the ritual site, Zaros and Zamorak appeared, claiming they had similar issues with their power draining. Zaros devised a plan to do one last ritual to end all rituals. Though Zamorak didn’t like the idea of helping Zaros, he finally agreed to Zaros’ deal thanks to Hazeel persuading him. At the end of the ritual, they sacrificed the elder god Mah and their Rejuvenation issues were over. After the ritual, Hazeel claims he will use his newly obtained power to make his cult great again and reclaim the Shadow World, the latter being quite ambitious as Sliske’s control over the Shadow Realm is unrivalled at that point.

This is where the story ends for now. Hazeel is a powerful Mahjarrat/Mahserrat who always seems to do the dirty work in combat when others like Azzanadra and Sliske are more cunning. He is mostly known to be a father figure to Khazard, and Zamorak sees Hazeel as a brother. This is quite interesting seeing as during the last ritual, it is revealed that Zamorak is Khazard’s actual father. In my opinion, Hazeel is a cool and mostly overlooked Mahjarrat who is more of a side character to the whole Mahjarrat soap drama. Hazeel does show, however, he doesn’t like the drama too much as he’s indifferent to almost anything Mahjarrat related that doesn’t concern himself, Khazard or Zamorak. One final note of trivia: during Dimension of Disaster (non-canon), Zemouregal reveals that Hazeel became king of Ardougne with the help of Phillipe Carnillean, who turned out to be a rebel because he never met the World Guardian.

Unpacking the 2021 Sale of Jagex

posted by Shane on 4th February 2021, at 3:18am | Discuss Article
Jagex has been sold yet again. 9 months ago I wrote describing the mysterious sale of Jagex to Macarthur Fortune Holding LLC. In late January 2021 we learnt that Jagex was sold again, this time to The Carlyle Group. The Carlyle Group is an American based investment firm. The Carlyle Group has a multi-billion dollar […]

posted by Shane on 1st May 2020, at 4:49pm | Discuss Article
On April 28, 2020 Jagex announced that the company had been sold. A deal that has been in the works for months that has been completed. Macarthur Fortune Holding LLC bought Jagex through one of its funds, Platinum Fortune LP, for $530m USD. Jagex was last sold for $300m in 2016 to Shandong Hongda Mining […]

5 Steps to Harmony with Jagex

posted by Shane on 12th April 2018, at 3:20pm | Discuss Article
Jagex has always been the victim of the swinging pendulum known as the RuneScape community. There are days where the community loves Jagex and there are days where the community absolutely loathes Jagex. Keeping the pendulum in balance results in harmony for both sides. Here at Informer and Update we would like to believe that […]