On April 28, 2020 Jagex announced that the company had been sold. A deal that has been in the works for months that has been completed. Macarthur Fortune Holding LLC bought Jagex through one of its funds, Platinum Fortune LP, for $530m USD. Jagex was last sold for $300m in 2016 to Shandong Hongda Mining Co Ltd and was held by Fukong Interactive. While this deal looks simple on paper, there’s a lot to unpack.

Early indications are that not much will change for players in the short term. This is something that everyone who plays either RuneScape 3 or Old School can take comfort in. As with most corporate changeovers though, there is the chance that in the medium term we may see changes at Jagex since nothing in the corporate world is for certain. But as with most changes, there are a series of unintended consequences and unknowns to us as the player base.

Platinum Fortune LP was founded in April 2019, and Macarthur Fortune Holding LLC was founded in February 2020. Both of these companies are incredibly vague online. This means that there is no website for either of them, no filed documents, and no list of directors. While these are private companies that are not required to disclose anything, what is slightly odd and perhaps worrying is that these companies were founded all within the time window of the Hongda Mining Company and Fukong wanting to sell off assets.

Looking further into this, another holdings company came in named Plutos Sama Holdings Inc. last year. Based on translations of the initial sales documents and Plutos Sama Holdings announcement it appears as though Plutos Sama was brought in to oversee the sale of the assets in question. It was decided that Platinum Fortune would be the “ultimate transferee” of the major asset in question. The question we were now wondering is: where does Macarthur come in?

In February 2020 Plutos Sama Holdings transferred 100% ownership of what is Jagex and Hongtou Network to Macarthur Fortune Holding LLC. These changes can be seen in the translated March 2020 Fukong Interactive Board of Directors meeting notes. Now if Macarthur Fortune Holding had been founded prior to February 2020 this would be the end of this story but the way the sale happened raises more questions.

The language of the translated document suggests shady business practices by Fukong’s parent company and being forced to sell assets; this is why Plutos Sama Holdings was brought in. The language used in the translated document suggests that there wasn’t actually a sale, merely a transfer. What this means is that we end up with a corporate entity chart that looks like this: 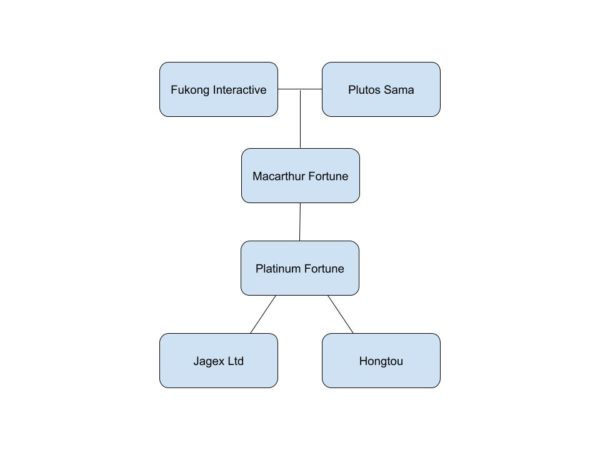 Due to the necessary corporate reporting in the UK, all that needs to be known for the sake of the legal entity of Jagex Ltd in the UK is that they are owned by Platinum Fortune LP, a registered company in the United States. The sale amount also raises questions because if you as a corporation can report that you bought something a few years back for $300m but sold for $530m, that’s great! On the flip side, the worth of Jagex could be substantially less than the $530m it was bought for, letting the companies in question use the sale profits to write off corporate debt. This should be concerning to the employees of Jagex over time if this is what the fate of the company is to be.

We are currently working off of rough translations and documents aimed at a corporate legal audience. That doesn’t change the fact that big questions exist about both Macarthur and Platinum that could be addressed by a statement from the directors. At this point players should not worry in the short term but out of all of the owners of Jagex Ltd, these are by far the most mysterious.