The scalable aspect makes it so you can AFK the boss if you want or it can be at the point where you are camping full tank armour and still die if you miss a prayer flick. At the highest enrage it is the hardest boss in the game but in normal mode with no mechanics it is the easiest boss in the game.

The boss has 5 mechanics which are, flurry, pillars, minions, exposed core and frost cannon. When doing the boss in normal mode any of these mechanics can be turned off before the fight. This helps lower levels and people new to PVM learn how to deal with them. A person learning can go into the fight with only flurry on and work on prayer flicking. Once they feel comfortable with that, maybe they add the ice cannon to be ready to learn to use resonance. After they have mastered that, they can turn on minions to learn to deal AOE damage. 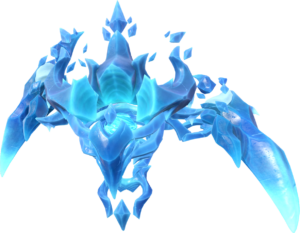 Next could be exposed core to learn how to get a good burst of damage on the arms. Lastly would be pillars, this helps the player learn to move while attacking if using ranged or magic, but melee users can use this mechanic to learn how to dodge damage and stall adrenaline by using defensives. If you have an upgraded pontifex shadow ring it can be worn to reduce damage when the glacor uses his flurry attack and you have the right protect prayer on. The boss would be easiest to learn with ranged if using bak bolts or magic. Melee is tough due to some of the mechanics forcing you to move away from the boss and not be in melee distance.

After the player kills the boss with all 5 mechanics active they unlock hard mode. Hard mode has the same 5 mechanics but it adds streaking and enrage. Streaking means instead of looting after 1 kill you can risk your loot and keep killing the boss. The longer your streak the more loot you will get, but also the boss gets harder. The boss at 0% enrage is much harder than normal mode as there is more HP on the arms, the minions and the ice cannon hits three times instead of once. There is a big skill gap between normal mode and hard mode. Some things that will help bridge the gap are, perks on both weapons and armour, an ability bar that is optimized, cinderbanes, weapon poison and if ranged using ruby or emerald bak bolts.

The fight from 0% to 250% is all the same except getting hit a tad harder and the boss having more HP as you go but once you hit 250% a fifth minion spawns that has more HP then the other four. After 250% there are no changes to the mechanics at all, just more hp and more damage. This makes the fights from 250%-500% about the same except a tad longer. Starting around 500% to 700% is when you miss one prayer flick during flurry it is an instant kill, depending on the style you are wearing and what style you get hit with.

Going forward I would love to see the ability to turn off mechanics at bosses. It was so great to see all the new PVMers ready to fight on release day and still there throughout the week. It was great to hear how some people went from 0 mechanics to struggling with 3 mechanics later that day to getting all 5 mechanics down by the end of the week, and wanting to try hard mode.

It was also great to see the race for highest enrage for the higher end PVMers. At the time of writing this article no one has reached 4k yet but it will probably be done by the end of the month. That being said most of the high end PVMers are sitting anywhere from 800-1500% depending on how motivated they are.

This boss has changed how Runescape players can look at bosses. Can every boss moving forward match the scalability of the glacor? If so, then maybe they go back and change some of the older bosses to be scalable.