As promised in Forgotten Lore VI, this instalment will be all about two of the twelve Elder Artefacts: the Siphon and the Blade. They function (to some extent) as counterparts, and both have the interesting property that they have a rich background story that deserves to be told. And it will be told today! 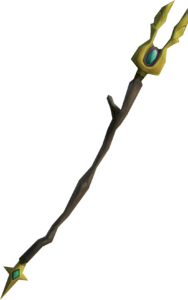 First off, we have the Siphon. It is more widely known as the Staff of Armadyl, after its most famous user Armadyl. It is conjectured that this staff was involved in Armadyl’s ascension to Godhood, but we won’t know until the quest that may not be named, or its development will be delayed by another month (it rhymes with Pite of Rassage, though). It has a number of uses as an Elder Artefacts, the most important in which is the ability to fuse elements cleanly and with precision. Secondly, it can be a used as a means to transfer power, possibly inadvertently; the most obvious example of this is when Zamorak used the Siphon to impale Zaros, which caused Zamorak to ascend by siphoning some of Zaros’ power to him. Sliske pulls the same trick in Sliske’s Endgame when he transfers some of his essence into the World Guardian. The third use of the Siphon is more obscure, though; it can be used to comprehend and manipulate the relationships between the nature of things. This sounds extremely vague, but this is exactly the way Lucien describes it in the transcription of his Mahjarrat Memory. It is believed that this ability made it possible for Zaros to curse the allies of Zamorak who aided him in the assassination attempt; the Siphon allowed Zaros to see the metaphysical links that connected everything, allowing him to curse those responsible for the Siphon falling into Zamorak’s hands.

The Siphon has appeared often in the quests of RuneScape. It was first stolen by Lucien from the Temple of Ikov (with or without the help of the player character). After Lucien’s power trip, the Dragonkin took off with the staff, but not for long; Sliske tricked the Dragonkin tasked with guarding the staff, Strisath, and consequently used it to kill Guthix and propel Gielinor into the Sixth Age. After Sliske’s God-killing competition, the staff was believed to be lost, but it is revealed in Desperate Times that the Dragonkin Kerapac managed to get a hold of it after the collapse of Sliske’s maze in Sliske’s Endgame. Kerapac used the staff, alongside another Elder Artefact known as the Needle (but more on that in some future instalment), for his own nefarious ends in Desperate Times and its sequel Desperate Measures, but his plans were ultimately foiled when he was taken prisoner by the Elder God Jas. The whereabouts of the Siphon are currently unknown, but it’s likely in Jas’ possession.

Secondly, we have the Blade. It has the power to separate elements cleanly and with precision, and in this sense, it is the Siphon’s counterpart. Contrary to the Siphon, however, it hasn’t been in a single spotlight ever in the history of RuneScape quests. During the events of The World Wakes, the player character discovers the Blade, lying shattered on a table in Guthix’ cave. In fact, that’s where the Blade resides to this day! However, the Blade had seen better days, primarily in the hands of Guthix. Guthix mainly used the second known power of the Blade, namely its ability to cut through the fabric of space and time to open portals between planes. Guthix came across the Blade when his homeworld of Naragun became the battleground for two Gods, Tuska and Skargaroth. Skargaroth used the Blade to blind one of Tuska’s eyes. In retaliation, Tuska attacked Skargaroth with such force that he stumbled and caused the collapse of Guthix’ storm cellar, with Guthix’ daughter Aagi inside. This resulted in her death. Skargaroth had dropped the Blade during the stumbling, and in his anger, Guthix picked up the sword, blinded Tuska in her other eye and stabbed Skargaroth, killing him and causing Guthix to ascend.

After the ravaging of his homeworld, Guthix travelled the cosmos with the help of the Blade, discovering many worlds. One world we have talked about in a previous instalment of Forgotten Lore is Renmark, a magical world with a parasite at its core. Guthix attempted to use the Blade to cut away this parasite; however, this attempt failed, and rather than killing the parasite, he quite literally caused the planet of Renmark to explode, freeing the parasite in the process. Eventually, Guthix discovered Gielinor. He wasn’t done travelling, though, but he hadn’t properly learned from his mishap with Renmark; he managed to shatter the Blade when he cut too deep into the fabric of space and time, inadvertently piercing the Void. This caused Void pests to swarm unto Gielinor, and Guthix tasked the tortoise Valluta with defending Gielinor against these pests. The effects of this are felt to this day, as the Void Knights are still actively aiding Valluta in the defence of Gielinor against these Void pests.

Much to Guthix’ dismay, the Blade seemed irreparable. Nevertheless, he found a use for its shards when he harnessed the power of the Stone of Jas to create the World Gate. Guthix used the World Gate to stabilize some of the gaps he had created in his cutting of the fabric of space and time. Also, the World Gate facilitated the migration to Gielinor of many races that were previously scattered throughout the universe. More recently, during the Archaeology-related exploration of the Stormguard Citadel, the World Guardian attained the knowledge to turn one of the Blade’s shards into an Archaeology relic known as the Subtle Blade, unlocking the Abyssal Link relic power. It is believed that the Blade can only be restored to its former glory at the hands of an Elder God, so it might – at long last – get its spotlight soon in the Elder God Wars storyline.

posted by Colton on 31st December 2016, at 5:10pm | Discuss Article
**Raises head from desk jerkily, leaving drool marks on the keyboard** Wh-Who’s there? Don’t make me go back in the maze again! PLEASE! **Head slams back onto the desk and snoring ensues for next week** Is… is it over? Oh thank heavens, it’s you. What, you want me to give you an extensive article over […]

posted by Jasonmrc on 30th August 2010, at 12:00pm | 1 Comment
This month we’re going to see what new items have been added which are great for magic defence. You can read last year’s article to see what was the best then. Magic Helm Ever wanted to be an angel? Well now you can be an angel while having the best magical defence helmet. The god […]

posted by Jasonmrc on 13th April 2009, at 6:29pm | 2 Comments
Last month I wrote about Melee defence, this week I’ll be talking about Magic defence. I was initially going to do Ranged defence this time, but since much of the ranged defence armor is the same as the melee defence armor I thought I should wait a month and do Magic instead to give some […]