Wh-Who’s there? Don’t make me go back in the maze again! PLEASE!

Is… is it over? Oh thank heavens, it’s you. What, you want me to give you an extensive article over the harrowing journey I just moments ago completed? Oh, you say it’s been a week? My, my, I must have been hit harder by that quest more than I had thought. Well, let’s dig in!

SPOILER ALERT: Spoilers for Sliske’s Endgame will be present in the proceeding article. Proceed with caution. Also, if you don’t like frustrating labyrinths, just don’t. That’s all.

Just a mere month ago we did an extensive look regarding the penultimate installment into this punchy Sixth Age questline, and already our questions have been resolved. Last month we were left with Zaros and Zamorak bonding together (however reluctantly) to pull something off at the Endgame, the death of Mah, and Seren’s pitting herself firmly against Zaros and his plans. Will they come to a fulfilling end? Well… we’ll see…

To begin the quest, talk to Relomia in Draynor after she has stalked you courier-style and handed you an invitation. From there, the character is instructed to seek out Armadyl, Saradomin, Zamorak, Seren, Zaros, Ichthlarin, and Death in order to proffer invitation to Sliske’s Endgame ceremony. This section of the quest is easily the best and offers a ton of lore-heavy dialogue options that can take a couple hours to exhaust.

Armadyl can be found in his world event tower and reveals some previously unknown information about his past, his views on the gods (especially Zaros), and his sexuality. Personally, I found the choice to make Armadyl a gay character to be a misstep. My own personal beliefs notwithstanding, I just found it awkwardly done. Armadyl is a character that has been in the spotlight for years now and has been on Gielinor physically for over 3 years. We’ve come to know a lot about this character and all of a sudden, *poof*, he’s fabulous. Again, I’m not trying to say it would be bad in any scenario, I’m simply offering my opinion that the character, the timing, and the dialogue used to expose this rather sensitive information was rather shoe-horned. Regardless of how you internalized that nugget of backstory, we now make our way to the big blue guy!

Saradomin is in the White Knight’s Castle and is pretty closed off. I was a jerk to him. Not much came of that conversation! Zamorak is hanging out in the fancy new Black Knight’s Fortress, and also plays it rather close to the chest. He reveals that his plans are consistent with his “strength through chaos” mantra, but not much else. Upon entering Death’s office, we find both Itchy and Death hanging out, just waiting for the World Guardian to drop by! Neither of them will seek the Stone, and instead, wish to support you completely.

Although we do not know the whereabouts of Zaros, we know Seren will be in her tower in Prifddinas. Just as the character climbs the steps to where she should be, who do we find there with her but her sweet brother, Zaros! There’s a bit of tension here as Zaros and Seren both argue back and forth, but they both eventually accept the invitation and you’re on your way to the Endgame! 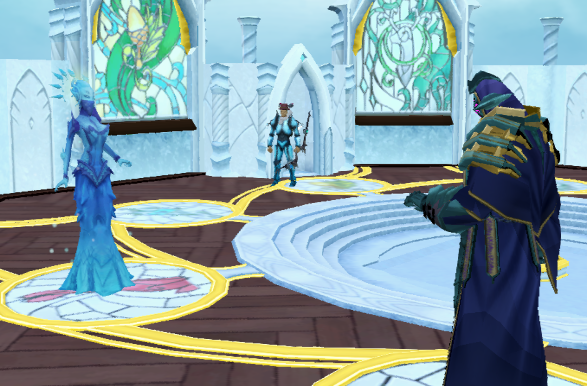 Sliske has all in the running gather at the Heart of Gielinor before the games begin, and surprises most by tossing the collective hats of the Dragonkin into the race for the Stone in addition to the figures previously invited. After this, Marimbo and Brassica Prime take their leave and concede, as Brassica knows that the cabbage of a thousand truths is of no use to his deliciousness. Before we can start the games, though, the World Guardian must fight… Nomad. Again… This part is where things start to get wonky. Why do we have to fight Nomad again? Because Sliske used some of our soul to make another “world guardian” in his wight? This battle was extremely inorganic and felt like they just wanted to throw something else at us before the real torture began.

After you send Nomad’s weary and pathetic soul back to the underworld for a third time, the contestants are tossed into Sliske’s devious labyrinth! We’re told to look for the rooms with purple glowing stuff around it, but the minimap will only show one quadrant of the larger map at a time. Not only that but the instructions are extremely unclear. The developers tried to instill a sense of urgency by saying that we were in some sort of race with the other contestants, but all this does for someone not using a guide is to send them into a frenzy and not read thoroughly the small amount of instruction given. Before I keep going, I’m just going to say that this maze had potential, but had massive problems that kept it from being even somewhat satisfying. Crucial cutscenes could be completely missed by an errant click, camera angles were way off, several puzzles literally demanded they be brute-forced, you can get stuck in walls, and much more. This whole thing was fun for maybe 15 minutes, and then it just became frustrating. I chose not to use a guide and the mazes (yes, there are two) took me roughly 4-5 hours. That is not acceptable. You can’t claim that this new quest is “the longest yet!” because you’ve added this ridiculous maze which will piss off all who attempt it with and without a guide and take hours simply because it has the appearance of complexity. Not to drone on, but good heavens, this was not fun. 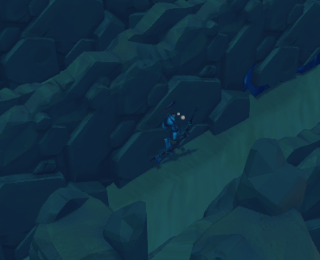 Several cutscenes occur during the maze sequence, most of them based on various competitors running into one another. Also, Armadyl shows up a lot. This quest is definitely trying to push Armadyl for some reason, but that’s none of my business. Anyhow, once you’ve emerged from the pits of Hades, you now get to race a god for the Stone (Armadyl for most, Saradomin for some, Zammy for fewer still)! And if you don’t notice the devices used to slow the god down, you’ll probably lose! But regardless of whether you win or lose, Zaros and Seren pop in and chat with whoever won. Based on which god or character won as well as based on different choices made in previous quests from the Sixth Age storyline, there are around a dozen possible ways this sequence will play out between whether Zaros or Seren’s ties to the victor will hold true. 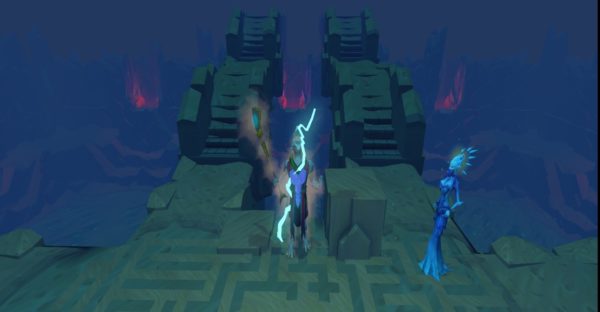 But it doesn’t matter anyway, because, without regard for any decisions previously made, Kerapac still shows up and blows the Stone to pieces. Seriously, you can’t make this stuff up. His plans seemingly foiled, Sliske now tosses a three-tiered battle sequence at the character. First, you fight some wimpy wights and it’s pretty easy to win. Then, he throws in Linza (the new Barrows sibling), Gregorovic, and guess who: Nomad! Why again?? Because.

Defeat these three and it’s now between the World Guardian and the trickster himself. This battle alone features 4 waves of combat that really aren’t a challenge as long as you move around a lot. At the very end, you go all Super Saiyan and harness the power of a “true World Guardian” or some hokey garbage like that and gank Sliske with your unlimited adrenaline superpowers. Again, why? Just for fun, I guess. Once defeated, Sliske fights the World Guardian in a cinematic cutscene where the World Guardian overpowers Sliske and impales him on the Staff of Armadyl. Sliske gets the last laugh, however, as he uses the other side to wound the character as well, creating some strange link between the two before Sliske turns to stone, and crumbles away. 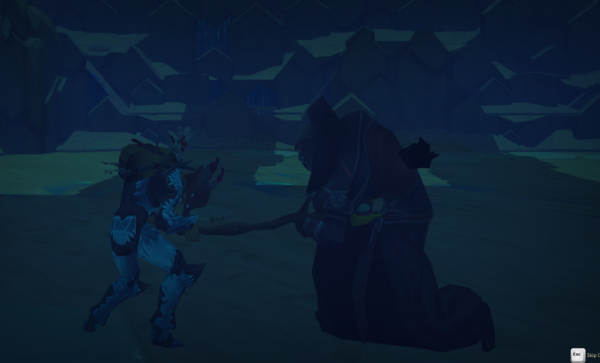 The next scene we encounter is us on a platform with Seren, Zaros, and a strange voice which is revealed to be Jas herself. Zaros demands to be raised to elder godhood to take the place of Mah, but Jas refuses and sends him away along with Seren. Focusing her attention now on the character Jas reveals that she has been behind Sliske’s actions all along. She desires for the other elder gods to wake once more and to create a new series of worlds. However, this would mean the utter ruin of Gielinor, and thus the World Guardian pleads on behalf of all life on it. Jas ends the brief conversation telling us that it is up to us to prove to the elder gods that the life on Gielinor is valuable and should not be destroyed. And our time is ticking…

We then find ourselves back at the encampment and after a few encounters with those that were in the maze, Sliske’s laugh is heard in the player’s mind. Disconcerted, the player continues on to deliver the news to Relomia in Draynor. Here we tell Relomia of Sliske’s defeat, but as she becomes sad the player blacks out, hears the laugh once more, and suddenly Relomia is quite cheery… Quest complete.

What do we take away from this quest? Well, for one, dialogue with gods is awesome. More of that, please. That part of the quest was fun. On the other hand, a long puzzle sequence is not always a good thing and can ruin an otherwise good quest. Also, please never bring back Nomad. That poor guy just needs to die once and for all.

Some larger points of disappointment for me lie not in the mechanics, however, but they were in the lore. Literally, nothing became of the events of the previous quest unless Zamorak won the race at the end, and it seems as though that result was the rarest and purely based on RNG. You can’t just set up a major plot point like that only to have it fall through entirely. Also, Kerapac showing up and blowing up the Stone was really anticlimactic. I think we all knew deep down that no one really was going to get the Stone, but it made all the choices made previously feel incredibly cheap when they were all nullified right after their culmination.

Additionally, this quest felt so disjointed from the others in the series, and I honestly feel that I can say the same about the last 4 or 5 in this series with some confidence. You could tell that each quest was developed by a very different team, and that became a problem. I used to really be an advocate for condensing a questline to a couple years, but little did I realize this would be the result. Quest series’ take time and care to develop organically. If several different teams of developers are working on a story at various stages, it will often cause the story to seem awkward or disconnected which happened so clearly here. From now on, I strongly believe that a team should be assigned a series and that they should keep and nurture it for years to come until its satisfying end comes to be.

However, one thing I did quite enjoy was the dialogue with Jas. I thought her representation was impressive, the syntax she used was intriguing, and the idea that now it is up to us to prove that Gielinor is worth sparing is an interesting one in my mind. Overall, this quest had highs and lows. It just so happened that the biggest low can last up to 5 hours. The lore was wonky and previous decisions felt betrayed or cheapened, but it was by no means a bad series. Despite my own misgivings, I do look forward to the elder god series coming out of this quest and anticipate writing about those installments in the near future.