In continuance of my previous Forgotten Lore article on Leng and the Glacors, I now bring you the lore behind TzKal-Zuk and one of the Elder Artefacts not covered thus far: the Elder Kiln! Inevitably, this means I will also cover some general lore on the TzHaar, so strap in. 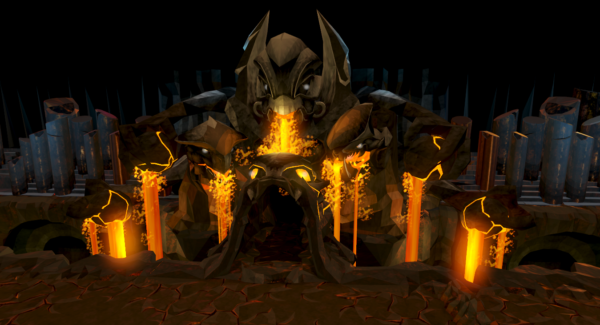 The Elder Kiln is one of the twelve Elder Artefacts, created by the Elder Goddess Ful. The Elder Kiln contains sacred lava, from which the TokHaar are born when the sacred lava meets the sacred clay of a freshly created planet. The TokHaar are servants of the Elder Gods, responsible for shaping the mountains of planets. Contrary to popular belief, the TokHaar are not individual creatures; rather they are a single hive-mind that incarnates into different obsidian bodies depending on the task that needs to be performed. The Xil dug up earth and rock, the Mej blasted the rocks into size for the Ket to carry, and the Hur crafted the rocks into cliff-faces and slopes. After shaping the mountains and building the Elder Halls of this cycle’s perfect planet, Gielinor, they built a large mountain around the Elder Kiln and returned to the Kiln, awaiting further instruction of their masters. Some TokHaar began to dig tunnels in the mountain around the Kiln, creating cities and mazes, and these TokHaar became the race we know as the TzHaar. The TokHaar that remained inside the Kiln did not like this, but didn’t do anything to stop it; they saw no point in killing their own kin.

Unlike the TokHaar, the TzHaar resemble something like a civilization. It seems separating from the TokHaar and not returning to the sacred lava caused the TzHaar to develop some sense of individuality. The four different incarnations of TokHaar became four castes of TzHaar: the strength of the Ket allowed them to become a police force for the TzHaar. The Xil used their agility to become hunters, providing the TzHaar with their source of sustenance (large mammals and rodents tunneling through the mountain). The Mej are mystics and were tasked with governing the TzHaar city. The Hur honed their crafting abilities to become the TzHaar’s craftsmen and smiths.

Normally, when a TokHaar dies, its body would be returned to the sacred lava and it would be reborn. When a TzHaar dies, its body obviously cannot be returned to the Kiln; instead, the obsidian just hardens and its soul is trapped inside the hardened obsidian. These hardened bodies are either maintained as statues inside the city, or broken into tiny pieces that the TzHaar use as currency named TokKul.

The TokHaar that remained inside the Kiln, I suppose as a way to pass the time until the Elders called upon them again, fought each other and improved their combat skills. During the quests in TzHaar city, The Elder Kiln and The Brink of Extinction, the TokHaar are responsible for the cooling down of the Karamja volcano in an attempt to get the TzHaar to return to the Kiln. The World Guardian discovers the TokHaar and stops their plans essentially by beating them in combat. However, we aren’t the first person to come across the TokHaar and face them in combat. 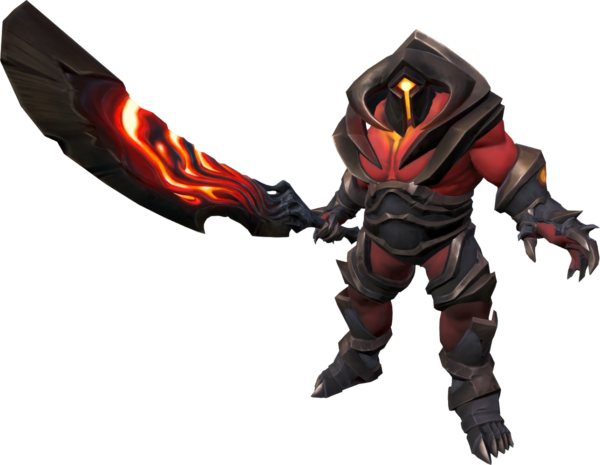 Zuk was a human warrior who was born during the Second Age. He was thrown inside the Senntisten Colosseum after the Zarosian Empire defeated his tribe and conquered his lands. Eventually, he won his freedom back after defeating Torva in combat. In search of more fights and thrill, he eventually came across the TokHaar and became the first outsider to beat them in combat. As his prize, Zuk claimed the Elder Kiln and was granted the title of TzKal: Champion of the Fire.

Exposure to the Elder Kiln caused Zuk to gain enormous amounts of powers, causing him to ascend to demigod-hood. During the God Wars, despite the TokHaar’s reluctance to participate, Zuk rallied some lava creatures and emerged from the Feldip Hills to join in on the fighting. Armadyl and Saradomin immediately sensed his presence and, out of fear that Zamorak would seek out Zuk and propose an alliance with him, got Bandos to deal with him immediately. Zuk was more than happy about this, seeing as this gave him the chance to test out his newly gained combat prowess against the Big High War God himself. Unfortunately, Bandos came out on top. After defeating Zuk, Bandos chained him to the Elder Kiln so that the world wouldn’t have to deal with him again. 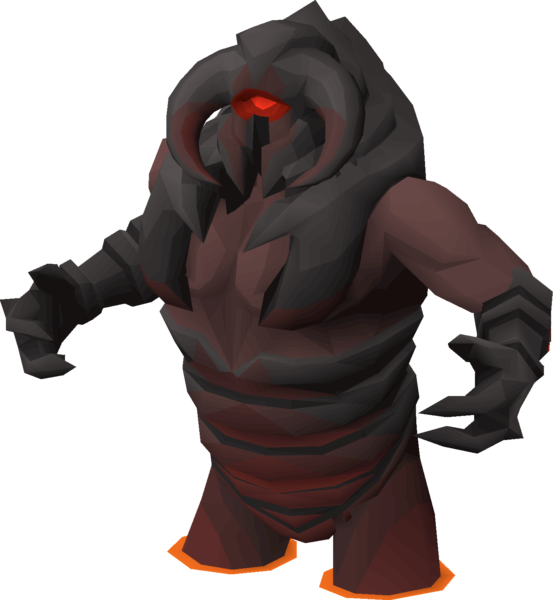 As many of you probably know, TzKal-Zuk is not a character originally from RuneScape; instead, his first appearance was in the Inferno on Old School RuneScape (OSRS). His story there is slightly different. The TzHaar in OSRS learned that incubating their eggs deeper and deeper into their lava birthing pool caused the TzHaar to be born with more memories of their ancestors. As such, they attempted to incubate their eggs deeper and deeper into the birthing pool, where they eventually stumbled upon an ancient incubation chamber that doubled as Zuk’s prison. As it turned out, however, incubating their eggs inside this ancient chamber caused the newly born TzHaar to become extremely feral and aggressive, and the TzHaar recruited adventurers to fight the feral TzHaar in order to drive back their numbers. During the final wave of the Inferno, Zuk breaks free from an ancestral glyph inside the incubation chamber. As far as I know, it’s never been exactly stated why TzKal-Zuk is imprisoned behind the Ancestral Glyph; all we know is that the RuneScape lore is intended to be sort-of canon with the Old School lore.

Finally, and we’re in RS3 again, when Ful was in need of an army to reclaim the Elder Eggs from the Senntisten cathedral, she turned to the TokHaar and reforged them into actual soldiers called the TzekHaar. TzKal-Zuk became her champion. However, Zuk does not particularly care for Ful’s will, but he chooses to participate in this war for pretty much the same reason he participated in the first God Wars: he’s looking for a good fight, and the most important battleground in all of Gielinor’s history is sure to provide it.

That’s it for this installment of Forgotten Lore! We hope to see you next month for the fifteenth edition. Until then, we wish you the best of luck in defeating Zuk!

posted by Alex 43 on 16th April 2013, at 1:43am | Discuss Article
Appropriately enough, for my April article, I’m going to talk a little about easter eggs. No, not those colourful chocolate goodies produced from a chicken/rabbit hybrid which I would imagine might taste pretty strange. I mean little hidden extras in games and movies that a devoted audience keeps an eye out for. I want to […]

Alex’s Analysis – That All You Got, Grandmaster?

posted by Alex 43 on 16th December 2012, at 3:41pm | Discuss Article
(I’m going to warn you right now that I include some quest spoilers in this article. You have been warned.) I’m going to start of in a manner that I’ve been led to believe will make the rest of this article far more interesting: The new TzHaar Grandmaster Quest sucks! Now that I have your […]

posted by Alex 43 on 22nd February 2012, at 11:44pm | Discuss Article
It started with the transformation of Ghost Town into what we know as Edgeville. A dynamic transformation of an area that we once knew to the point where we’ve got no idea where anything is anymore. But in Ghost Town’s case, there was simply nothing there but a few fight-able creatures like ghosts (doi?). Now […]

posted by Tim on 31st August 2009, at 11:35pm | No Comments
Just to inform you. My last article, Tricks of the Trade: Mobilising Armies Part 1, was done before the Mobilising Armies update so my last article is slightly out of date, but the information in it is still valid and can be used. I would also like to add that unfortunately, Hoard and Rescue are […]