Forgiveness of a Chaos Dwarf can be started by speaking to Commander Veldaban in Keldagrim and needs these stats to start:
• 61 Hunter
• 61 Firemaking
• 69 Strength
• You must be able to defeat a level 100 enemy

You also need to have the follow quests done in order to start the quest:
• Forgettable Tale of a Drunken Dwarf
• Between a Rock…

•This is the very first quest where you see a NPC run.

•This quest uses the word “ass.” Other quests have had words like that in them, but have later been removed, as this word isn’t censored anymore, it might stay in the quest.

•This is the third quest in the “Rise of the Red Axe” quest series, the first quest was “The Giant Dwarf”, second was “Forgettable Tale of a Drunken Dwarf” and now this one makes the third quest.

•Mod John A said that the Dwarves were going to get a graphical update, unfortunately, this update didn’t see the release of them, and so we will need to wait a little longer to see them be updated to fit the HD look.

•The Trapdoor northwest of the Grand Exchange has finally been opened and you will find out about it in the new quest.

The third quest in the “Rise of the Red Axe” series, the first quest done Mod John A, and a personal favourite of mine. Forgiveness of a Chaos Dwarf is the new quest released by Jagex. It all starts when Commander Veldaban gets a call that… THE CHAOS DWARVES ARE ATTACKING!!! 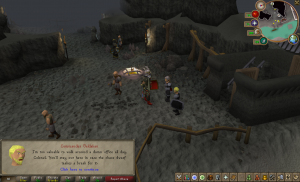 With a couple of swear word here and there the quest goes into the working of the Chaos Dwarves, and the Forgiveness is found out. Commander Veldaban and you go against what you are not suppose to go against to discover how and what Chaos Dwarves become. Little tracks in the dirt can go a long way to discovering the truth and the possible end. New areas help you to the truth with new puzzles around every corner. The Chaos Dwarves with their new weapons dealing some hard damage if the proper prayer isn’t activated. Who caused all of this, none other than the head of the Red Axes, and by his side, an old friend of Veldaban who has a grudge to settle. 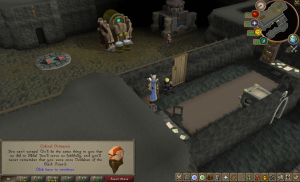 Now for all of you who have Quest Related problems, I went head and did the quest to show you’re the Reward scroll. 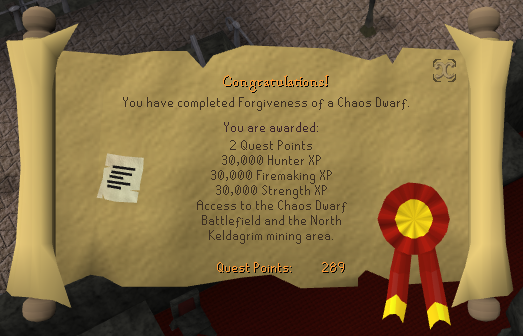 Now while Jagex has some swearing issues (I guess they don’t really like Chaos Dwarves). They do show how bad Beer is for someone, even if the after effects could cost someone their job. I really like this quest, it’s one of the great storylines I look forward for a new quest coming out in. Awesome job Jagex, Congrats on the great Quest, and your first quest Mod John A and that’s all I have to say, so for this quest review, Tim is out!

posted by Kirby on 5th June 2009, at 4:26pm | 2 Comments
Jagex’s Blabbings Larry the zookeeper has made the mistake of going on vacation, and now he’s in a bit of a pickle…well, more like a straitjacket than a pickle! Apparently, he spotted a giant penguin near Witchaven, and now he suspects that the other penguins may be up to something. The problem is that his […]