The bigger update of the two, quick chat is an option that allows you to say something by hitting hotkeys, therefore making it easier and simpler to communicate.  This is especially useful in mini-games where typing may take up too much time.  To activate quick chat, simply click the little speech bubble next to your name in the chat box or hit various F keys.  F9 opens the main quick chat box.  F10 opens the quick chat box that will vary based on the circumstances you’re around in Runescape.  F11 will repeat the last thing you said using quick chat.  The big change from this update comes from the fact that muted players are now also allowed to use quick chat to communicate.

A very minor change, new level up messages will now display whenever you gain a level in Runescape.  The first message that displays in your chat box is still the same, except that it tells you to open your stats menu to see more info.  If you go to your stats menu, you will see the icon of the skill you gained a level in flashing.  Click on the icon and a popup will appear showing you a list of what you can do at the level – guilds you can get in, items you can now use, etc. 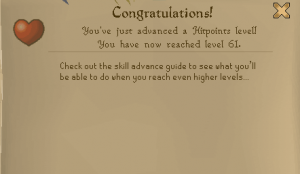 I believe that Quick Chat will definitely become useful to people.  I myself have browsed through it a bit and memorized some handy key sequences to use for responses I say often.  However, to some people typing out the message is faster than figuring out the hotkeys for it, so it has its limits.  As for people being muted being able to use it, I think this is a good idea.  To lose your communication in Runescape is a sore blow, especially if you didn’t deserve it (and Jagex certainly does deal out mutes to people who did little-nothing wrong).  It’s also still just a limited amount you can say, so in a certain viewpoint you are still technically muted.

The new level up messages were a waste of time in my opinion.  It is pretty much just to make the game easier for really new people who don’t know that clicking the stat icon will make a page appear saying everything that the new level up messages say.  I also don’t like the fact that you have to go to your stats menu to access the popup that says everything you can do.  If the popup appeared automatically after you got the level, that would make this update better.

Overall I think these updates are lacking a little.  The ideas are good but Jagex didn’t do enough with the idea to make a potentially good update.