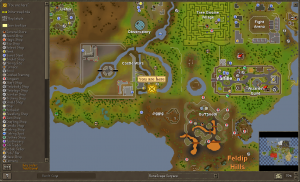 posted by Tim on 27th April 2009, at 3:01pm | 2 Comments
Now, before I start, I would like to thank Owen1892 for his help in the making of this guide. With the resent Event line up update on the forums, I decided that maybe I should make a guide for one of the new events in the line up. So I chose PEST CONTROL. It’s quite […]

posted by Tim on 30th March 2009, at 7:13pm | 9 Comments
“Congratulations! You have achieved 99 Defence!” Now, what could be better then to know how this happened? Well, in the desert, south of the Bedabin camp, are the bandits that trust one god, and only one god, no other and if you wear some piece of armour of a god then their will freak out […]