Happy Boxing Day, ladies and gentleman. The year has come and passed in a quickly manner. Nevertheless, Jagex has done quite a few things with RuneScape during this time. However, I won’t be going on about the major updates this year. Instead, I would like to talk about the review from my “A Translation of the BTS ‘09” article. If you haven’t read it, then please do even though it was translating something that has been just at the start of this year.

Doing the ‘little’ jobs that make a big difference (e.g. a ‘You are here’ arrow on the world map) and basically fixing all the annoying little quirks the game has. Things that may be the least glamorous to work on and talk about, but which really add up.

I was very impressed with Jagex on this section of their promise. Of course they couldn’t fix every bug in the whole game, but it was definitely an improvement, or at least they actually told us what they were fixing since they didn’t previously. Nevertheless, I think the objective and note interface was a little too much. Meanwhile, the random events update was a relief to many weary victims of them. While they are still in the game, it isn’t as bad as it used to be.

Do you remember the million lines of “You are already under attack!” when you were last fighting those dragons? Well, this is just another one of those little things that make RuneScape so much better. There are many of these things such as the run energy update and display names, which all need a round of applause.

Updating some of the earliest content/quests to bring it up to date, and take advantage of all the features we have added to the game engine since it was originally created. Also, reworking old clues that no longer work now the game is bigger (e.g. ‘Look west of the mountains’ was fine when there was only one mountain, but not now).

Most of the goals Jagex made actually did get met. However, this one was one of those that got cut off the branch unfortunately. Some skills such as agility and hunting were added to partially, but nothing like huge content. I could be wrong, but I don’t believe there were huge jumps in quest changes. However, as for the game engine there are some interesting new features such as the map and something that will be coming out soon called particles.

Making the interfaces as intuitive, flexible and user-friendly as possible.

In my twin article, I stated that the interfaces would not be as flexible as I would desire them. In this case, I was slightly wrong. While I am shocked that Jagex exceeded my expectations on this matter, it wasn’t exactly what I wanted. The prayer and summoning interfaces were wonderful additions. So was the price checker. However, I barely use any of them enough to be more than a small little icon in the complementary interface section.

Then, after all that, we’ll start looking into abandoned and barely used areas/features of the game, and breathing new life into them.

Many achievement diaries were added and new ideas were given for the diaries this year. This makes it so that the areas that are rarely used have been “breathed” on since the rewards for a daily pickup or a cheaper selection of items. Yet, there was very little hot air breathed on other than those areas.

Overall, the year’s promise and goal was pretty well made. There were some things such as updating earlier content that they couldn’t get within star date 109000.0 to star date 109.365.9, but I think they did quite a bit better than I expected them to. Congratulations, Jagex. I’m looking forward to the next year of awesomeness. Merry Christmas, and happy New Year! 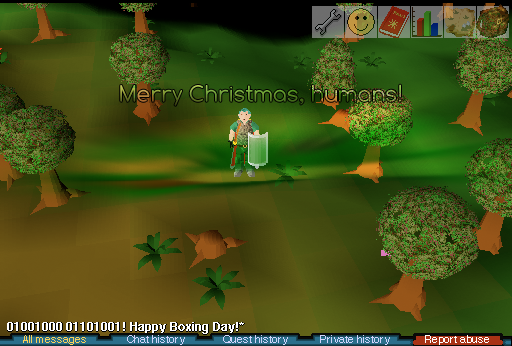 A Translation of the BTS ‘09

posted by Kirby on 2nd February 2009, at 8:52pm | 1 Comment
The year of 2008 has come and passed. Now we are lifted up to 2009 with an entire new spice of RuneScape’s updates. When I first came to reading Jagex Moderator Vince’s behind the scenes news post of what is to come of 2009, I was anxious for each and every one of these updates. […]