Alex’s Analysis – Once Upon a Slime

So I was browsing through the Runescape site, doing my Monday morning rounds, and then I saw that Runescape had just released a new quest, and I was all: 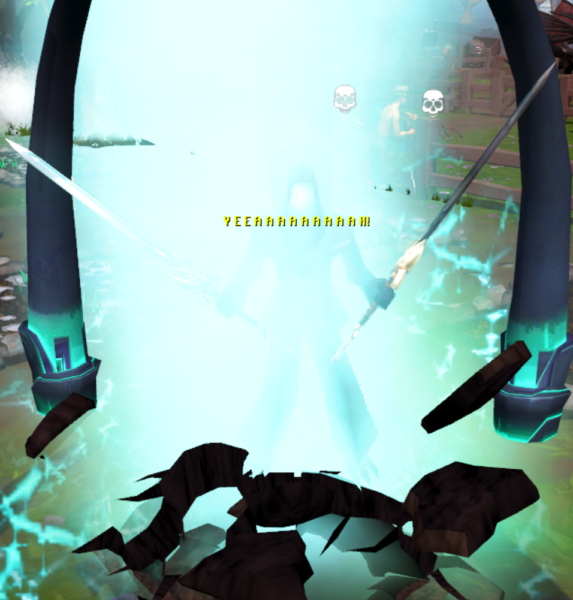 And then I saw Peter in Rimmington and I was all: 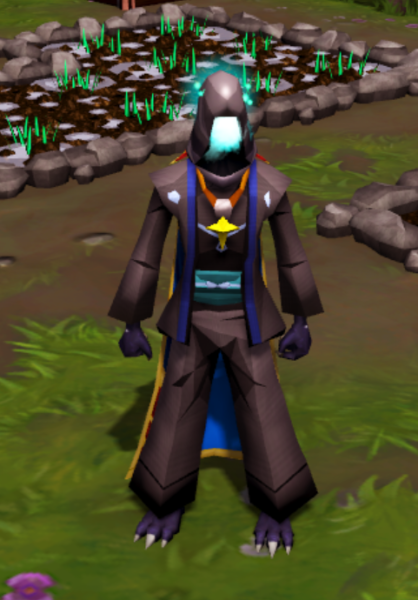 … but a quest is a quest because it’s a quest, and I like doing quests even if they’re quests, so let’s quest!

I teleported on over to Rimmington to invoke on what I was anticipating was going to be an epic continuation of the random, sort of semi-world event that had happened once before that caused the townfolk nightmares of unspeakable proportions.

… and I was mostly right. It was the continuation. All our favorite characters were there and everything! 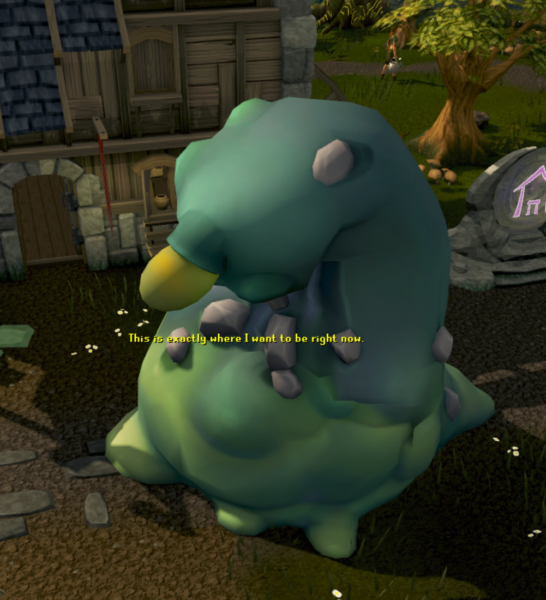 So it starts with us chatting with our good friend Peter. For those who were there during that quick world event, Peter is the sole creator and the one who was entirely to blame for every Miscellanian nightmare this side of the River Lum. And we get to help him once more by resolving this threat of man-consuming and eardrum tainting once and for all.

Bcfore you continue, I will mention now that there are spoilers for this quest. If you want the full experience, do the quest at your earliest convenience because I don’t believe there are any skill requirements at all. Trust me, you’ll want to go in blind. Zamorak does die at the end, and it’s very tragic when you don’t expect it.

… or maybe that was just for my play-through… anyways, moving along…

So Peter went and cloned the giant slime and somehow assigned them genders, and now he’s hoping that we can find a way to make them fall in love with one another. Doing that will inadvertently make them leave Rimmington forever and become someone else’s problem. Trust me, your character knows this is a terrible idea.

So, to make him look the part of a strapping gentleman, we go have a chat with Thesselia and get a top hat, the Varrock Clothes Shop Owner. I personally was pleasantly surprised at this; it’s been ages since I’ve seen her. She’s been around since Runescape Classic. She’s aged pretty well. 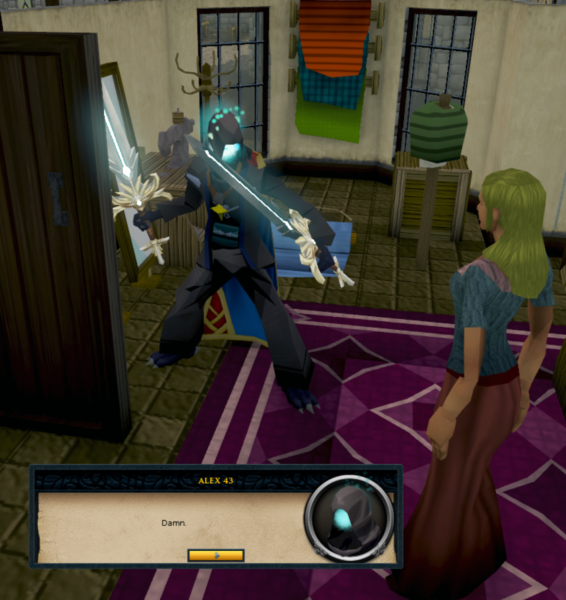 (Yes, your character does say that. I didn’t doctor this photo in the slightest.)

By some freak coincidence, she owns the second-largest top hat in Gielinor. Perfect, except it’s not; Peter wants a regular sized top hat. Alright, then.

About 20 hard treasure trails later, I discovered that Eva, our friend during the construction of the Anachronia ships, invented a shrinking machine that will shrink our hat for us! So, several million coins richer, I headed on over to experiment with this machine. What could possibly go wrong? 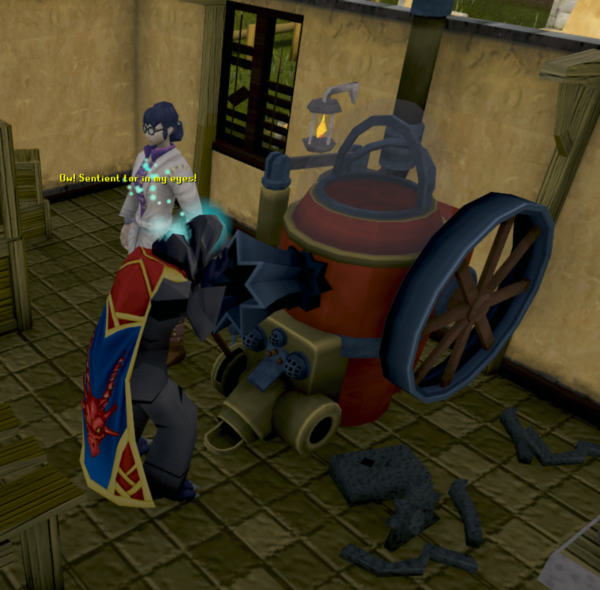 … I smashed the machine with an earth wave, shoved Eva headfirst in Gielinor’s only toilet, and lucked out on a top hat from a treasure trail. I gave it to Peter. He gave it to the King Slime. Just, walked right up to the man-eating putrid mess of a slime and popped it right on top of its 3 story-tall head. Guy’s got talent, I’ll give him that.

But it wasn’t enough. Turns out the other slime is more attracted to a scent somewhere in Rimmington. By grabbing a piece off her, you can sort of pinpoint where it is by a pseudo hot/cold minigame. Spoiler alert, it’s Hetty’s potion. The slime wants some of the good stuff.

Grab a bucket and jack Hetty’s stew (also from the Runescape Classic era), and Peter will go ahead and splash it all over the King Slime because what else could possibly go wrong? 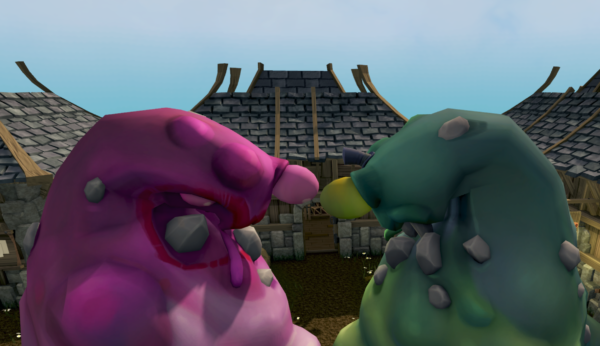 … too well. They fall in love, do things to each other out in public, and then wander off never to be seen again maybe.

… and that’s it. Quest Complete! We win the universe, and Peter gets a new hat! 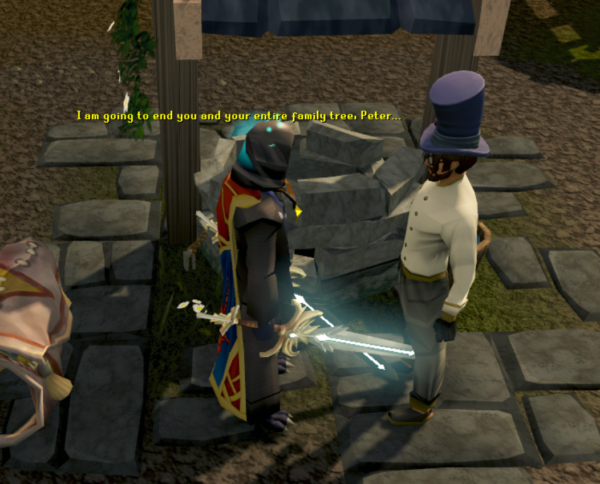 … yeah. That’s literally it. You think I’m making all this up? This is the journal for the quest; try presenting this one to a friend without any context: 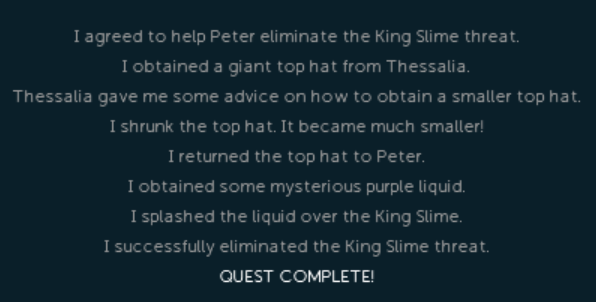 Doesn’t even mention Zamorak. It was a thing you had to be there for. Super tragic.

So, what do I think? Joking aside, I actually really enjoyed this quest. It was quick, it was simple, and it gave some much needed personality to a few older characters in Runescape. It doesn’t even look like it took much effort to make; it had a simple couple of puzzles, was mostly you going places and talking to people, and there were a couple really simple cutscenes.

And yet, it was a quest. A much needed, well deserving quest, full of humor and good times for all. These are the sorts of quests I really want to see a lot more of. Like a sort of guaranteed once a month quickie sort of quest. Or even, if they get a bunch of developers together to form a sort of “ninja quest team”, I’ll betcha they can make it a two-a-month thing! That would be epic, because quests are the things that really give the world life. It gives you things to do and discover, and sometimes can even hit you with a plot twist that you never saw coming. For example, who would’ve thought that Zamorak was actually a respectable fighter and leader among Mahjarrat rather than a straight-up bloodthirsty death god? Mind-blowing stuff.

And, you know, if there are no quests left to do, then there’s not really anything more to discover. The game sort of grows a little stagnant, becoming little more than a skill grind and money-making simulation of a game. I don’t like it when Runescape does that to me. I cherish the quests as the come. Even if they end like this one did.

Now, if you’ll excuse me, I’ve got a bit of therapy to attend. 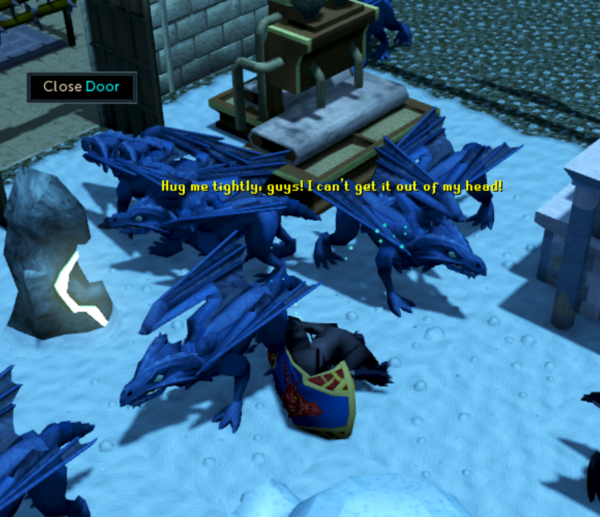 Until next time (I know, missed pun opportunity),