The Arc islands! A set of islands that were, until now, just a set of names and plots on your player-owned ports navigation chart. The first set of islands where those who obtain level 90 in select skills can start their career as a Portmaster. Comes with plenty of bamboo, chimes, and a whole assortment of trade opportunities with new cultures and tribes. All of which we don’t actually see because we hire and send out a bunch of noobs to do that all for us while we kill stuff for gains.

Until now. Now, we can actually board a boat that’s… well, different than the ones in your port, and has a different captain and crew, and… you know what? We built that thing ourselves. Pride and effort, y’all! We can board a boat we all built with our bare hands (that were holding hammers) and sail off into the Eastern Lands!

Like God Wars Dungeon 2, we get a huge hype buildup to a huge update! More than a month’s worth of prep, starting off with a missing persons mini-quest and building up to a raid on Port Sarim jail, until finally gathering a crew together and putting together time and resources to build a ship. All this leaving us with not just the opportunity to sail to the Arc-apeligo (get it?!), but with good, personal reason: to hunt down a Skulls slave trader that’s kidnapped a bunch of Gielinor prisoners and rescue them. Because slavery is a bad thing. We are heroes of justice, y’all! … oh, and maybe we’ll get Trader Stan’s ship back in the process. Maybe. But I’m going in with multicannons blazing, so it’s more than likely he’ll have to build his own replacement when I’m through with Jed. Or I suppose he can always hire adventurers with the promise of AFK experience and 350K exp in reward lamps.

Like many of the other larger updates, we’ve only just gotten a small taste of what’s to come, with more well on the way after we get accustomed to a routine with the new content. Prifddinas appeared in two parts, GWD2 got Telos added in, and the Arc will have the rest of its islands added eventually, potentially extending into the next region after a while. And the next. And the next. Lots of content and quest opportunity there.

What’s nice about the Eastern lands is that because it’s so fundamentally different than Gielinor in terms of lore and belief, these lands end up being a sort of blank slate for the storywriters at Jagex to play around with. Almost like creating an entirely different game altogether, but with the same controls. A mini-RuneScape 4, if you will. … actually, maybe not. Since it’s an extension to the game and all. Maybe… “RuneScape: The East”. Or EastScape. I dunno.

It’s very similar to the inverse RuneScape that was released as the 200th quest in Varrock. Whole new currency and you can’t bring items in between, effectively making it a means of starting RuneScape anew with a fundamentally different layout. Just think of the Eastern Lands as a much more high-level version of the alternate dimension RuneScape. And you can bring items back and forth.

Speaking of Gods, the Eastern Dragons look fantastic. No debate here, they’re just awesome. I mean, look at this! 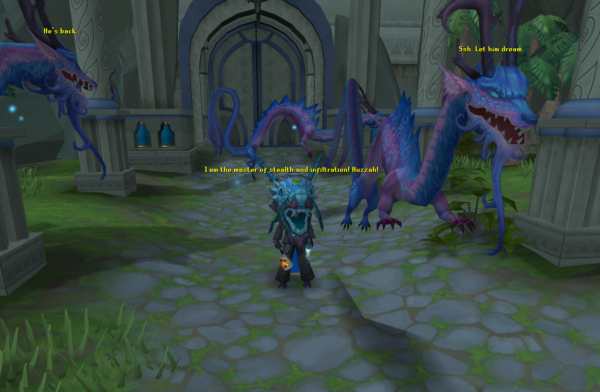 For goodness sakes, take a moment and immerse yourself in the high detailed graphics, sound effects, and music. If not for the gainz, please enjoy the place as being the work of art that it is.

So, besides great music and dragons alike, what do we get out of the Arc? Well, there’s some new training opportunities, new slayer monsters, and some quests. Ultimately, you’ll be getting the best spear in the game and maybe a spirit dragon pet, and… well, that’s pretty much it. Not that much with an update of this size and hype. In fact, there are some players who even have deemed it “dead content”.

But that’s fine. Really, it is. Y’all remember how Prifddinas was released? Started with the quest, then the first half of the city, and finally the rest of it? That’s what we’re looking at here. The Arc, as it stands right now, is just the first bit of the Eastern Lands update. There will be much more content to come, along with more quests, more skill spots, and more rewards. It’s just that right now, you’re able to get yourself prepared for these upcoming updates by stocking up on chimes, resources, and the ideal island.

Sure, there’s not much to do yet, but the Eastern Lands are not meant to be an entirely new RuneScape game where you leave the old RuneScape behind and begin your RuneScape career anew. You should still see Prifddinas as the high-level player HUB, do the Mahjarrat quests, and strive to get that Completionist Cape.

At least, until the next bunch of updates come out. Then… we’ll see.