**This article contains spoilers from Hero’s Welcome and broad spoilers about every quest from the last 2 years.**

Last week, we saw the release of a shiny brand new quest. Hero’s Welcome was hyped up as an epic adventure following the return of V, a hero turned god, and promised Fremennik fun. However, this quest left much to be desired. What initially was advertised asFremennik-focused turned into a dragonkin extravaganza. If this were the only issue with this quest, I’d be relatively content, but the problems don’t stop there.

For one, we never truly learn why V is any different from us in his contact with the stone. Yeah, yeah, they’ll say we are just “stone-touchers” and that he was a “false user” because he sought to use the power of the Stone as opposed to gaining knowledge from it, but that sure feels like a cop-out to me. When my player character touches the Stone in While Guthix Sleeps, I don’t think he really knew what he was doing. How could V have known any more than us? This area of the lore feels gray and undefined, and it rubs me the wrong way that we’re expanding on that area of lore without even attempting to clear things up. Several other gaping holes can be found within this quest, most having   been discussed in depth in the last podcast, so I’ll avoid beating that dead horse. The problems range from inconsistency in how much the dragonkin see us as a threat to strangely accurate teleports performed by a god who, allegedly, has malfunctioning powers. Despite being an enjoyable quest to play through, it left me with a bad taste in my mouth, and the question of why this quest had to be done this way. 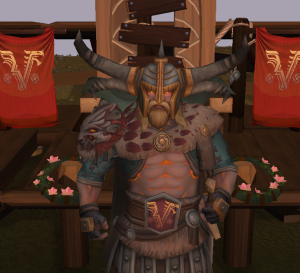 The answer, I believe, is that quest developers for Runescape have gotten ahead of themselves with ambition. They’ve begun to put the metaphorical cart before the horses, if you will. By this I mean that quests have gotten so big, so grand, so game-altering that the developers of small quests feel as though they need to live up to the high bar of quests like Dimension of Disaster, Fate of the Gods, or even The World Wakes. It seems like even small quests have to have something in it that is “big”. Hero’s Welcome, for example, could have been sold as another small dragonkin quest with expansions on existing lore. Instead, they included the coming of a new deity, one that had been name-dropped several times before without much additional information. Looking back on the quest, it feels like V’s arrival and quick death was all for the purpose of shoving new dragonkin lore in our faces. My opinion is that the impact of the quest could easily have been achieved without throwing away such an intriguing new character. 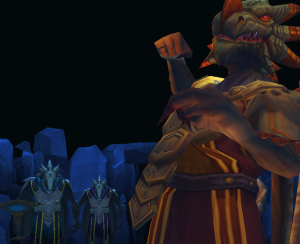 Going back over the last two years of quests is just as telling. Dimension of Disaster was the 200th quest, so that can be excused for how epic and hyped it was. Dishonour Among Thieves was another quest wherein we influenced the power of at least one god, and played a vital role in a heist for the Stone.

Heart of Stone saw new lore for the elder gods, the most powerful beings known. Broken Home was hyped as a thriller, and a unique new take on how to do quests as well as the first to be replayable. Plague’s End finished a 10-year quest series, The Mighty Fall saw the possible death of our long-time friend, Zanik, Fate of the Gods saw Zaros return, and Missing, Presumed Death brought Sliske into his present role of master puppeteer. One of a Kind dealt with dragonkin, white dragons, and more. Birthright of the Dwarves was the end of the Red Axe series, and The Death of Chivalry dealt with Saradomin and his previous actions. Humblest of all these was the infamous Bringing Home the Bacon and the simple A Shadow Over Ashdale. Of the 14 quests in the last 24 months, 7 dealt with gods or elder gods, 2 with dragonkin, and 4 with mahjarrat.

The reason I bring up all these quests is to make a point that we’ve reached a point, now, where the majority of quests deal directly or indirectly with extremely powerful beings (often deities), and offer big lore revelations no matter the size or difficulty of the quest. It feels like, because players have enjoyed large-scale quests, developers feel like small-scale quests are less glorious, somehow. If a quest like Hazeel Cult, Ratcatchers, Olaf’s Quest, or even Catapult Construction were to come out today, it would feel out of place. The scale just doesn’t fit right with what we’ve grown accustomed to. Long gone are the days of One Small Favour and quests similar in nature where dialogue is where most of the content lies. Now we get new areas just for a quest, big, fancy cutscenes, and complex boss battles.

Now trust me, there’s nothing wrong with these sorts of quests. Some of my very favorites are those that are large in scale, but the reason so many of us loved those quests is because they were different. They stood out. What happens when we’re used to big, grand, and earth-shaking? The overuse of storylines like gods, dragonkin, and mahjarrat can lead to a desensitizing of the players to the point where small, simple quests no longer slake their collective “thirst”.

Thankfully, I don’t think we’ve reached that point yet, but it needs to be addressed. When every quest is “big” (even the ones that really aren’t), none of them are, and many will fall short of our expectations. So yes, I’m asking that Jagex lower their bar. Pump out simple, silly, baseline stuff to get us through the two months of questlessness that always seems to follow a release. Your players will thank you and, in the long run, the developers of big quests will too.