No Man’s Sky set for release on June 21

That’s right the long wait is almost over “No Man’s Sky” is set for release on June 21st and I for one can’t wait. I wanted to take this opportunity to talk about the game given the fact of many of our readers are Sci-fi fans. I’m sure most of you have heard something about this much anticipated game already but just in case you’ve locked yourself in a bunker awaiting the result of the 2016 presidential race, allow me to explain what “No Man’s Sky” is and why its so hyped.

No Man’s Sky is a new space game. Its being developed by Hello Games, a very small game developer responsible for creating Joe Danger. Hello Games literally has ten people working there. What it lacks in size Hello Games has made up for in pure talent. Its Founder Sean Murray left Cinterion Games, where he helped develop Burnout 3, to start this little company on a wing and a prayer. His small team then went to work on Joe Danger, a fun little game reminiscent of the days of excite bike and he hoped that this would generate the capital he needed to begin work on his true ambition, No Man’s Sky. The plan worked and soon after he was able to peel three people off of the main team and sequester them along with himself in a little room where No Man’s Sky would begin to take shape. As it turned out Sean Murray is a mathematical genius and what he had planned had never been done on a grand scale. Of course I’m talking about procedural generation to develop a game. 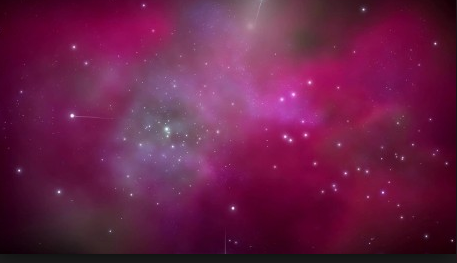 Procedural generation is the cornerstone of No Man’s Sky and we can’t talk about the game without talking about procedural generation. Essentially procedural generation is a series of algorithms that tell the computer what to generate. The algorithms take into account certain parameters that the team have set. For example planets that are far away from stars will have certain characteristics that closer planets will not. That means while there are elements that are randomized, on a whole there are variables and characteristics that are not purely random – there are laws so to speak that govern the universe. The team has created a number of assets like parts that can be interchanged. Everything from ships to animals to plants and planets. All of these assets can be utilized as the algorithms do there work. Everything from the ships to planets and even the music are procedurally generated. What this means for No Man’s Sky is that it can be a awe inspiring massive game. How big you might ask, well real big. 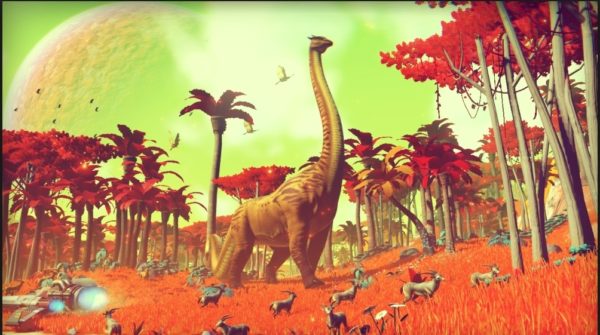 Its hard to wrap your head around the sheer size of No Man’s Sky. Sean Murray has said there are eighteen quin-trillion planets and no that’s not a made up number. In other words if every person that buys No Man’s Sky was to visit one planet per second our own sun will burn out before all the planets are discovered. No Man’s Sky is a universe with countless galaxies, star systems, solar systems and even factions of other intelligent life. On top of all that, the planets are actually planet sized. That means if you were to land on a planet and get out of your ship and start walking in one direction it could literally take you months to go around the whole planet. The possibilities are endless and takes the concept of an open world game and stretches it beyond what anybody thought possible. There is a kind of somber wonderment in the fact that no matter how much you play you will die of old age before you have have discovered even a fraction of what is in No Man’s Sky. 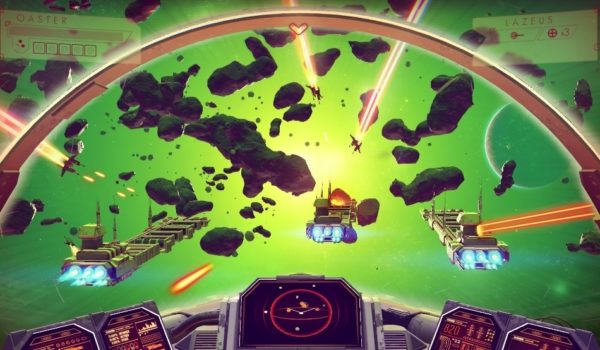 No one will have the same experience in No Man’s Sky. The scale of the game is one thing but how you choose to play it is entirely up to you. There is a central goal in the game of reaching the center of the galaxy. What we will find there only Hello Games knows, but Sean Murray has said it will be epic. Given the fact that the world of No Man’s Sky is a universe and not merely a galaxy I think whatever we find will just be the beginning. There are many ways to play the game while trying to reach the center. You can be a pirate praying on trade ships as they travel through space or you could be an explorer discovering planets and new life forms all while naming and categorizing them. That’s right if you discover a new planet, ship, species you can name it and that will be its name forever. Another possible way to play is to be a fighter helping certain factions and raining fiery death on your opponents. Its all completely up to you. Ships, suits, and multi-tools can be upgraded according to your play style as well giving you complete control over how you wish to play the game. 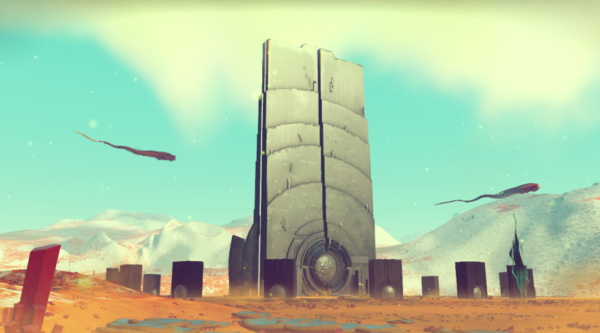 Much of No Man’s Sky is a mystery. Hello Games has been very tight lipped about the game and the only things to come out are what they feel we need to know. If you follow gaming news it seems like we know a lot about the game already but I assure you they have only scratched the surface of what is actually there. There are still open questions about the game like will this really work? I don’t mean that in the sense of will the game run but rather will it really be as entertaining as we hope or will the procedural generation be just slight changes that end up feeling boring. Will the payoff upon reaching the center really be what we hope. What will it feel like knowing that there are other players playing but you’ll never actually run into one given the size and scope of the game? Maybe most importantly can it live up to the hype and can it really deliver? The simple answer is we don’t know until its release. One thing is for sure though, if it manages to be as great as we hope it could change the way games are developed in the future. 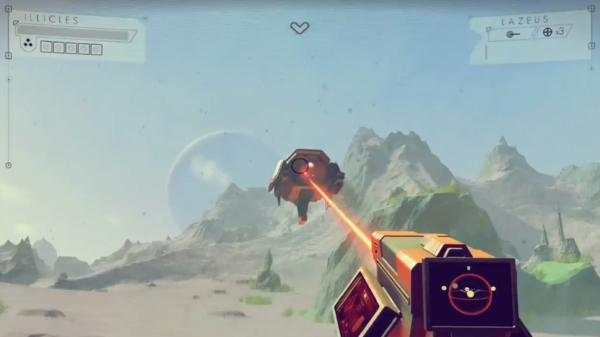 No Man’s Sky is available for pre-order now on Steam and Game Stop for the PS4 version. I could go on talking about this game for hours but I think I’ve covered the basics. If you want to learn more about it or hear some good conversations about the game check out Cobra TV, IGN News, and ExploreNMS.com. I’m looking forward to finally playing this game in June. Drop me a line if you are planning on buying this game. I’d love to hear how other people are going to play. I plan on being an explorer seeking out new planets and new lifeforms and trying to learn the different languages of the factions in the game. Next month I head back to Gielinor. Until next time, Happy RuneScaping.