Several family members and friends think I am very pessimistic. However, maybe they just don’t realize that I like to be realistic about things. Whichever the case may be, I just like to think of things that are most probable to happen. So this month will be a discussion on realism. Yay?

Starting with walking – it is severely shortened down. For medieval times, wouldn’t things be spaced out a lot more than we do now? The buildings are very close together as well as the cities. In those times, a horse could probably get from one city to the next in about three or four days depending on the distance. Yet in the game, it only takes a couple of minutes! Now I realize that all things do need to be shortened for convenience, but does it require that almost every square account for approximately 100 square meters?

The Classic version had it right with stamina. Although it very can be annoying, do we as humans really believe that we can run around, attack monsters, and practice magics all in a day’s worth? I highly doubt it. In fact, only aliens such as I could accomplish the feat of running for long periods of time or create enough energy to teleport all day long. Now what’s the thing you call energy in the top right of your screen? Oh by the heavens of Finnigan, mine practically regenerates at a godly rate. So besides run energy, where is our endurance? The world may never know. (It does, in fact, take over nine thousand licks to get to the center of a tootsie pop, but only if you have a very small tongue.)

“Charlie, that really hurt!” are the words that you hear if your knife’s name is Charlie, and you are attempting to fletch a bow as fast as they do in RuneScape. Trust me, my brother has tried this at home and it was an utter failure on his part. So kids, don’t try this at home. Leaving fletching by itself in a dark corner, construction is the same way. Have you ever noticed that you can build a table in seconds while in reality it takes at least several hours? Sometimes I feel that we could use a little time delay for each type of furniture. For example, a table would have a delay of 9 seconds, and a chair would have a delay of 5 seconds.

Whatever happened to the American crisis of fast foods? Where when we eat, we get fat. When we go on a diet for a few months, we get fat after that. Yet, while we can sit on our marble throne 24/7 in RuneScape and still be the skinny little sticks that we are. Oh, not to mention having a cake every few minutes while battling a terse hobgoblin. We do have a random event, which actually forces us to get into shape with a few sit-ups, push-ups, and a jumping jack here and there. So I guess that should fix up the 28 sharks we eat up for the fight against dust devils. I can already feel the heat in my legs. 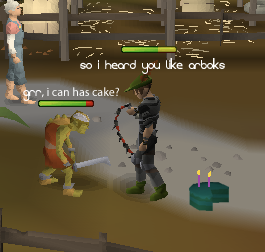 Cannons are the life of the party in ranging. Crossbows are the modern way of doing things, but cannons are absolutely magnificent creatures. Yet, after a little bit of digging in history, I don’t recall anything of a mechanical turning cannon anywhere! I guess we have the dwarfs to thank for that. That must mean they have higher technology than humans do. In that case, I must make a prophecy.

Prophecy: Falador shall fall by the hands of the Zamorak disciples, as they tremble away through the bricks made of marble. As Rakminlad claims the kingdom, the Red Axe shall swipe the chair out from under them, and assassinate Rakminlad with laser guns. They shalt rule for twelve days and twelve nights. On the morning, the Bits and Bytes Rebels shall conquer with extreme prejudice.

Okay, enough of that nonsense. The only way that we have cannons like that is we met up with some science fiction character along the way.

Farming is the odd one out. It actually involves one thing that normally isn’t taken into account: time. While it takes my trees years to grow those confounded pears, a game obviously shouldn’t take years into account. Yet it still has a timely manner of several hours or a couple depending on what the crop is. Oh, don’t forget the marvelous thing about gardening. The weeds just grow and grow until they get extremely out of hand! Don’t you love weeding your garden after a week off from vacation? Well actually it is a pain in the abdomen. I suppose I should actually try a rake and see how far it gets me.

I could probably talk all day about things in RuneScape, but I won’t bore you to sleep with my antics. Now if we want to get real, I think we need some virtual reality helmets and put ourselves into the game. Now that would be fun! If only we had that in today’s society. Well, this is where I part off into the wilderness. Oh, and I would have to agree that I am pessimistic after writing this article. Oh well, I can still use the excuse. Merry meet.