“Congratulations! You have achieved 99 Defence!” Now, what could be better then to know how this happened? Well, in the desert, south of the Bedabin camp, are the bandits that trust one god, and only one god, no other and if you wear some piece of armour of a god then their will freak out and try to remove you, any way possible. Now, while some bandits won’t attack you, all the other will, and the only way out is to kill them or RUN AWAY! So, as you read along you will learn the way of the Bandit camp bandits and find the true, extremely fast way to get to a 99 combat skill.

and “Time to die, Saradomin filth”

are what the Bandits are going to yell as they start to attack you. They don’t want you there would most likely be your first impression. Even if they scare you that is no reason to leave. They are very simple to kill if you have the right equipment. All you basically need is either one Saradomin item or one Zamorak item. 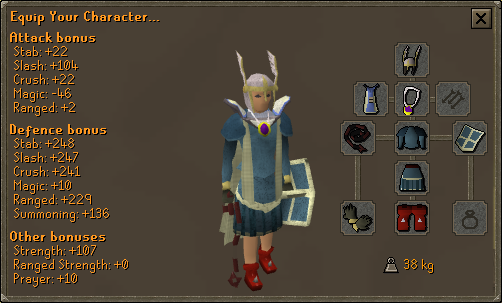 Now, in my outfit I have two Saradomin items but you only need one item. You can set your look up however you want it. When I got 99 Defence I only had a Saradomin Plateskirt and since it has the same stats as the platelegs and is cheaper, it is worth it. I have seen a lot of people use a kiteshield and that is also up to you. Just keep this in mind. Only bring what you want to lose if you were to die. It is a multi-combat area and as long as you have a god item equipped, they will always attack you, and will only stop once you take your god item off. I highly recommend a Ring of Life when you go because when you get down to low health then you will be teleported away without dieing and losing a lot of money. Now, your inventory will tend to look something like this if you plan on staying there for a day or two (or three to four weeks) and you’re using food there. 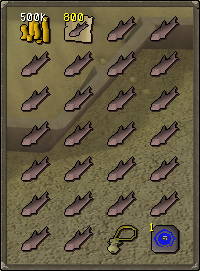 The point of the noted fish is that you sell it to the General store and buy it back. It is one of the easiest ways to stay there (other than using Guthans to get your hp back). It doesn’t matter what kind of food you use. However, sharks are very expensive and should only be used if you have A LOT of money, same goes with Monkfish. Salmon and Tuna are going to be your best choices because they both heal around 10 per bite and aren’t that expensive in the G.E. or at the general store in the Bandit Camp. Now, enough about the set-up, how do you get there? Well, there are 3 good routes to get there. 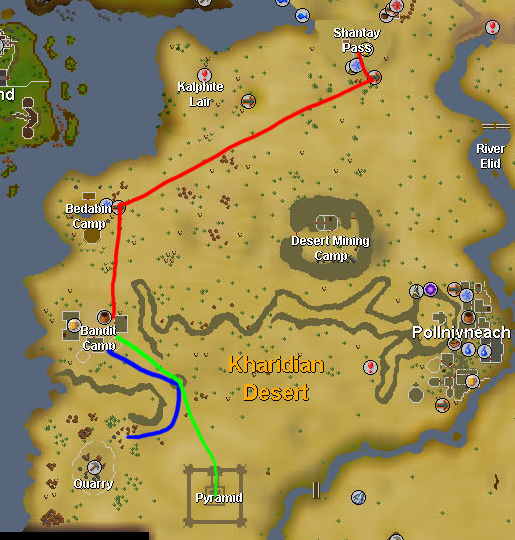 The Red route is probably the easiest route. All you need is 205 gp (105 gp if you have a ring of charos (a)) and a free spot in your inventory to get to the Bandit Camp. This is a good way if you only bring one god item and you don’t want to be attacked you can put the god armour in your inventory and switch world, not being attacked by the Bandits as you switch worlds. Now the Blue route is the route that I always take to get there. All you need is a Camulet and that’s all. Rub your Camulet and you will be teleported into the Enakra’s Lament quest temple. Run through the temple to the bottom floor and go out side. Unless you want to lose some health, run to the spot northeast of where you come out of the desert, the spot with the mirrors, and wait there for a while, that is a spot where you won’t feel the deserts heat. After you are rested, run northwest and you are at the Bandit camp. This is one of the fastest ways there but you can’t get take off some armour when you’re switching so switch in the general store because the Bandits can only get in there if you are lined up with the entrance of the store. The Green route is not one that is suggested. You need to have a pharaoh’s sceptre for that route. You get to where you start on the map by teleporting to the Desert treasure pyramid. You then run to the mirrors and then up to the Bandits. There are five spots you can kill at. One is a house east of the General store that has a ladder in it. 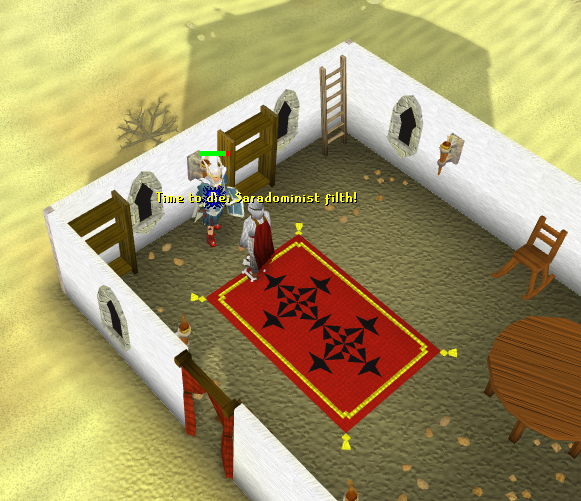 This house has two level 57 Bandits in it. This is for most people who don’t really now how to kill Desert Bandits efficiently. The best spot to sit and attack is where I am in the picture. The Bandits will be able to attack you so you don’t need to move around. If you want to talk to friends in the tent south of the house, sit right beside the circular table, same deal there, they can get to you so you don’t need to move around. Well, seeing that I just talked about the Tent, now I will talk about it. 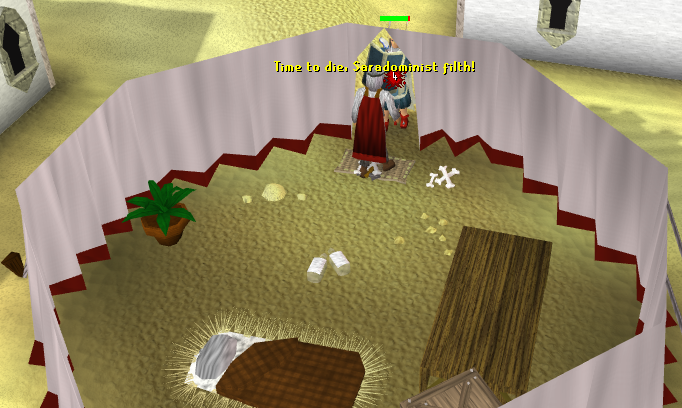 This tent has two level 57 Bandits. It is basically the same thing as the house. You can stand right outside of the tent, one step in from the entrance or anywhere inside the tent. This is a good spot for people who want to be alone because most people either try to get into the ladder house or in the “L” shaped house to the west of the tent. The tent is the easiest to get to the General store to exchange food because there is nothing that can close on you. This is normally my second choice when I get to the bandits if I can’t get the spot I want, the “L” shaped house. 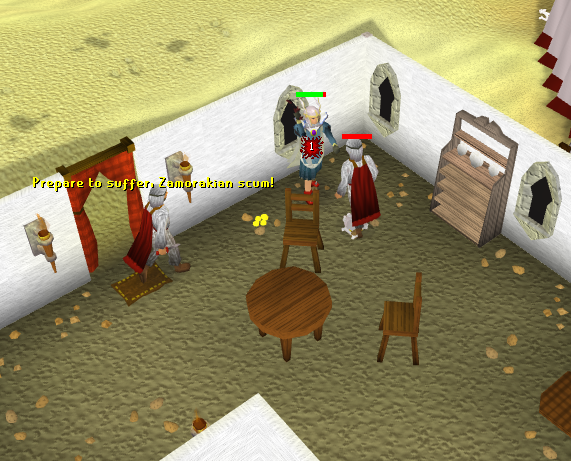 This is my favourite place to train. It has three level 57 Bandits. There is always a bandit attacking you. Unless you have a high Attack and Strength then there will always a bandit attacking you. Where I am standing is the best spot you can be in. You may have to move around a little because there will be the odd chance that one of the bandits will get stuck behind the table. The bandit getting stuck isn’t that common so look in every so often and see if they are stuck. To me, I got the most xp in that house.  Now the are two more spots but I won’t go too in-depth in the next one I’m about to tell you, which is directly north of the “L” shaped house. 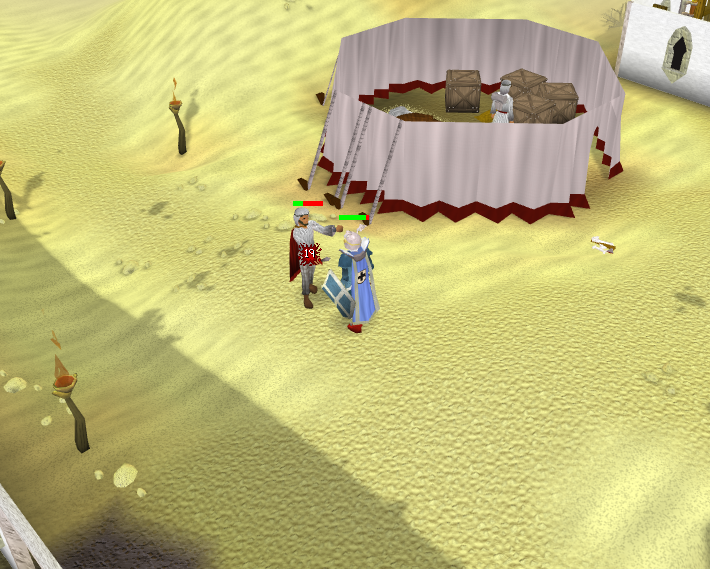 This spot isn’t my personal choice of attacking bandits. Now there are three bandits that go around the area, but the level 74 bandits in the bar can come out and attack you. It is the easiest to get to the General store out of all the spots, so, now that I’m done talking about that, now time to talk about the Bar.

There are three spots in the Bar. 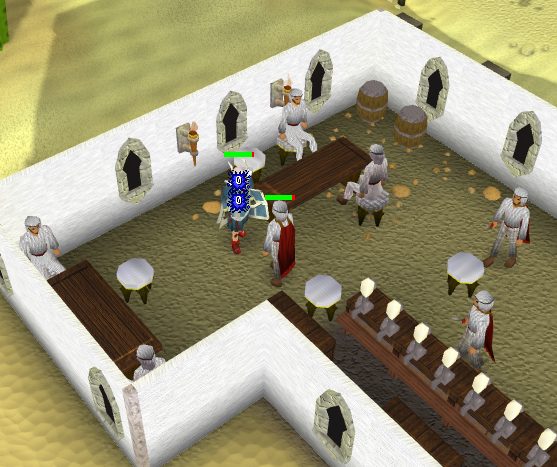 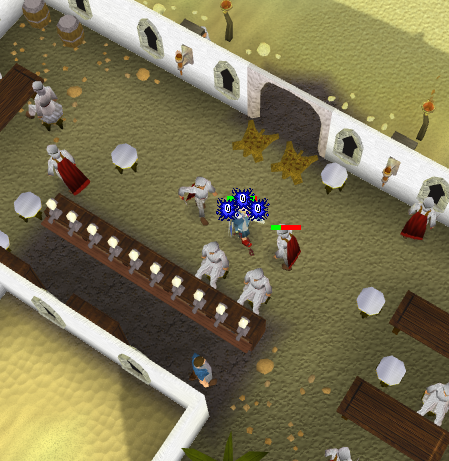 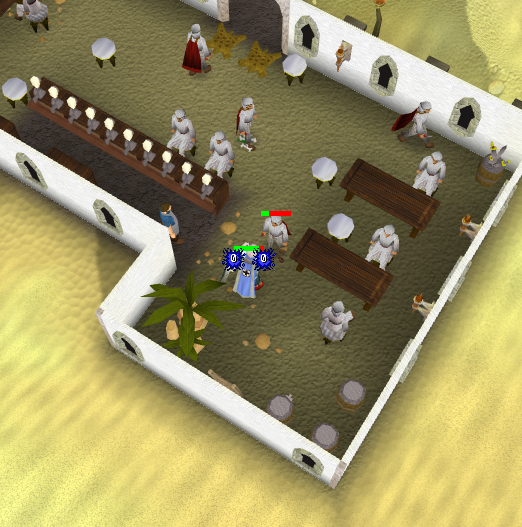 and the south. In the bar the bandits are level 74. There are around fifteen to twenty of them so watch out. They can stack on each other so make sure you watch your health or if you are using prayer (which is one of the most popular strategy in the bar) you prayer level. Now, because they are level 74, they give you more xp but they have higher hp so they will take longer to kill. If you have a high Defence then you are able to kill the Bandits wearing runite but any lower than ninety-two you should use Guthans, Prayer or wearing the best armour you can get your hands on. These give you a lot of xp per hour, between 50 000 and 70 000 depending on your combat stats. I found out that if you have the summoning level to a high level combat familiar, then summon it. They will help you kill the bandits and hopefully give you the xp that you wanted. Something else I forgot to mention. If you have 68 Summoning then you can use Bunyips as food instead of food itself. They heal you 2 hp every 10 seconds so if your armour is good and you don’t lose a lot of xp every 10 seconds, then summon one up and use it. They will really help you out by not having yourself leaving the area that you are in and possible having your spot stolen.

Well, this is all I can say about the Desert bandits. I hope you use this information correctly and I hope you can get a 99 skill fast. Good luck and don’t die in the desert.