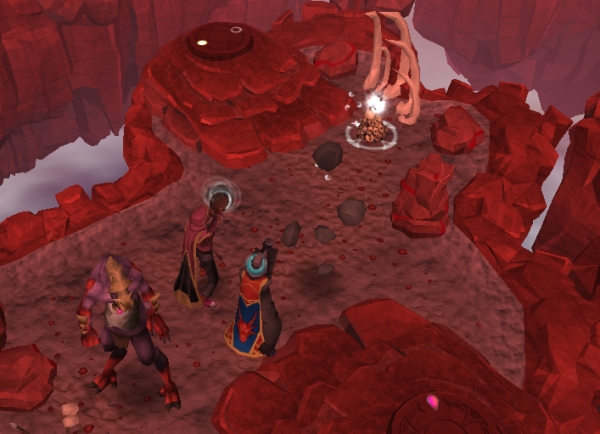 I can’t just absorb all these bloody skulls by myself!

Multiplayer games have existed since way before video games. Before sports. Heck, probably even before that one caveman game where they took turns hitting each other on the head until one person stopped hitting the other.

The appeal is intense. Billions of dollars are spent each year by people who just want to watch other people play against each other in sporting competitions; video games included.

So what makes playing with multiple people so fun?

Well, first off, you have a witness to share your achievements with. When you pull off that crazy move that you’d never be able to do again for the rest of your life, you’ve got someone to turn to, slack-jawed, and demand to know if they themselves had personally witnessed the event at an optimal angle. Or when you all suddenly complete an incredibly difficult task together and celebrating with loud shouts of joy and relief that the nightmare is finally over.

Second off, having the randomness of a second mind really makes a game more dynamic. AI can only do so much on their own, so what better way to make a game more interesting than an opponent that you not only cannot predict, but can learn to predict by delving into their psyche. When you’re working together, there’s also a lot more ad lib stuff. Maybe your friend cannot perform his task and you need to jump in to save the day. Maybe you get in trouble and call for an assist that comes with a lot of shouting and panicking.

The best reason in my opinion is that when you play together and things go wrong, you have somebody else to blame for it all. … heh, yeah, I’m kidding. Mostly. Actually, I’m not.

No, seriously, one of the main things I love about playing alongside multiple people is that you actually can blame others and get blamed back. There’s an argument and probably a few fists and hurt feelings, but when the dust settles and somebody accepts the blame, they become more focused and determined. They also learn how to better play the game a lot faster because they have someone else to point out what the errors are. It’s like having a tutor teach you the tips and tricks of the game. Of course, depending on the game, you might learn a lot more than you think.

What spawned this line of thinking, you may ask? Because after the longest time of skilling to try to get my level up and complete quests and such, I was suddenly reminded of the appeal of actually playing Runescape with more than one person. Not counting the players you overlap when you fish AFK. No, I’m talking about players you actually do stuff alongside, contributing to help in your own way.

Here’s the story. I was doing a Raptor assignment where I had to kill about 200 poor, innocent Airut. Really isn’t that hard, but man is it boring. Then some friends in clan chat wanted to go dungeoneering to help one of their lower level comrades, and I decided a break was in order. So we went and 4-manned some large med-level floors. I had already completed those floors, so I barely got 15k experience after each level.

It was so much fun! One of the guys needed some tier 9 armour, so I ran around the dungeon looking for gorgonite and megamastyx, mining and smithing and setting traps. Chopping down trees and cooking food to heal everyone, opening doors that mostly everyone (we had a guy with a completionist cape with us, of course) couldn’t. And the best thing was that nobody cared I went out of my way to do these extra things. We weren’t in any hurry to complete the floor for maximum experience gain. We were just exploring… wait, not even. We were just casually going through the dungeon. Some minor small talk, a few jokes, and a brand new set of gorg armor later, and I bade my farewells to continue the Raptor assignment before the daily reset.

Then I hit upon an idea to make it more fun. I gathered a bunch of runes for casting those multi-user Seren spells, found a more populated world at the Airut, and ran around casting Shield Dome on guys with low hitpoints, leaving behind those healing prisms, and dropping food simply because I liked their name. Took quite a bit longer to kill the Airut because I didn’t have much time between my antics to… y’know… actually fight them, but because I was having a lot more fun, the assignment was done before I knew it. 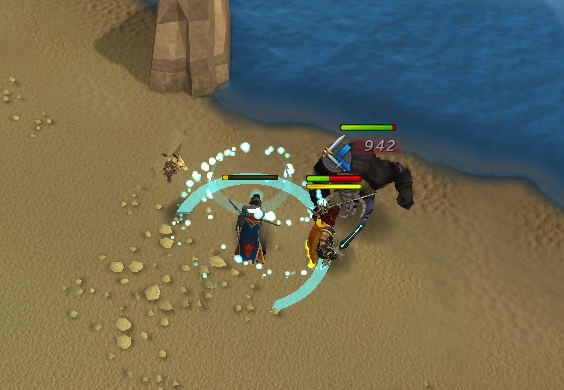 Troll-tactics that nobody complains about. That’s how I roll.

I would suggest you give it a try if you start getting bored with the daily routine. Remember, Runescape is a game. Played for personal enjoyment and entertainment. If you feel like Runescape should be a chore to get level 99 everything as soon as possible, I highly recommend you take that mindset and go do some dishes or something.