In February of this year, a new batch of abyssal slayer creatures were released in RuneScape. The toughest of these mobs, the Abyssal Lords, drop a lore book by the name of Scions of Erebus, which provides us with some more interesting lore on demonic creatures. However, this demonic lore can be quite confusing if not properly laid out; this is my attempt at doing just that. 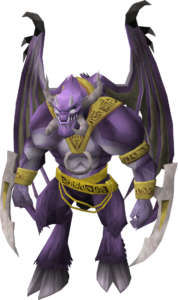 Most demonic races originate from the demonic homeworld of Infernus, a world of “jagged rocks and liquid fire”. Historically, a race known as the Infernal demons ruled over this world. Now, whenever I mention a race of demons in this article, my intention is to name various kinds of demons that belong to said race. This is difficult for this race in particular, as the only demons we know to be Infernal are the Kal’gerion demons. This includes the five named Kal’gerion Dungeoneering bosses, as well as Dagon the Gatekeeper, the demon found at the bottom of the Infernal Source. 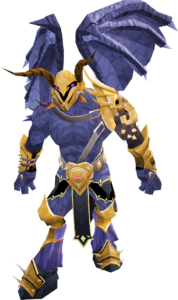 At the center of Infernus, there is an everlasting fire known as the Heart of Dis. This fire is essentially the birthplace of a race known as the Avernic demons; they spawn from the Heart of Dis. The Avernic demons are historically a slave race, considered primitive and tribal; however, there is still some sense of hierarchy within the Avernic race. The ‘highest’ tribe among the Avernics are the Tsutsaroth, also known as the Elders. The two most famous Tsutsaroth demons are K’ril, Zamorak’s general in the original God Wars Dungeon, and Thammaron, whose corpse lies in the demonic throne room accessed through the ruins beneath Uzer. The blue Tsutsaroth demons above is Zebub, who has a cameo in the Children of Mah quest but featured more prominently in the discontinued FunOrb game Armies of Gielinor. Lastly, those of you who have progressed far enough in the Archaeology skill are in possession of the soul of the Tsutsaroth demon Xil’gar Trog.

The Tsutsaroth ruled over two Avernic tribes known as the Byzroth and the Alyaroth. The Byzroth tribe consists of the creatures we know as lesser demons, which includes the Slayer master Mazchna and Azacorax, the demon trapped inside the Wizards’ Tower. The Alyaroth are a more extensive collection of demons, containing the greater demons, black demons, jungle demons and tormented demons. Perhaps the most famous of the Alyaroth are Delrith and Agrith-Naar, although most demonic quest bosses tend to fall in this category. There is one Avernic tribe remaining: the Shakroth. This tribe consists of hellhounds and blazehounds and is considered the lowest tribe among the Avernics. Other known Avernic demons are the Twin Furies, although it is unknown whether or not they belong to any of the tribes mentioned here. 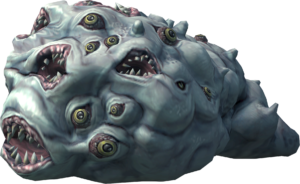 The last known race of demons are the cannibalistic Chthonian demons. That’s not a typo, the Chthonian demons are genuinely cannibalistic; it seems the only creatures in the universe they cannot consume are the Avernic demons, but all other species (including their own) are fair game. As a result, the Chthonians are known to be able to grow to immense sizes. Unlike the Infernals and the Avernics, the Chthonians are not actually native to Infernus, but they originate from the shadow universe known as Erebus. For some reason, however, the Chthonians were exiled from Erebus, after which they travelled to Infernus and overthrew the ruling Infernal demons. They used the Avernics as shock troops in their legions.

The Chthonian race consists of most high-level demonic Slayer mobs: the Abyssal Demons and the newly-released Abyssal Savages, Beasts and Lords, Nechryaels and Ripper Demons. The Virii, better known as blood reavers in-game (although the name blood reavers is officially reserved for the Virii in Nex’ service), are among the Chthonian demons as well. Another well-known Virius is Ocellus, who stands guard outside the Monastery of Ascension. Finally, the last example of Chthonian demons I will provide are two similar-looking Chthonians by the name of Senecianus and Veilinius, who you might remember from respectively Broken Home and Azzanadra’s Quest. 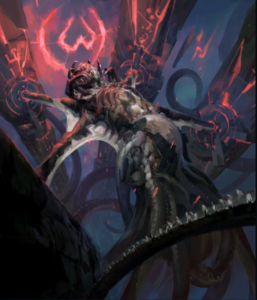 Presumably the biggest of the Chthonians is a demon known as Hostilius the Autocrat, who was the de facto ruler of Chthonian-controlled Infernus. When Zaros was looking for an army to invade Gielinor, he tricked Hostilius into signing a contract that gave Zaros control of twelve of the most powerful Avernic legions, led by twelve powerful Chthonian demons known nowadays as the Zarosian Dukes. During Zaros’ reign on Gielinor, the Avernic demons Zaros had brought to Gielinor began dreaming of an Avernic revolution to overthrow the corrupt and corpulent Chthonians. Zamorak used this to persuade the Avernics to join his side in his betrayal of Zaros. After Zaros’ supposed death and Zamorak’s ascension, Zamorak made good on his promise and travelled with the Avernics to Infernus, where they engaged in a 19-year rebellion campaign that ended in Chthonian defeat. The Chthonians that refused to die were banished to the Abyss; among them is Hostilius, who languishes between worlds to this day, and who will presumably be released in the future as a big boss encounter. Currently, a popular theory is that Hostilius will be the fifth boss in the Elder God Wars Dungeon saga, but we will have to await the summer to find out whether this is true or not.