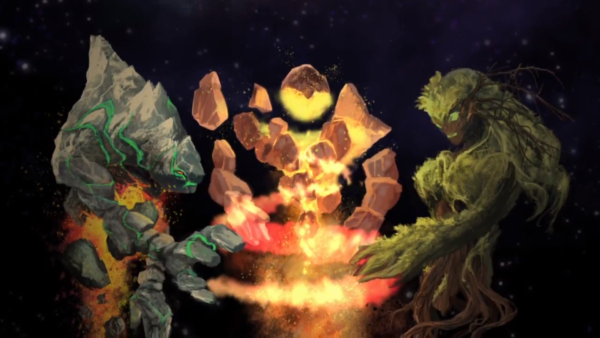 As RuneScape is currently working its way through the Elder God storyline and heading towards the Elder God Wars, I figured this would be a good time for a quick brush-up on the Elder Gods. I present to you, Forgotten Lore VI – The Elder Gods! Also, there’s an obligatory spoiler alert here: this article will definitely contain spoilers on the newly released Azzanadra’s Quest.

The Elder Gods are divine beings of immense power, responsible for the creation of all planets and life in the universe. The immediate question that arises, is: where did they come from? As much as it pains me to say, we don’t know anything about the origin of the Elders. Maybe they’ve just been around since the beginning of time, maybe they were created by an even higher power (*gulp*), maybe it’s…

The Elder Gods’ creation process works in cycles. They create a series of worlds until they create their ‘perfect’ world, on which they subsequently lay their eggs. The eggs slowly absorb anima from this perfect world until they’re ready to hatch. When the eggs hatch, the previous generation of Elders touch them and transfer their identity and memories to the eggs. Afterwards, the eggs hatch, and the newborn Elder Gods completely suck up all anima on the planet in mere minutes. They destroy all other planets in the universe and start the cycle anew. This is known as the Great Revision.

The perfect world of the previous cycle was the world we know as Freneskae. Five Elder Gods hatched from their eggs on Freneskae – Jas, Bik, Wen, Ful and Mah. There was one issue, though: Mah’s egg got corrupted in some way, and Mah was born malformed. Although it hasn’t been explicitly confirmed what happened to Mah’s egg, it’s hinted in Azzanadra’s Quest that this has to do with Xau-Tak. After sucking up the anima on Freneskae and turning it into a volcanic wasteland, the other four Elders left Mah behind on Freneskae and started the new cycle.

Due to the loss of their fifth companion, the Elder Gods required a set of tools to make up for the lost memories and knowledge. Jas created the first of these tools by sacrificing her egg, and thus the Stone of Jas was created. Using the power of the Stone of Jas, the Elder Gods created eleven more tools, and together they are known as the Elder Artefacts or the Elder Twelve. These Artefacts play a great role throughout the history and lore of RuneScape, and it’s really too much to delve into now; they might get their own instalment at a later date.

Eventually, the Elder Gods created Gielinor. Content with this world as the perfect world of this cycle, the Elders laid their eggs in the Elder Halls. The location of these Elder Halls had been a mystery for some time, but the Halls were finally discovered during Azzanadra’s Quest. However, rather than going into recent events, I will discuss the five Elder Gods we know and what exactly we know of them.

We will start small and work our way up. The first two Elder Gods are Bik and Wen, and we know relatively little about them. After obtaining the Elder Artefact known as the Measure during the Fate of the Gods quest, the World Guardian is able to find a set of four elder chronicles across Gielinor, hinting at the resting locations of the Elder Gods. Bik’s elder chronicle is found on Entrana, suggesting that Bik resides under Entrana. Wen’s elder chronicle is found on Ice Mountain. This is interesting because, during Heart of Stone, it is suggested that Wen resides under White Wolf Mountain. However, Mod Osborne stated recently on stream that this was really just a lorefail on their part, so we’ll have to see what direction they take this in next.

Next up is Ful. Ful is the creator of the Elder Kiln and the TokHaar, which is really what she’s known for. Unsurprisingly, her elder chronicle is found by the Karamja Volcano. Ful has recently made an appearance in the Desperate Measures quest, where we see her emerge from the Anachronia volcano and subsequently cause the destruction of much of Kerapac’s laboratory.

Second to last, we have Mah. As mentioned, Mah was born malformed and was left behind on Freneskae. In her desire to create life, she created Zaros and Seren as beings of darkness and lights, counterparts that were to be ever attracted to each other. In her dreams and nightmares, Mah created even more forms of life. The most well known of these are the Mahjarrat, a term which literally means the “Children of Mah”. There’s a lot to be said about Mah, but those are really stories for another time. What is probably important to mention, though, is that Mah was mercy killed by Seren during the Children of Mah quest, as a means to end Mah’s everlasting suffering.

Last but definitely not least, there is Jas. Jas is seen as the most powerful of the current generation of Elder Gods. We speak to her directly at the end of Sliske’s Endgame, when she asks the World Guardian to prove why sentient life is worthy of existence. Jas’ elder chronicle is found at the archaeologists’ camp in the southeastern part of the desert. When you speak about Jas, though, you really can’t forget to talk about the Dragonkin curse.

The Dragonkin are a race of creatures that survived from the previous cycle by hiding in the Abyss. Upon the destruction of their homeworld, though, the Dragonkin weren’t particularly amused. Kerapac tried to take revenge by creating a device that generated shadow anima, a substance that is highly toxic to the Elder Gods. In response, Jas destroyed the Dragonkin settlements on Gielinor and bound the Dragonkin to the Stone of Jas as some sort of defense mechanism; whenever an unworthy user would touch the Stone of Jas and be granted its power, the Dragonkin would hunt them down. The Curse was finally broken when Kerapac destroyed the Stone of Jas at the end of Sliske’s Endgame. Unfortunately for him, his subsequent plan for more revenge failed as well, and Kerapac was captured by Jas once again at the end of Desperate Measures. We don’t know what’s happened to Kerapac since then, but he will undoubtedly return at some point in the future.

That was it for this quick run-down of the Elder Gods! This is definitely not the only installment of this series that will deal with the Elder Gods in the foreseeable future, so stay tuned! Elder God Wars Dungeon, here we come!