RuneScape has had a history with currency based time limited events in the past. There was a time about 3 years ago where these events were running once a month with about two weeks off in between. These events worked as follows: the player played the game or highlighted content and they were awarded with a currency and then the currency would be spent to unlock cosmetics amongst other things. These events had grown old since they were played so often and the response from many was a huge groan when a new one arrived. That changed this week.

The Travelling Artisan is the first in a new format of these events. You can still play the game earning a currency and you can still use that if you wish in bulk to unlock cosmetic items and mystery boxes from the event. But that’s where the similarities end. The new format of the event takes cues from Yak Track while doubling down on player choice. As with Yak Track the new event also is heavy on progression mechanics. 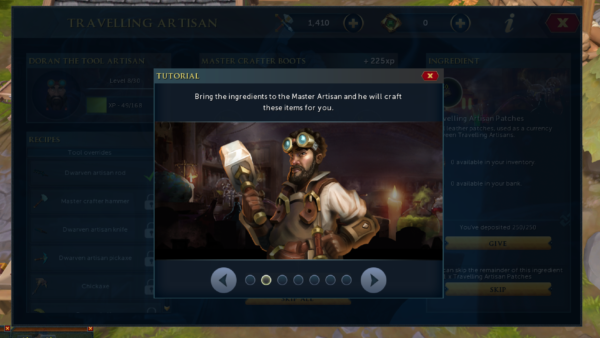 What’s more, in addition to the consumables players can also craft the Master Crafter outfit from the Master Crafting event back in March plus new cosmetic tools such as the Dwarven Rod, Knife, and Pickaxe, the Banana knife, and of course the Chickaxe. For those players who want items that you’d normally find on Treasure Hunter there are mystery boxes, bonus xp stars, and Dwarven tools that either double your experience or items you gather.

If we stopped here this event would be a hallmark in player choice but it goes one step further. When crafting each item along the way you have a choice of whether you do it the old fashioned way by using the currency you find in the game world or you can receive a hefty currency discount if you craft it using items related to that skill. For example the Mining crit chance consumable requires 250 artisan patches, 10 vials, 40 Rune ore, and 50 Luminite ore. Each of these has a skip cost associated in artisan patches as well that goes down proportionally as you contribute more items. 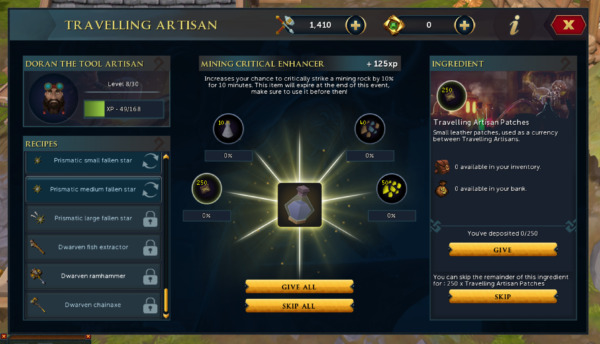 To be successful with this event in terms of optimal XP gain for the Travelling Artisan, and this is the only area where the player is pigeonholed, crafting the cosmetics will net the most experience. But in between unlocking cosmetics the player has pretty much unfettered choice in terms of what they craft since most items give between 125 and 150XP on the Travelling Artisan. Previous currency events were linear and this one allows the player to progress in their chosen manner.

The highlight of Yak Track for yours truly is the choice presented on most tasks and the varied gameplay it provides for the six weeks it runs. I see this event as a limited Yak Track providing a progression mechanic and some degree of player choice. I used to ignore currency events unless there was a cosmetic I was interested in or it was for charity but this time I’m fully involved in this time limited event. This event is a win and I hope it continues going forward as it provides a great amount of player choice and it allows for varied gameplay if the player desires.