The Underappreciated Benefits of Archaeology

After 28 skills added to the game one has to wonder what the benefits would be to adding a new skill. Archaeology is unique in that it’s a skill that has caught on like wildfire. Engagement with the game for myself has shot up: my friends are playing more, there’s more people in Clan Quest, and overall more people in RuneScape. In my history of witnessing each skill launch since Runecrafting, I can’t remember a skill that was more widely anticipated and better received except maybe Construction. Most people are enamoured with the rewards and the core loop that Archaeology brings, but Archaeology has brought a number of unseen benefits to the game. These unseen benefits have been talked about before, and most of the chattering types online seem to have missed that this skill has delivered what has been wanted for years!

The first of these three is an abundance of quality of life fixes. In the lead up to the launch of Archaeology and with the skill launch we saw a number of fixes to interfaces we use everyday such as the make-x interface and Invention interface. Archaeology itself brought user interface fixes for every collection log in game including the much coveted Slayer log. And what’s more, in the lead up to the launch of the skill we saw changes to the new player experience, player tutorials, and general interfaces for drop cleaners (Charming Imp, Bone Crusher, and etc.) RuneScape is approaching 20 years and for a good portion of these years there were no standards or reasons behind some of the interface designs. There’s good reason to assume that the anticipation of new and returning players coinciding with Archaeology was the impetus behind these changes. 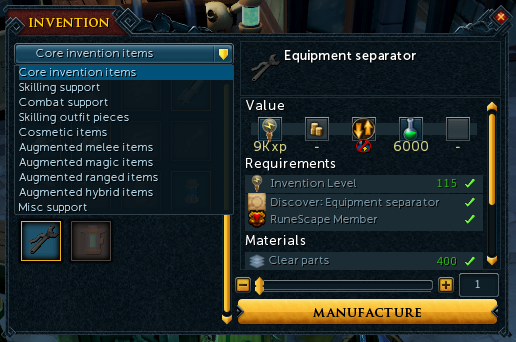 For years players have pointed to the RuneScape 3 player numbers being lower than that of Old School. While the number of bots in Old School is up for debate, we can be fairly certain they have more players than RuneScape 3. The launch of Archaeology has brought the most players to RuneScape 3 since June 2013! The numbers in March were about by about 5,500 players over January and February probably due to players staying home more often. Archaeology pushed the April average (ongoing) to over 46,000! April also saw a peak player count of 68,544. March also saw the release of the open Android beta for RuneScape 3. Once the iOS beta is released and the full mobile launch happens later this year, we can expect these numbers to spike again.

And finally, the most important under appreciated benefit of the Archaeology launch goes to the dev team. It has been said that in the surveys done on skills prior to settling on Archaeology that Necromancy was the winner by the numbers. Archaeology was different and was pitched from a whole of game, player, and business perspective. It was iterated to be more fantastical than “dusty and lifeless” as Mod Osborne said. This design process has paid off. The players love the skill, the numbers back this up, and Jagex hit a home run. What this opens up for the future is remarkable.

Jagex designed, built, and launched a skill that the players love, has boosted player numbers, and has potentially kicked off a new era of RuneScape. The skill has a showroom quality of finish to it, it’s reminiscent of what you expect in a luxury hotel or private jet. It’s remarkable to see what’s possible from this company. Back in 2017 I outlined 5 Steps to Harmony with Jagex where I said that if they hit a string of successes starting with the Player Owned Farm and Mining and Smithing and later buoyed by later updates (Anachronia, Bank Rework, 120 Farming and Herblore) then they’d kick themselves into the Fourth Act. The Fourth Act would then see Jagex releasing an update not driven by players (though they still were allowed to use surveys and ask pointed questions) and as a surprise announcement (see Shauny’s reaction when they were announcing it), this was Archaeology. And as predicted, the players enjoy it!

The next year to 18 months is going to be special for RuneScape. The game will celebrate its 20th anniversary and Jagex has significantly more community trust (but it’s still a bit weak around MTX) than it has had in a long time and has managed to pulled off some of the biggest game updates in the last 18 months as predicted. My level of engagement with the game and the engagement of my friends is at an all time high. Something has changed for the better and Archaeology kicked it off. This windfall from Archaeology is going to serve the dev team the best, serve Jagex the best, and most importantly serve the players the best.