The Farming and Herblore Ecosystem

Farming and Herblore are the two newest skills to be taken to level 120. The intent to raise these skills to 120 was announced at RuneFest and there was a fair share of skepticism in the air. These are my top two favourite skills in game, and from the start I knew what we’d be in for. I had also just written the Farming Money article detailing the Farming ecosystem; what this did for that on top of Herblore was going to be interesting without a doubt. And finally, here’s a question that I had on Monday last week; are people viewing this update with a narrow lens?

To garner level 120 in a traditional skill you need about 104 million experience, about 8 times the amount of experience needed for a 99. Slayer went to 120 with the release of Menaphos and not much changed in terms of training nor were there content unlocks at each level. We were told these skills going to 120 would be different and players would have plenty to strive for. All one needs to do is look at the news posts for Farming 120 and Herblore 120 to see that they are jam packed.

The community loved the first Player Owned Farm when it came out and it was so popular that there was a glut of animals in players banks. The sky high breeding rates and relaxed animal welfare penalties angled the Player Owned Farm for a nerf this summer. The point is though that the main training method for 99–120 is going to be the Manor Farm’s successor, The Ranch Out of Time. Couple this in with Dragons, Zygomites, wood trees, and fruit trees, experience rates will be higher than ever.

Herblore on the other hand sees its training method stay the same. Typically for Herblore training one either makes Overloads if they’re not concerned about recovering lost money. But if they want to recover some of that money back, Saradomin Brews, high level super potions, or the tradeable combination potions are good candidates. Herblore 120 doesn’t affect how we train but it does provide many interesting potions we will want to make on the way to 120.

On the whole, these two releases are entirely different than Slayer 120. The Farming side capitalizes on one of the most popular pieces of content out there, the Player Owned Farm. Herblore has some interesting potions that I’ll get to in just a bit, but to hold you over, Elder Overloads when using Maniacal or Berserker will now boost combat stats to 130. To say that from a design or execution perspective that these skills fall flat would require a person to be living in an alternate reality.

The Farming ecosystem isn’t one that many think of all too often. It requires you to have Farmed herbs for your own use. In Farming Money I talked about how it’s entirely possible for 1–2 herb runs a day to fund a Farming goal to 99 and beyond with trees and the Player Owned Farm, this can of course also be adapted to make pure profit. The Ranch Out of Time’s large dinosaurs are looking to take about 10 days to reach the “Elder” growth stage. Jadinkos take about 4 days to reach “Elder” and only net 30,000 experience from baby to elder. While the Ranch Out of Time will provide supplementary experience on your way to 120 Farming, the creatures there are better bred for their produce. 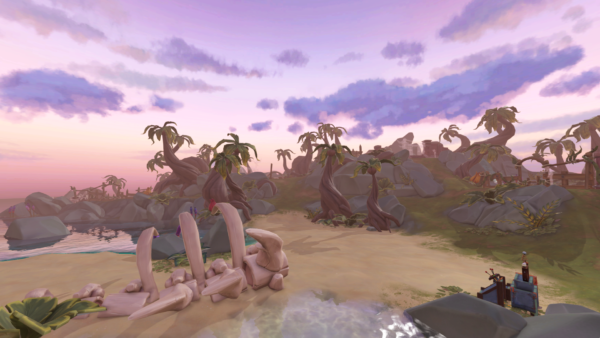 Most everything released in Herblore to 120 requires something from Farming to 120. Shortly after launch, Bottled Dinosaur Roar was selling for 100k GP per unit. The bottled roar comes from the rex family of dinosaur at the Ranch Out of Time. Beak snot from Apoterrasaurs was selling for a similar value. I could go on but what was immediately clear is that the Farming ecosystem that was, added Herblore to it in a tremendous way. This is amplified by the fact that seeds and eggs aren’t dropped like candy. The only PvM creatures to drop the seeds are Lost Grove creatures and Anachronia dinosaurs, what’s more, the eggs for the Ranch Out of Time critters can only be obtained from hunting except for the Slayer based dinosaurs.

On RSBANDBUpdate! 753 – The Deeds at the Ranch Out of Time we theorized that it will be months before the values of the seeds and produce stabilize. There have been those in the PvM community that feel these items will not be worthwhile because they don’t impact high level PvM in a meaningful way except for the Elder Overload. Not everything has to revolve around high level PvM and changing the PvM meta! In fact it appears that most of the combat based additions (bombs and power bursts) appear to help mid-level or up and coming PvMers.

Is the RuneScape community in general viewing this update with a narrow lens? No, in the sense that most everything has been researched and discovered within the week. Yes, in that at launch it wasn’t appreciated just how much this update would cement the Farming ecosystem down and add Herblore to it. We have an economy where Farmers are the exclusive producers of the new produce needed for Herblore! This is something skillers have been asking for for many years. Farming 120 and Herblore 120 continue the tradition of skilling updates that live up to the 5 year skilling plan set out in 2017. For those who haven’t or who are skeptical, I urge you to give the new content a try and step in to the new Farming and Herblore ecosystem.