Farming was released in July 2005 and at the time was the most unique skill in RuneScape. You could plant some trees or herbs, walk away, come back and get experience. Everything to date prior to Farming required you to actively engage. This combined with the agriculture aspect, the fact that many people disliked it, and its green cape made it my first 99. Those who know me well know that I wish I could have keepsaked my untrimmed 99 Farming cape.

Fast forward to 2018 and the Player Owned Farm arrives. Prior to the farm, the best form of experience was two daily wood tree runs, a daily fruit tree run (combined with Calquat), spirit trees on and off, elder trees on and off, and if you’re feeling adventurous, allotments and killing Aquanites with the seedicide. The Player Owned Farm upended this providing the best Farming experience in the game with very little effort. Logging in for less than 5 minutes a day could net you hundreds of thousands of experience for almost no cost.

Seeds suffered and earlier this summer a Magic seed has reached an all time low price of 15,736 GP. The farm accelerated the downward spiral but the trend was downward ever since top end bosses and Slayer creatures dropped seeds in bulk. A Player Owned Farm re-balance is on the way, we don’t know the exact details of what that will look like but it will make it more tenable going forward.

As a bit of an experiment during the Breaking the Storm event, I activated one of my old Tutorial Island test characters and purchased the Summer Special membership package (with Bonds). The Summer Escape got me level 60 Construction for free, as well as level 28 Farming for free. The goal was to see just how over powered the Player Owned Farm was. Aside from the Bonds, the only inputs to the character from my main have been planks and nails for the pens, 2 chickens, 4 chinchompas, 2 spiders, 2 yaks, 2 zygomites, and 2 dragons. The character is currently level 94 Farming on a fast track to 95. 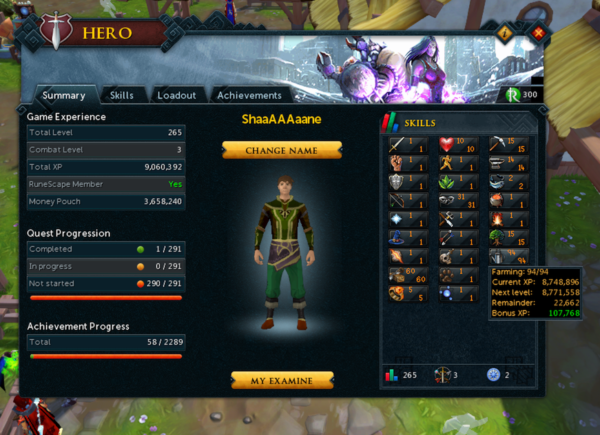 Recall that Breaking the Storm took place at the end of June. This means that in the time span of 2 months, playing in total 32 hours on the account, I have gained roughly 8.7 million experience in Farming. This was done with almost no input costs and spending no more than 5 minutes a day (most days) checking the farm. The Player Owned Farm is broken and in severe need of a re-balance both in terms of experience and what it does to the wider seed market.

There are people out there who would say, “blergh this has devalued Farming and my achievement.” I say, play the game how you want and value yourself how you want, and I will do the same. For me it comes back to always wanting to do a level 3 skiller. It’s tremendously limiting when you can’t use a certain feature (Blessed Silver Sickle) to farm fungi because you’ll gain Prayer experience through the unlocking quest. I would also like to try getting my second and third original 99s on this account (Woodcutting and Herblore) but I need to see how I feel after getting 99 Farming again and develop a strategy to farm 2 bonds a month on my main. This is part of the challenge and it’s an interesting lens to look at RuneScape through in 2019.

I also have more questions than answers when I first started this endeavour. In the beginning I thought that it would be a simple matter of measuring how powerful the farm is. How many other skills are this fast (30–99 in 2 months or less)? The farm is obviously not right but how little engagement (in the coming era of RS Mobile) is too little? Would it have been more rewarding to make a push for Song of the Elves? And finally, how fast should RuneScape be in 2019?

This last question is incredibly important because we’ve seen a recent push to re-balance Hunter and now the Player Owned Farm. Safe cracking should be on this list as should the waterfall. But having experienced being able to start up as a member, do some research as a new player would, it is rewarding to be able to complete portions of the game in a summer? Not in 2004 but in 2019, maybe.

The XP rates we currently have in-game are light years ahead of what we had when RuneScape 2 first launched. 99s are accepted, 120s are the grind now, and 200m xp if you’re feeling adventurous. A decision needs to be made by the skilling council and creative directors at Jagex: is the XP chase an endgame goal? If yes, give us some form of prestige mode (at its most basic, just a pet that tracks XP and changes appearance every 13 million xp or 104 million xp) or an XP challenge that goes beyond 200m xp. If not, let’s balance the game so maxing takes 10–15% longer and 120s take 50% longer.

A decision needs to be made.