Be Bold, Be Brave: The Competing Business Case

The completionist cape (comp cape) first came into game back on May 3, 2011. Along with it came a trimmed variety that had utterly insane achievements, such as playing 5,000 castle wars games (yes, 5,000 games, it was later changed to unlocking a full set of profound armour). The completionist cape has always been best in slot stat wise and it imparted the benefits of practically every other cape in game. Put quite simply the completionist cape is over powered, though this article isn’t going to debate that point.

After the Mining and Smithing rework launched we heard that Mod Jack and his team (Four Direction) were going to be tackling the comp cape rework. The first design was a total re-imagining, getting to the same place while making the cape feel less mandatory stat wise and moving passive benefits onto the player. The re-designs also took care of controversial requirements such as the aforementioned Castle Wars gauntlet and Reaper (killing all the bosses). The first design also added in several meta achievements for completing all of the skilling, lore, combat, areas, and activities achievements.

We started to get somewhere around the second or third design revision when these capes were finally named and the achievements that would residing in them became defined. It was also at around this point that we saw concept art for what the capes could ultimately look like. These later designs fixed the problem of stats and benefits on the actual cape bringing choice to what cape you actually want to wear, allowed a pathway for new requirements to be added, and fixed the problem of controversial requirements by adding new tiers. Finally, the new design also defined what the completionist endgame of RuneScape would look like (a game can have more than one endgame). 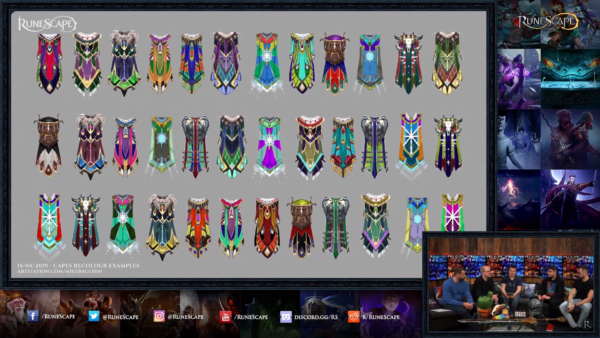 Jagex has earned the right to be bold and brave. This is part a multi-year comeback from the confidence disaster that was the Evolution of Combat. We’ve talked about this many times before including on Informer in 5 Steps to Harmony and on Update just last week. This completionist cape rework has been an impressive, thoughtful, and important examination of the culmination of years of RuneScape play time. Folks like Cireon and myself have seen this from the design perspective and were largely onboard from the beginning (except 120 virtual levels for me). Whereas the players are rightly concerned with the here and now. The design is just too important to focus on today as with no rework the question of what to do after maxing remains unanswered.

While yes, the completionist cape and trimmed completionist cape exist for after maxing, it is a very steep hill to climb. Two of the hallmarks of good game design are choice and progression. With the rework you’d have the choice of determining whether you want to focus on lore, combat, skilling, activity, or area achievements first. You’d also have clearly defined progression because of the intermediate capes and the tiers within each of these achievement baskets as well. For that I am disappointed with the recent news that the design has been simplified.

The design has been simplified to the point where it can be boiled down to 4 bullet points. This design isn’t bold, it isn’t brave, and it cuts out key elements of choice and progression.

Jagex also says that in the future there will be clearer definitions for achievements when being added to the cape. Future add-ons won’t cause controversy. Finally, existing content could see achievements added as well but not in a huge batch. This is the comp cape rework we are getting.

This is a simple and elegant design to a problem that exists in game. Design wise had we not seen what was possible in terms of progression this design would tick all the boxes for fixing the problem. Simpler is also often better when it comes to design. We have been told that programmatically it is going to be relatively easy to implement compared to other updates. Also in my chats with those who already have the cape, they don’t mind this design. The people who are upset are the ones who consistently look forward and hope for a better future because a glimpse of what we saw won’t become reality.

There is also the reality that this design is the better business case. It is a lot easier to keep a player who has spent hundreds of hours in game than it is to find a new player who will do that same thing with an untested and unproven design (the elaborate comp cape rework). If a chunk of the completionist player base left, Jagex would have to build that demographic up again and there’s no way of knowing if the new elaborate design would have done that. There’s also the question of accumulated good will. There’s a big Hunter update coming down the pipe that affects the balance of the game whereas comp affects gameplay progression, and Jagex may be choosing to use player good will on the Hunter project rather than a risky comp cape rework. As they say, it’s nothing personal, it’s just business.

While being bold and being brave is something Jagex will be able to do going forward, I am optimistic for the future. We still have an achievement system that is largely untapped. Let’s not preclude the possibility that meta achievement capes (similar to virtual 120s) could be added for completing the achievement categories. This would add progression to comp and give players a little something to show off. If these were added as cosmetic options we would almost be where we were at with the elaborate rework while accomplishing the mission and keeping players happy.