Producing and recording a podcast is an endeavour that on the surface may seem simple but if someone new to the world of podcasting was to jump right in, it would be very overwhelming. Since we started RSBANDBUpdate! in 2005 we’ve gone through a variety of recording setups, all becoming more refined than the last. This month I wanted to talk a little bit about the recording and editing side of the podcast since they’re in some ways a black art for listeners and now viewers.

The most important thing to understand when it comes to podcasting is that a podcast setup can be as simple or as complex as you need it to be. It can be as simple as a couple people sitting around a microphone chatting. It can also be as complex as harnessing the power of a studio that rivals that of CNN. Our current setup sits in the middle after having moved from simple to slightly more complex over the years.

The most important feature of any podcast setup is the content being discussed. If the content is bad, no matter how good the setup, the podcast will be bad. Focus on content and being yourself before investing copious amounts of time and resources into a podcast setup. Now with that being said, the setup about to be laid out works for our purposes and may be far from optimal or feasible for anything you may want to try in the future.

The microphone is something that everyone hears and is very important. There are any number of good options that one can use setting up a podcast studio today. Here’s a spectrum of different microphones that will get the job done: 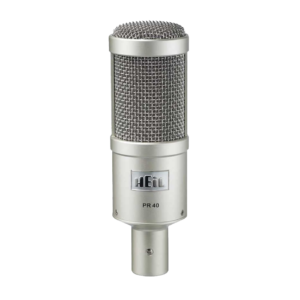 In summary if you’re guesting on a podcast the H390 will suffice. But if you want to bring gaming into the mix, go for one of the Steelseries Arctis headsets. If you’re wanting something dedicated at a introductory level the ATR2100-USB is great. If you want something truly professional the Rode Podcaster or Heil PR 40 depending on your use of external hardware.

With the Heil PR 40 and potentially the ATR2100-USB you will need an external audio interface. These come in two forms, either an actual audio interface or a mixer. When building this my current audio stack at the start of 2016 I was coming off years of using software audio routing. The audio routing I was using suffered as a result of changes to macOS that introduced lag into the setup. By the end of podcasts it was not uncommon to have a second or two of audio lag between the different audio tracks. This told me I needed something that would just work. The simplest solution was to get an audio mixer that would abstract all of this away. I went with a Mackie ProFX8 v2 since it met the feature set required. This included: USB output, aux sends (ability to send a track out over a different output i.e. send my mic output but don’t send the Skype participants), and enough tracks. In reality 4 tracks would probably be enough but the 4 track version doesn’t include USB output. Behringer also makes decent mixers if Mackie doesn’t have any products that you specifically like.

A Mac. I use a Mac with my podcasting setup for two very critical reasons. The audio system of macOS is truly robust and lets you do some very interesting things out of the box. First is that there’s a great piece of freeware called Soundflower that creates a virtual audio device. Secondly, is that the system lets you create what are called Multi-Output devices. These are virtual audio devices that combine audio devices on your system for output. What I end up doing is creating one of these Multi-Output devices so that my system audio output (listener questions, YouTube videos, etc.) gets sent both to the mixer for recording and over the same channel as my voice to those on Discord or Skype. Finally, Audio Hijack Pro, today Audio Hijack Pro just serves to split the output from the mixer (that has me on the left track and guests on the right track) into separate audio devices so that I’m not feeding back the guests audio to them over Discord or Skype. Recently this also let me split audio into separate tracks for our video recording but more on that later. It is these 3 sections of the audio system on macOS that prevents me from recording on Windows and limits this type of setup to a Mac. 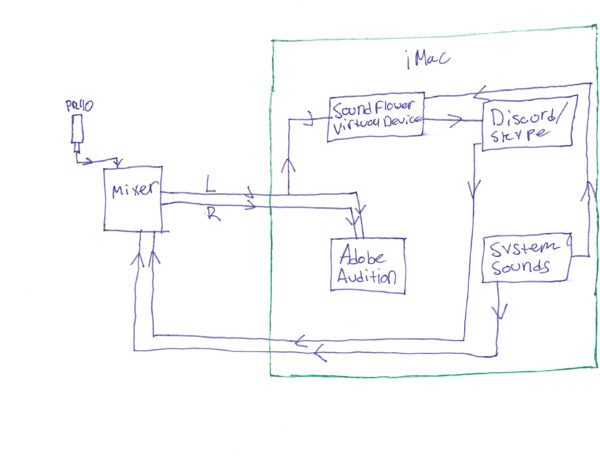 From here the audio is recorded in Adobe Audition with my voice being on one track and the guest(s) being on another track. After recording I run noise reduction if necessary on any of the tracks to remove excess fan noise or hum. Following this it’s a really simple workflow that doesn’t overpower the audio:

After this any cuts to remove interruptions or profanity are made. The intro and close out music are applied and the teaser and show title are attached. To finish up the editing session the final version is exported as a 64 Kbps mono MP3. The show is then uploaded to the website with appropriate show notes and pushed out to the iTunes feed.

Recently we’ve started recording video for the podcast as we’ve reached our Patreon goals. For this we utilize OBS (Open Broadcaster Software) to live switch inputs while recording the podcast. To make this as painless as possible we’ve swapped back to Skype since their newest version ships with NDI output. NDI (Network Device Interface) gives us a video (and audio feed if we want it) from each participant on the call. These can then be input into OBS at full 1080p HD resolution. As of writing this article, our video workflow is evolving. Talk to us again in 6 months time to see if it’s the same.

If you have any questions in particular feel free to comment on our forums or send me a direct private message!