This guest article comes from Cireon. Cireon is Head of Clan Council at Clan Quest and frequently appears on RSBANDBUpdate!

Recently, history was made with the launch of the Falcon Heavy, and the subsequent landing of its two side boosters. Elon Musk’s SpaceX is not the only private company aiming for the stars: both Blue Origin (from Amazon founder Jeff Bezos) and Virgin Galactic (part of Sir Richard Branson’s Virgin Group) are making huge strides towards making spaceflight accessible and affordable. This is putting existing companies providing launch services such as ULA (the United Launch Alliance, a joint venture between Boeing and Lockheed Martin Space Systems) and Orbital ATK under pressure to keep innovating. Meanwhile, US President Trump has shared the intention to put another US astronaut back on the Moon, but it remains to be seen if NASA’s Orion can beat the SpaceX Crew Dragon. 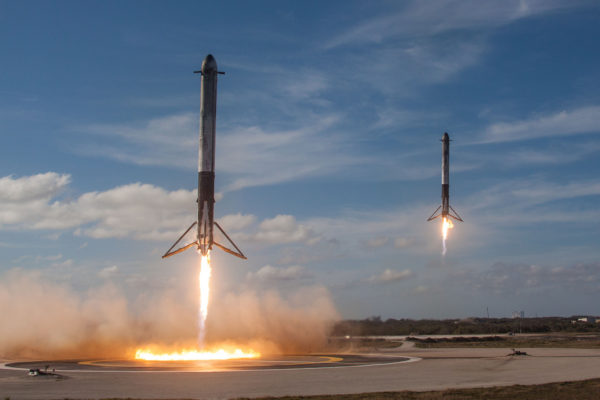 The two side boosters landing simultaneously after the maiden flight of the Falcon Heavy.

With all these companies trying to be the first to reach the Moon, or Mars for that matter, it seems that the Space Race is back on. The Falcon Heavy launch got large attention both by enthusiasts and the media. I daresay the general public hasn’t been as involved with space flight since the days of the Apollo program. With the rise of internet streaming, watching a rocket launch has become easier than ever, and the Falcon Heavy launch gathered millions of views on their YouTube stream at the time of launch.

A race is not a race if there is nothing on the line. Back in the 60s, during the first space race, there was considerable prestige to be gained in space flight, but the technology developed also paved the way for intercontinental weaponry. I’d like to believe weaponry is not the main reason for the current space race, but that doesn’t mean there is nothing to be gained.

First of all, considerable prestige. That may sound like nothing, but how much have you really heard about Blue Origin, Virgin Galactic, or the Orion program, compared to SpaceX’s Falcon Heavy launches. You can be certain that the PR departments are running full steam ahead at SpaceX, and with success. It is great for attracting investors. Space flight is a long shot when it comes to running a profit: SpaceX, Blue Origin, and Virgin Galactic are not running a profit, and the national space programs (NASA, ESA, Roscosmos, etc.) require continued government investment to be kept running. Securing investments is very important to keep these private companies run in the short- to medium term.

Proving reliability is not only good for investors, but also for those who’d like to put things in space. Ever since the retirement of the space shuttles in 2011, the Soyuz by the Russians is the only way to send people to and from the ISS. This is not the ideal situation for agencies like NASA and the ESA, and they’re looking forward to having alternatives. The situation is less grim for cargo flights. In addition to the Soyuz from Roscosmos and the Falcon 9 from SpaceX, the Atlas V from the United Launch Alliance and the Antares from Orbital ATK. The ESA also has the Ariane series which they developer themselves. However, rocket science is dangerous, and expensive. Companies like SpaceX are revolutionary by pushing down the costs by reusing boosters, and showing this does not go at a cost of reliability (96% launch success versions the Soyuz’ 97.6%). The Falcon Heavy is also the highest capacity launch vehicle as the Saturn V, the launch vehicle for the Apollo missions and moon landings.

There is a lot to be gained in getting these contracts. Not only for cargo missions, but also the next big step in space flight: space tourism. It is very likely that space tourism will be commonplace one day, but during the first few years, it will be a privilege to be spent a lot of money on.

I think it’s clear why the space companies matter about winning, and maybe we can have our reasons to matter about who wins, but what we should care most about, is the race itself.

Many technology we use in our everyday lives were developed during the first Space Race. Satellite TV, laptops, smoke detectors, and ear thermostats wouldn’t exist in the manner they do today if J.F. Kennedy had not said the famous words “We choose to go to the Moon!” Without doubt, the new space race will also move technology forward in ways we cannot even imagine today.

There are more direct effects as well. All those technological developments will also make space flight safer and cheaper. In the next decade or so, space tourism will take off, which means you can finally fulfill your dreams of going into space (or not). If – instead – you want to tag along with Elon Musk’s dream of making the human species interplanetary, that is within the realm of possibilities too now.

Competition matters. For years, space agencies were content to keep doing what they were doing. Powered landings – the kind the Falcon 9 does – were only thought of in the theoretical sense only a few years back. Now, it has been proven to be possible, and other companies will have to move forward with reusability as well to keep up with Falcon 9’s affordability. As a matter of fact, the ULA, which currently is one of the launch service providers for the ISS, has announced that they will replace their expendable Atlas V rockets with the new reusable Vulcan rockets. What’s more, this is surely only the first of many technological advances we will see in the race to put astronauts back on the room, and after that Mars.

Yes, the space race is back on, and we should all follow it with interest. 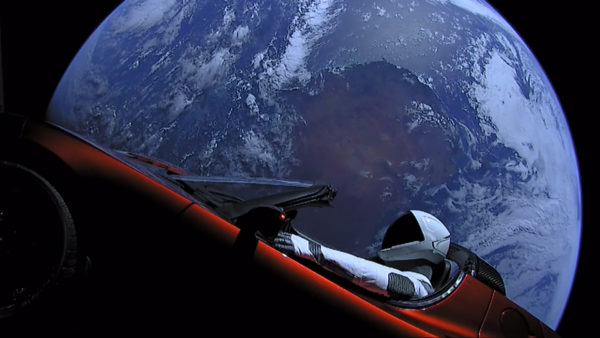 “Spaceman” cruising in orbit around Earth, after being sent up with the Falcon Heavy during its maiden flight.

This article is filed under Real World, Tech. You can follow any responses to this entry through the RSS 2.0 feed. You can discuss this article on our forums.
Navigation