Back in 2011 I did my initial analysis of the RuneScape GUI. There were a myriad of issues with the current state of the game interface. It was unclear what direction the interface was ultimately going to go in. However, since then we’ve been blessed with RuneScape 3. RuneScape 3 fixed many of the interface issues that were present in 2011 and made the game much more playable. Since it’s clear we are in a better state than we were in 2011 this month I’m primarily going to be highlighting why our current interface is better and a few nagging issues.

RuneScape 3 was to be a new interface, a new audio engine, and a brand new HTML5 rendering engine. We got 2 of 3 of these which can be considered a great success given how experimental the HTML5 rendering engine actually was. The main new feature of the RuneScape 3 interface aside from an updated look and feel was the customizability of the interface. Previously we were left with what Jagex deemed as the best interface. Now there can be any number of combinations… for better or worse. We now have a unified area for all settings under the escape menu where it should rightly belong rather than in panels intertwined with game settings such as the magic spell book. We also have better separation of player and character based controls. This means that items relating to you the player (community, Player Power, high scores, etc.) are separated from those of your player (gear, appearance, combat styles, etc.) This was achieved through the universal game ribbon that separated out various functions.

The game ribbon is perhaps the best part of the RuneScape 3 interface. It has five main areas that house every RuneScape setting known to exist:

The ribbon can also be customized for advanced players who know what areas of the interface they use most and want quick access to those features. This essentially makes almost any area of the RuneScape 3 interface accessible with one click. A great bit of usability that did not exist with RuneScape 2.

When RuneScape 3 came around every aspect of the interface was examined and cleaned up to meet a modern standard. This resulted in seeing the consistency issues mentioned in 2011 fixed. Gone are the days of having 3 different styles of scrollbars in game. Gone are the issues of managing preferences mixed in with actual game actions. And most importantly, modal interfaces (interfaces that require full attention) are now used sparingly.

While the new interface is a great improvement there are a few nagging issues that would improve the end product. Icons used in the chat system are duplicates of those used on the friends list. An icon to delete a friend is the same icon used to leave a friends’ chat channel. From what I can tell this is the only remaining offender for duplicate use of icons. The clan icons are similar though different enough to symbolize a clan. The fixed window method of playing the game still exists. While this is a throwback to the days of RuneScape classic it isn’t nearly as bad as it could be. Players can design their own fixed window interface if they want but fixed window doesn’t provide nearly as much flexibility as the other options. Finally, a new issues was introduced with RuneScape 3: the odd and unpredictable pinning of interfaces.

Each aspect of the interface is movable in RuneScape 3. The map, the chat boxes, your backpack, even the developer FPS overlay. With all of these movable items unless your interface is locked they can be moved anywhere with one exception. The exception is that even if your interface is locked and the window resizes to a point where it’s unable to house all of your panels the game will attempt to move and resize your interfaces intelligently to make them fit. Normally this wouldn’t be a problem but the RuneScape game client doesn’t remember its size when it’s closed. This means you either need to play maximized or hope that you will choose a size that is somewhat close to your saved interface. For those who don’t play at a consistent size this means that they need to move interface objects around whenever this intelligent resizing happens, which after a couple years gets annoying and you just accept that you’ll play the game without a locked interface.

A solution to this problem would be to allow interface objects to be pinned relatively. This means that if I move my chat to my lower left corner I could pin that one object. This would mean that while everything else (action bar, backpack, map, etc.) would be free to move the chat would always reside in the lower left corner. A blanket lock all could still be available but this level of granular control would fit with what RuneScape 3 was designed to offer the player.

Right now this issue with interface objects moving on resize and relative pinning is the biggest issue for RuneScape 3. The only other issue that I see frequently is the fault of the player: poorly laid out interfaces that if shown in screenshots could give the game a bad impression. Remember, each and every person is free to have their own interface layout no matter how usable or not. We’ve come a long way and a piece of software is never finished. I think it’s fitting to have a look back at the interface mosaic I published in 2011. It has been updated for all the steps in between 2011 and today. 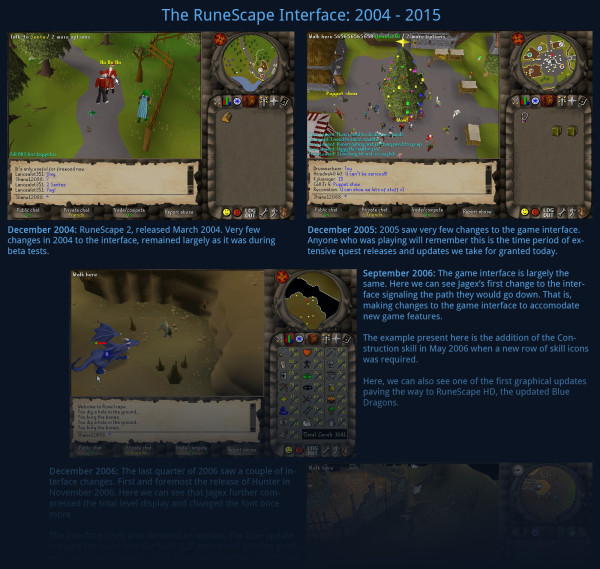