The Thinning Line Between Game and Reality

If you’re reading this today there’s a good chance that you play at least one video game. Video games have evolved in amazing leaps and bounds since the era in which Pong was published. Game graphics and sound have gotten so good that with the right equipment their environments can be indistinguishable from the real world. Not every game has to be that real though and that’s where many of the joys come from. Does RuneScape look like the real world?

There are various levels of realism that we see today. We have the complete fantasy realm which encompasses games such as RuneScape and Star Trek Online as two examples. Then there are games that have concepts of real world objects but are clearly a fantasy, two favourites in this category are Team Fortress 2 and the Saints Row series. Then there are games that attempt to create a feeling of realism but often ruin the feeling with action sequences that are quite simply over the top. This is exactly where two very popular game franchise fit: Call of Duty and Battlefield.

This brings us to expressions of realism. One thing that has always interested me has been the field of aviation. In line with this I’ve been no stranger to flight simulators. With the powerful computers of today it’s exceptionally easy to create a vivid simulation. Flight simulators offer varying degrees of realism depending on personal preference. For the remainder of this article I’m going to be talking about my flight simulator and why I enjoy it.

In 2010 I discovered X-Plane, initially for the iPad, and later X-Plane 9 for the PC. X-Plane has now advanced to version 10 and it provides one of the most realistic experiences I have ever seen on a computer. X-Plane can simulate anything that flies in the air. Helicopters, general aviation planes, jet airliners, fighter jets, gliders, and even the Space Shuttle! The level of aircraft realism depends on the aircraft itself. Some aircraft are highly detailed visually while using a standard X-Plane aircraft model. Other aircraft have technically accurate flight characteristics but may have a low polygon count model. The best of both worlds is possible with aircraft that are highly detailed in both flight characteristics and visual modelling.

The environmental features of X-Plane 10 are in another league entirely. The global version of X-Plane 10 ships with scenery for the entire globe from 80 degrees north to 60 degrees south. X-Plane can also grab live weather data from where you are flying and replicate it. Sunny day? No problem. Large storms with low visibility and wind shear? A great place to demonstrate the auto land features of many aircraft. X-Plane also knows how to generate cities and the roadways within them. This creates an amazing experience, especially when flying at low altitudes. The environment changes that came with X-Plane 10 greatly improved how real the simulation felt. X-Plane 9 was already excellent in terms of aircraft mechanics and X-Plane 10 finished the job.

Now the question comes up, is X-Plane a game or a simulator? X-Plane markets itself as a simulator so therefore it clearly must be, right? X-Plane allows for users to skip most of what they’d find boring and start flying right away. I personally don’t find this part boring and start the engines manually on whatever I fly. On the same vane of starting engines manually, X-Plane also allows for an instructors station to be set up to actually simulate failures on the aircraft. X-Plane also sells a USB dongle that enables a pro version, this pro version allows X-Plane to be used in dome simulators, provides hardware checks required for FAA certification, and allows X-Plane to drive real GPS units. The ultimate answer to the question above is that it entirely depends on the user whether X-Plane is a simulation or a game.

Here are some screenshots from a flight from Vancouver to Seattle. 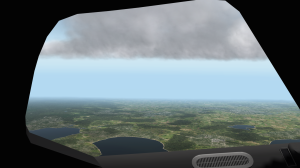 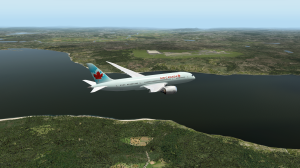 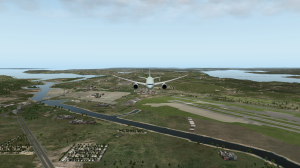 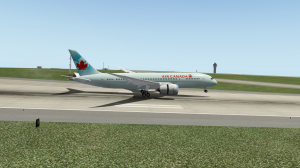 The level of realism that is able to be achieved with X-Plane is amazing. As it stands right now it is possible to experience performance issues on even high end systems. This is a good thing as it means the simulation can become even more vivid. This raises the question of whether or not this level of realism is required for other games. Granted not everyone wants their games to be as real as a simulation but should it be an option as we move forward? I think so.

Realism requires not only realism in terms of the graphics which most games today can do beautifully. It also requires a degree of realism in terms of the game mechanics. I would love to play a first person shooter where if I get shot in the arm my aim is off horribly or if I get shot in the leg I can’t move. Advancements in virtual reality such as the Oculus Rift provide an interesting view of where full immersion could go in the future. Right now technologies like Oculus Rift are too cumbersome to use easily and are very early pieces of technology that are just previews of what will become available in the future.

What do you think? Should games be left with a moderate level of realism or should they focus on increasing realism with the hardware that we have available to us?