I’ve been using Windows 8 full time now (on my gaming PC) for about two weeks. I also played around with it quite a bit during the test lengthy test period from beta through consumer preview. Through all of my usage on and off over the past year I learned one thing that quickly needs to be addressed, Windows 8 is not another Vista. The quality of the release is good, as good as Windows 7 from my point of view. This is not going to be a review in the typical sense of an operating system review. I instead want to highlight a few key features of Windows 8 that make it shine and what this means for Microsoft going forward.

The first thing users will notice when starting Windows 8 is the new Start screen. The new Start screen replaces the Start menu that’s been in existence since Windows 95. Many are complaining about this change but personally I see it as a breath of fresh air from a company that has always been leery of pushing the envelope on innovation. Apple slowly changes the way things work around OS X over the span of 2-3 operating system releases. Microsoft on the other hand moved from Windows 95 to Windows 8 by just changing the appearance of the Start menu and adding features like search along the way. This was a change that was long overdue and it provides a more consistent experience among all Microsoft products which is a good thing. To all the naysayers out there, everything you used to be able to do with Start (and more) is available by just moving your mouse to the bottom left corner of your screen and clicking or pressing that Windows key on your keyboard. The point that the new Start screen takes focus away from the active application is moot. It doesn’t really matter because by selecting the Start menu in an older version of Windows you were always wanting to bring up a new application or search for some file. The new Start screen accomplishes everything the old Start menu did and enables heads up information through live tiles which display snippets of information for at a glance consumption. In fact, the new Start screen may be more efficient as you don’t need to view your desktop as you can access applications right away (assuming they’re pinned). All in all, there’s nothing to be scared of with the new Start screen, it’s no less efficient and it serves the same purpose as your old Start menu, it looks fantastic, and it’s a great evolution to a well aged operating system.

The Windows 8 Start screen focuses heavily on the Metro design language. Microsoft doesn’t officially call this style “Metro” anymore, simply the Windows 8 Style User Interface, but we’ll call it Metro from here on. Metro is minimalistic, it also features clean clear cut edges, an emphasis on typography, and live data. Those of you who have talked to me know I am a design minimalist, this is one of the reasons that I like Metro. For those who aren’t as easily convinced, it’s not about bringing your Xbox or phone to your desktop PC; it’s about using those same techniques to deliver data to you in a clear and concise manner. Metro is what makes the new Start experience work. Without Metro the new Start screen would be superfluous as it would be just a launcher. Metro is enhanced by the applications that you decide to install on your PC. Seeing as Windows 8 just launched there really aren’t many third party applications that show off Metro and its true abilities. For example, applications when installed can integrate directly into the system search. Want to search for RuneScape? You can do that system wide, on Bing, on Google, or in your applications from one simple interface. Users of Windows Phone will know that applications can offer a glimpse into their current state without launching them through the use of live tiles, these exist in Windows 8. A simple live tile would be one that shows the current temperature outside or the newest picture in your photo library. Once application developers start embracing Windows 8 we will hopefully see a new level of innovation to Windows application development that has not been seen in years. Once again, Metro is not being forced on you, if you want to just use the Start screen as a launcher and install classic desktop applications that’s fine.

Now that we know what’s new with Windows 8 I want to talk about 8 reasons to upgrade from Windows 7 (or Vista or XP) for those that aren’t convinced that the new Start screen and metro system are reasons worth upgrading.

1. Quick Boot – Quick boot is a feature added to Windows 8 that drastically reduces the start time of Windows. You might think that a SSD (solid state drive) is needed to take advantage of Quick boot but traditional spinning drives can take advantage of it as well. If you don’t want to preserve your system state there’s no reason anymore to not shut down.

2. WiFi Resume – WiFi resume speeds have been drastically improved. WiFi is enabled and ready to go by the time your PC wakes from sleep. There’s no more lag time between entering your password and waiting for the connection to your network.

3. Reworked Task Manager – Task manager is an important tool for any power user. Task manager has received a makeover allowing a much more in depth analysis of what exactly is going on with your system. Want to see which application is hogging your network bandwidth? You can now do that. You can also now manage startup processes and clearly see what resources other users are using. 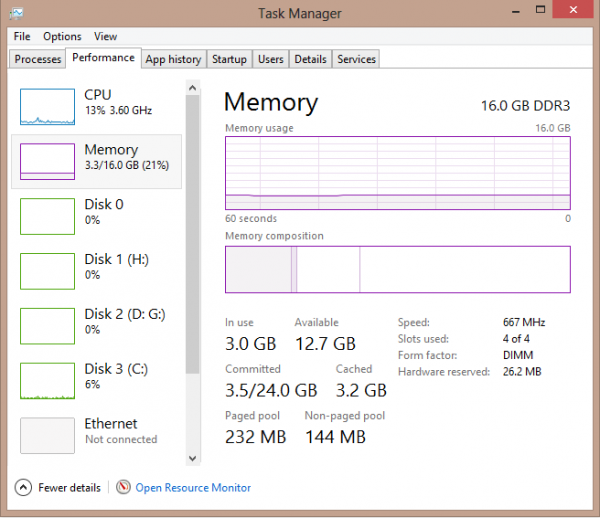 4. Windows Explorer – Windows explore got a makeover with Windows 8 as well. Windows Explorer uses the ribbon that we’ve all been accustomed to since Office 2007. The great part about this is that the ribbon can be hidden if you’re looking for a minimalistic file browser view. As with Office the features of explorer have all been brought to the front to limit the need to shuffle through menus. Oh and the transfer files dialog has been improved as well.

5. Refresh your PC – We all know that over time our machines tend to get cluttered with things we no longer need. Microsoft has now given us the ability to restore the PC to an almost new state preserving your files and Windows Store applications. This is excellent as it should eliminate the need for most cases of reformatting.

7. Built in Malware Protection – Windows 7 brought us Windows Defender built in, Windows 8 brings Microsoft Security Essentials built into the operating system. Microsoft Security Essentials is Microsoft’s free offering to combat PC malware. This means a new PC is able to achieve a reasonable level of protection out of the box without spending a cent or configuring any additional software.

8. Price – Microsoft took a page from Apple and their most recent releases. The upgrade price for Windows 8 from XP, Vista, or 7 is only $39.99. This nets you the “Pro” version of Windows 8 which is the mainstream version and pretty much every feature a normal user would need. Be sure to act before February as this deal ends then and the price will increase to something on the order of $149 or more.

There you have it, 10 compelling reasons to upgrade to Windows 8, 8 of which are features that have nothing to do with the new Start Screen or Metro. In a way Windows 8 is suffering from the same problem that Vista suffered from, a cult mentality online that the product sucks, when it clearly doesn’t. I hope that this has resulted in you changing your mind about Windows 8 or at the very least giving it a look if you weren’t planning on upgrading. If you want to take advantage of the $39.99 Windows 8 Upgrade pricing you can purchase a downloadable version from Microsoft here.

If you have any further questions about Windows 8 or this article in general please don’t hesitate to post in the discussion topic or private message me. See you next month!