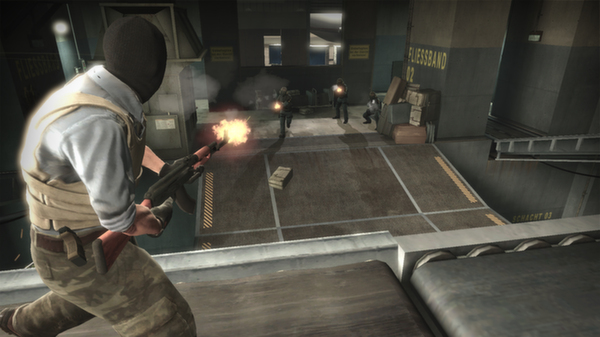 As many of you may know, Valve recently came out with a reboot of their popular FPS series, Counter Strike. Though first person shooters aren’t my favorite games to play usually, they still are worth a view every so often just to see if there is anything new or noteworthy. While still comparatively similar to its predecessors, Counter Strike: Global Offensive continues to carry on the legacy of a franchise that while not the most graphically pleasing or mechanically sound, is a solid FPS.

The biggest difference between CS: GO and other games in the series is graphics. While Counter Strike: Source still has decent enough graphics especially in comparison to Counter Strike 1.6, CS: GO does improve quite a bit more in this area. Skins, maps, and weaponry have all been touched up to give the game a more distinct and realistic feeling. Granted, the graphics aren’t as good as most other top FPS games like Call of Duty and Battlefield, but it’s a small improvement nevertheless.

Aside from graphics, not much else has changed from the older games. The HUD (heads up display) is also slightly updated, but pretty standard. Weapons sounds have remained pretty standard from the last games. Overall, it’s not a big improvement or revolutionary. But the little changes do make a big difference.

No single player here to talk about. There is a type of tutorial weapons course lacking in the other games that can be useful for familiarizing a player with the weaponry, but for anyone who has experience with the FPS genre, this will be remedial and unnecessary. Players also have the option to play with offline bots again for the purpose of familiarizing with game play, mods, and maps, but otherwise providing little challenge. The game is, in the strictest sense of the term, a multiplayer game. But I’m sure most the people reading this already know what I’m talking about.

CS: GO is a multiplayer game, no question. The game consists of a few classic mods like hostage rescue and defusing a bomb, but has many other mods to offer. If you have never explored these mods in previous versions of CS, I highly suggest you do. There are a few particular mods I would mention as being noteworthy if you have never tried custom game mods in CS before.

Surf maps are usually pretty fun, them being more fun the better you are at surfing. Essentially, “surfing” is actually strafing into slanted flat surfaces. By maneuvering using only the A and D keys, you can gain momentum and travel fast and far. Usually the objective of the map is to kill the other team, but typically this is hard to do since it’s hard to catch people who are moving quickly and randomly. It takes a little time to get used to the concept of surfing. Once you have it down, it really becomes a lot more enjoyable.

Prison break maps are not for everyone, but can have their moments. Essentially, players take on the role of guards and prisoners (usually the prisoners outnumber the guards 3:1). Again, the objective is for each team to kill each other, but there are rules. Guards can’t just kill prisoners randomly. They can only do so if a prisoner is rebelling or trying to escape (aka not following orders). Guards gives prisoners tasks to do, directions to follow, and games to play until one final prisoner is left. The prisoner then can have a last request with any guards still remaining. Potentially, the last prisoner can kill all the guards, but he would have to be lucky and skilled to do so. The prisoners just try to rebel and escape when they can for the most part. I know, it doesn’t sound like that great of a mod since players willfully allow themselves to be commanded around, but if you know what you are doing as a prisoner and as long as the guards follow the rules, it can be quite fun.

There are two popular zombie mods in CS. The first is just plain survival zombie mod. In it, you are placed in a map where you must find areas where you can barricade yourself in and survive for the entire round. Once killed, you then become a zombie and have to assist in getting all the humans. Simple and straight forward, it’s the lesser fun zombie mod. Zombie escape is much more entertaining and challenging. Maps are designed for players to get from point A to point B (B being a rescue or survival point). Humans have to hold various points and use timing and coordinated fire/reloading to hold off the zombies. Often, the challenge with these maps is making sure no one screws up. If one human screws up and is knifed, he instantly becomes a zombie ready to infect the rest of the humans immediately. It’s important that people shout out orders and directions in order to win a map. Usually the escapes are simple and straight forward, but because of people not being careful, they are made much more challenging. Zombie escape is probably my favorite mod of all the custom mods out there.

One of the most popular custom mods is GunGame, where players must kill the other team, but can only get a better weapon by killing a player with the one they have. Usually, the weapon becomes less powerful or harder to use, progressing from a fully automatic machine gun to winning a match with a knife kill. An added bonus of GunGame is forcing yourself to practice using all the weapons available and making headshot kills as opposed to body shot kills.

Of course, there are quite a few more mods out there than what I have listed, but these are the most popular and fun ones that I have found. Minigame servers have many maps to choose from, many of which are fun and entertaining. Death run servers challenge players to outwit an opponent with many traps at their disposable. All that said, there are many fun mods to player beyond just the classic ones available. Most players never find these gems in Counter Strike games, but now that you know, I highly recommend you go check them out. But let me just warn you…I’m not responsible if you become addicted to these extremely fun game modes. You have been warned.

Why you should buy it

While not the most graphically pleasing or advanced FPS on the gaming scene, CS: GO is certainly worth a mention and considering buying. For one thing, it’s only $15. It’s rare when any new game of similar caliber comes out at a price like that. It’s definitely worth the price even if you decide not to play it that much.  The game play is just as good as CS: S if not better for those of you still playing Source. At the time of writing this article, it’s still buggy at times, but it should be getting patches soon enough to remedy any problems with the mechanics. If you are playing the main modes and maps, you won’t have any problems. Custom maps and modes are where most these problems exist. In my view, it’s a good solid FPS for the price you pay. There’s a good online following and you won’t run out of enjoyment if FPS is your thing.