Cheetah, Puma, Jaguar, Panther, Tiger, Leopard, Snow Leopard, Lion, and Mountain Lion. Here we are again a year later, discussing the big cats of OS X. For a refresher I invite you to read last years edition to get a background of where we were with Lion and ultimately what OS X has grown into. As has been the pattern since Leopard, a major OS release happens with the generic cat (Leopard and Lion) and then the next version of the OS to ship is the refined version (Snow Leopard and Mountain Lion). Today I want to talk about some of the refinements that Mountain Lion brings and the current path that OS X will take.

First of all Mountain Lion is geared towards all Mac users. The upgrade price is a small $20. This sends two messages, the first one being sent to Microsoft, lower your upgrade prices (they did). The second message is a bit more subtle telling all users to upgrade because Mountain Lion has features that all users ought to get accustomed to because in OS X 10.9 those features will be more prevalent. This has happened with OS X before when Apple slowly phased out PowerPC virtualization and starting in Snow Leopard with the OS taking more cues from the mobile iOS. There’s no reason not to upgrade, if you’re a Mac owner go right ahead.

When Lion came out I actually had some features that I could talk about in detail but I can’t really do that this time. Most everything is a refinement on what Lion provided. There are a few new things such as desktop versions of Messages, Notes, and Reminders. There are smaller things like the hideous Snow Leopard and Lion App Store window being made into a native window, full screen applications using the screen they were activated or the new more round plain dock. There are some changes for the better made to the kernel that will improve security as well. Casual users are not likely to notice these small changes and Messages, Notes, and Reminders could’ve been released for Lion.

There are three new features in Mountain Lion that provide a great picture of where OS X is heading in the future. These features are the Notification Centre, Gatekeeper, and iCloud. Notification centre provides a native solution for keeping track of calendar alerts, new mail, messages, Twitter mentions, and anything else developers decide to use it for. Gatekeeper is a new security model that aims to stop malware before it gets onto the system by locking down where applications can be installed from. Finally iCloud has a central place in applications like TextEdit or Preview allowing users to save directly to a file system in the cloud.

Gatekeeper is a new form of malware prevention. Right now in order to make a change to your system you must enter your username and password. This is good but often it’s not enough if an application itself contains malware. Gatekeeper allows the system administrator to choose where applications may be installed from. The choices available are: Mac App Store, Mac App Store and identified developers, or anywhere. The default option for Gatekeeper is the mid-road option, Mac App Store and identified developers. By choosing the middle of the road option Apple is still enabling users to install applications in a traditional sense but they are also providing a stronger security model that will hopefully protect OS X as it gains a larger market share.

iCloud made its debut last year with iOS 5. Lion featured some iCloud integration but not to the degree that we see in Mountain Lion. Applications are encouraged to use iCloud for preference synchronization and document storage. Mountain Lion also brings the ability to save and load files from iCloud directly on a per-application basis. 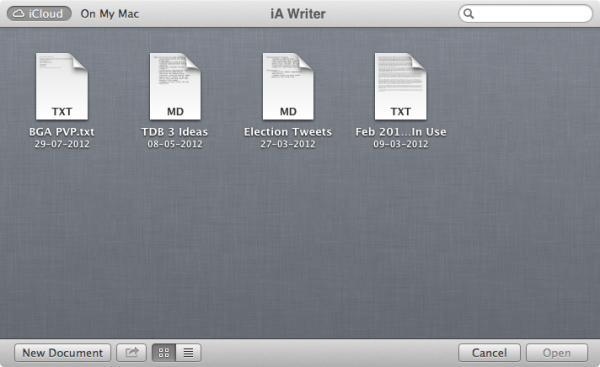 This creates some confusion in terms of whether or not the open dialog is actually now an iCloud file browser rather than just a means to open files. iCloud fits into the greater OS X strategy of enabling users to forget that they’re using a desktop or laptop and just focus purely on the applications. Overall the changes to iCloud in Mountain Lion bring iCloud to a level where it is usable and is appealing to use if you’ve got other Macs or iOS devices that have the same applications.

Overall I’m impressed with Mountain Lion. It’s not an upgrade that will knock your socks off, it’s incremental and rightly so. Apple is heading in the direction of slowly changing what we know as a desktop computer. Notification centre enables a user friendly top down view of what each application wants from you. Gatekeeper will keep you safe by limiting where applications can be installed from. And iCloud will enable seamless transition from Mac to Mac or Mac to iOS. A year ago I said we might not know what 10.8 looks like, now I think it’s safe to say that we know that 10.9 will complete the unification of OS X and iOS. This unification won’t result in using iOS on your iMac. It will result in a seamless experience between OS X and iOS with a user interface tuned to each platform. Apple is taking a very conservative approach given their history and it makes sense. Perhaps Apple has taken note of the negative perception of Windows 8.