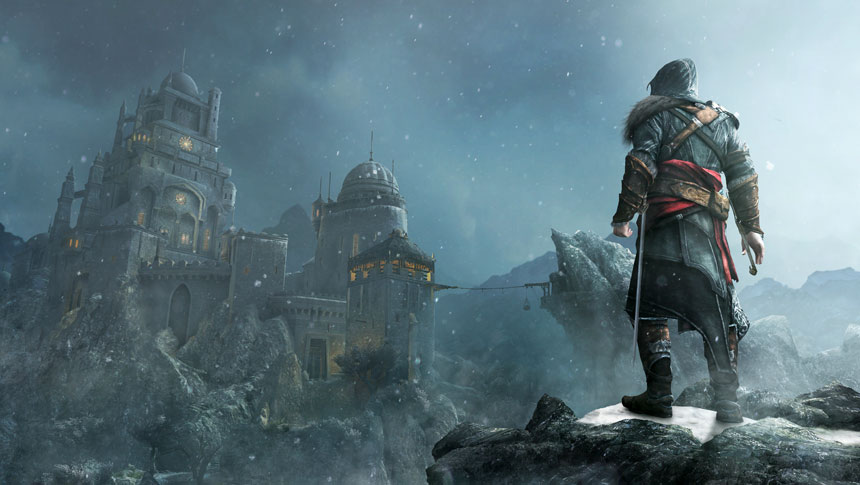 After being away from home for two months, I finally got some quality play time this past week. I put my nose to the grindstone and, 26.3 hours later (according to Steam), I beat Assassin’s Creed Revelations, the fourth game in the Assassin’s Creed franchise. Granted, I probably put in more time than I needed to actually get through the main storyline, but I like achieving 100% synchronization whenever I play. Anyway, the Assassin’s Creed series is far and away the best gaming series I’ve ever played. I won’t say it’s better than other games in the Action/Adventure genre, but it certainly ranks high amongst them. With the continuation of a great storyline and some minor improvements to the game play, Assassin’s Creed Revelations far exceeds the reputation of its predecessors.

Assassin’s Creed Revelations continues the story of Desmond Miles, a New York bartender with some personal history and ancestral heritage in the Assassin Order. Desmond is left in a coma after the end of the last game, Assassin’s Creed Brotherhood, leaving gamers wondering what will happen next. At the start of this game, Desmond meets Subject Sixteen, a recurring character in the series inside the Animus. Sixteen tells Desmond that he, like himself, is trapped in the Animus in the base programming. Desmond’s previous usage of the Animus to relive his ancestors’ lives has left his mind in an unstable state. The only way Desmond can escape the Animus and restore his mind to his body is to find a sync nexus, which will split up all of Desmond’s memories and return Desmond back to his body.

The rest of the game revolves around Desmond once again reliving the memories of his ancestors, namely Ezio Auditore from Assassin’s Creed 2 and Brotherhood, but also a few memories from Altaïr Ibn-La’Ahad from the first Assassin’s Creed game. Ezio, now Mentor of the Order, is seeking to finish the work of his father in researching the history behind the Order. He goes to Masyaf, the former fortress of the Assassins to uncover what Altaïr left behind. Unfortunately, Ezio runs into Templars who have already been searching the fortress for a hidden vault. After killing the head templar and retrieving Marco Polo’s journal (yes, the one and the same famous explorer), Ezio goes to Constantinople to find five keys needed to unlock the vault below Masyaf.

When he arrives, Ezio finds the Assassins have established themselves in Constantinople and fight the Templars, known also as the Byzantines, to keep the sultan in power. As in the last game, Ezio helps to rebuild the Order in the city while he carries on with his main objective of finding the five keys, one of which has already been found by the Templars. With the help of a Venetian female bookstore owner, Ezio seeks out rare books hidden by Marco Polo to reveal the location of the keys. Upon finding each key, Ezio and Desmond relive a memory of Altaïr sealed in the key. Once in possession of all the keys, Ezio returns to Masyaf to discover what lays hidden in the secret vault below the fortress.

That’s as good a summary as I can give for the game. I’ve left the ending out as a cliffhanger for those of you still interested. Needless to say, the story is quite good and provides for a much more interesting gaming experience. I found it has quite a few parallels with the Matrix in how Desmond fits into everything, but other than that, it is very original. And it’s well worth it to pay attention to every cut scene as things are not always what they appear to be.

One thing that can drive some people nuts about Assassin’s Creed is that the overall game play doesn’t change a lot from game to game. I will admit this is true to some degree. You are still going to do a lot of running around, climbing, fighting, and completing missions. But there are some changes. With Revelations as with every new installment in the series, the AI gets a little smarter in combat, you gain more attack and combo moves while fighting, and you gain a few new ways to kill people, too. Ubisoft doesn’t change much from the formula with this game.

The AI is much quicker from the previous games, responding to attack moves much more readily and counter-actively than before. More often now when fighting multiple targets, you have to be ready in case while killing one opponent another attacks you from behind or from the side. A few new attack moves, counter moves, and slow motion moments have been thrown in to make fights more interesting. One of the nicer improvements to the game in regards to combat is a separate weapon wheel for choosing a secondary weapon pictured below. 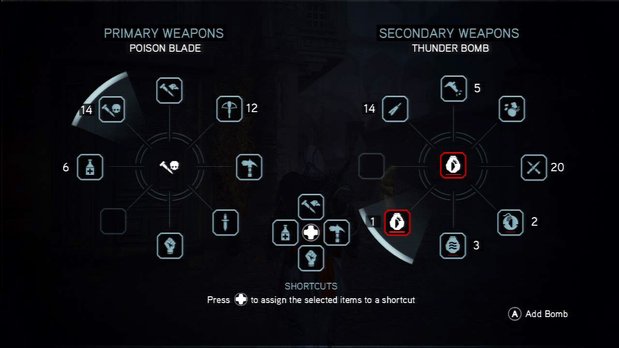 Now, you aren’t limited to using your pistol with the sword or your knives with the dagger. You can mix and match what weapons you want to use for any given situation. Without going into too much detail about this, I will say that using the crossbow and pistol or knives make for an overpowered range combination. One thing also is that you can select what primary and secondary weapons you want on your quick selection weapon pictured between two. Rather than going to the wheel selection for every occasion, you can pick your favourite weapons and put them in the quick selection wheel for ready use. While this and the other improvements don’t seem like much, they are a long time coming and make the game immensely better for people who have played each game in the series.

Bombs have also been introduced to the game, and this is probably one of the most useful tools introduced in the entire series. Bombs come in many different forms and with varied purposes. To begin with, shells can explode on impact, timed with a fuse, be planted on the ground like a mine, or be stuck to a target or wall. The area of effect can be changed from one individual to a large area. The effects are really where bombs become effective. Bombs can kill, distract, disorient, impede, confuse, and so much more. You craft them yourself and can make whatever you need for any given situation. With the wide assortment of effects, you ultimately have new ways to kill guards or sneak pass without being noticed. At first I wasn’t sure how well bombs would work out, but they ended up being one of the best weapon/tools in the game.

A strange change to the game was the add-in of tower defence. In Constantinople as in Rome, you control dens throughout the city. Unlike in Rome, though, being notorious can lead to your dens coming under attack. When this happens, you can go to the den and fight back against the Templars in a tower defence game. You command and control the placement of your Assassins as you fight back waves of Templars and eventually win, earning a bonus for how well you defended. It seems a little out of place, but nevertheless adds a new component to make the game more interesting.

With a game like this, players don’t expect game play to change much. Less change can be a bit of a drawback. In that case, it’s dependent on the developer to come up with a good storyline and as many little improvements as possible. Making what little fixes they can in game play helps, but it’s certainly not the make or break feature of the game.

I tried my hand a little at the multiplayer, but it takes time to become familiar with it and good at it. Just as in the regular game, the multiplayer consists of tracking and killing targets as discreetly as possible. Unlike the single player, you are also being pursued while you track. Though being discreet is key, the best players are quick and efficient at killing while being discreet. New players find themselves lost and confused as they try to find their target while veterans track them. It’s a good concept and can be fun, but it’s difficult to master. Still, it’s worth at least a try if you get the game. It’s at least more tactical than point and shoot or spray and pray.

Overall, Assassin’s Creed Revelations is a fantastic game. It continues to improve where the previous games fell short, namely in customizing what weapons you can use and making fights more difficult rather than boring and uninteresting. While the changes are few, they improve what little things needed to be improved. The storyline continues to be well thought out and constructed. It keeps the gamer engrossed in what’s actually happening as opposed from going objective to objective, not caring what happens in-between. The multiplayer continues to add replayability value to an otherwise non-replayable singleplayer game. The game is definitely the best in the series so far and well worth $50.

One word of warning, though…Ezio doesn’t wear a cape for most the time unlike the other games. So for all you cape lovers out there, this may not be the game for you. If you can get over that part, it’s a great game through and through.