Healthcare At a Glance

This guest article comes from Trekkie on the forums. We hope you enjoy his contribution. You can find out how to write your own guest article here.

On March 23, 2010, the United States Congress passed a law that will affect every American citizen for the rest of his or her life. The bill was known as the Affordable Care Act, more commonly known as Health Care Reform. This was President Obama’s vision of creating a new universal healthcare system for the United States and it is already having an impact on people everywhere, from those who were just born, to the very old. But, what is in the Affordable Care Act and how does this new law affect you?

Created by Chancellor Otto von Bismarck of Germany, this system relies on having a mix of private and public hospitals to treat their citizens. A percentage of everybody’s payroll goes to their insurance company of their choosing. However, these are nonprofit companies regulated by the government. If a family has a much higher income, they may switch to a for-profit company, which are often lower than their public option. But, if can be very hard to switch back if problems arise. To control cost, state representatives get together with doctors to set a plan to allocate resources that the state will pay for medical expenses. But, many times they will agree to increase out-of-pocket expenses than change the way medical care is provided. Countries that use this model include France, Germany, and Japan.

Created after World War 2 by Sir William Beveridge in Britain, citizens pay an income tax for health coverage, which provides coverage for all citizens. Cost for medical services are low compared to many other countries, by focusing on preventative care and patient’s involvement with their Primary Care Physicians. Almost all hospitals and clinic are owned by the government which also controls what the doctors do. However, because it is so regulated by the government, doctors are well protected from malpractice lawsuits, and choices for available treatment are often limited. Any new treatment often takes longer to implement in these countries than many others.

Countries that use this model include the United Kingdom, Sweden, Spain, and Italy.

The only country that uses this model is the United States. Insurance companies are privately owned, where citizens pay for their own insurance and level of coverage. It creates a very competitive market that forces companies to try and keep cost low to gain new customers. This model does allow for easier access to innovative ideas to cut costs and save lives. However, these companies are not controlled by the government and are profit driven. They can deny coverage to anybody that does not fit their criteria. There is no universal coverage and low or middle class citizens often pay more out-of-pocket than those with insurance and higher incomes. According to the OECD, the 16% of the U.S Gross Domestic Product (GDP) are for health expenditure compared to the OECD’s average of just under 10%. President Obama’s hope is to reduce our health expenditures, while provide coverage for every citizen in the country. 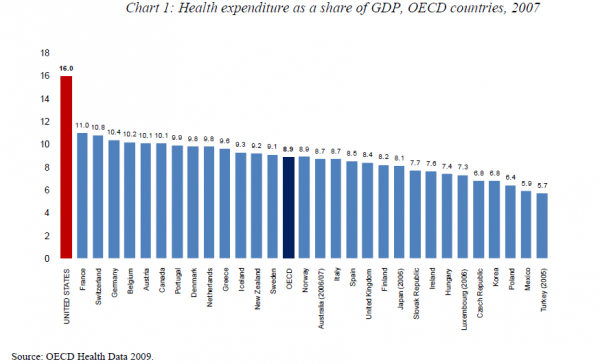 There are over 300 million people living in the United States, and it is estimated that over the next 10 years, the U.S will pay over 1 trillion (yes 1,000,000,000,000) dollars to finance this law. This will be a joint payment system, where income tax and business companies will fund the law. The major funding for this is from the money that would have gone into Medicare.  Businesses who are already paying for Medicare taxes, will be expected to pay more. Medicare is being restructured to pay for the Act, while protecting the senior population in the States. The second major source of income is from extra tax revenue from families who make over $200,000. It may also be prudent to comment that only American citizens are allowed to take part of the reform. Illegal immigrates will not be covered and cannot receive support from the health care bill.

On September 2010, all children can benefit from their parent’s insurance plan until they reach 26 years old or they have their own. Insurance companies cannot deny minors because of a pre-existing condition, and under the law, minors have free access to all preventative health screenings such as blood pressure, cancer screenings, flu shots, etc. By 2014, employers must provide all of the employees with health coverage, but those who may be struggling to afford coverage for their employees can request help from the government. Starting in 2015 insurance companies cannot deny anybody coverage regardless of age or health conditions. When many of you reading this are joining the workforce, you must have your own health insurance or you will be forced to pay a fine. If you become unemployed, or having trouble paying for insurance, starting 2014, you or your family may apply for Medicaid. Under Medicaid, the program will cover all or most expenses.

The idea behind the Affordable Care Act is to providing more preventative care for citizens so they have early detection. If they detect a problem, the person may have to pay $7,000 for cancer treatment and is covered by insurance. Rather than paying $25,000 out of pocket because, they are at the final stages because they had no insurance to seek treatment early on.

This is a very small amount of information about the Affordable care Act and more information is available on their website at http://www.healthcare.gov/index.html

This article is filed under Guest Articles, Real World. You can follow any responses to this entry through the RSS 2.0 feed. You can discuss this article on our forums.
Navigation