The State of Ubuntu 11.04 and Desktop Linux

Ubuntu 11.04 was different than its predecessors in that it changed the way the user interacts with the desktop. In previous releases Ubuntu would use the standard Gnome panel (bars that can be added to all sides of the desktop) and applet (controls and displays inside panels) system to build the desktop. Ubuntu 11.04 switched to Unity which originally made its debut in the netbook edition of Ubuntu. Bringing Unity over to the desktop edition of Ubuntu was done with the hope of providing simpler user experience. Overall the Unity desktop was the main new feature of Ubuntu 11.04.

Later we will be examining whether or not Unity achieved its goal of making the operating system easier to use. This will be examined both from the perspective of a new user and accounts from veteran Linux users of all varieties. First, we must highlight what motivations are to switch to Ubuntu.

The majority of those reading this will be Windows users. Windows has become the default operating system because of its ease of use and vast amount of software available. What if you’re upset with the way Windows is working for you? The best alternative for most Windows users would be to go out and buy a Mac. The second best choice is to give a couple of Linux distributions a try. In fact, trying a Linux distribution should be your first choice if you see yourself as a sophisticated user or you like tinkering with your computer. Another reason to try a Linux distribution might be because you do not want to pay the heavy price for a Windows license.

Every time a new version of Ubuntu is released I either install it in a virtual machine or on an actual computer. Playing around with the new Ubuntu versions is something that I feel obliged to do since Ubuntu is in a sector that could break Linux into the mainstream market. I class my primary computer use as web development which can be done on any platform. I currently use Mac OS X for my web development environment which works quite nicely. If I wanted to, I could switch my development environment to Ubuntu but it wouldn’t be all that pleasant compared to what I have access to on Mac OS X. With that being said, every six months I take a look at Ubuntu to see if it’s made any progress to being as user friendly as Mac OS X always has been.

Ubuntu 11.04 represents a good step towards the operating system being more like Mac OS X in its out of the box state. Ubuntu 11.04 was great in that it worked right out of the box with all my hardware and presented an easy way to install and interact with the installed software. The first hurdle that I experienced in Ubuntu 11.04 was that it’s not as user friendly as it could be to configure the system as it is on OS X or even Windows. An example of this is enabling and arranging a dual monitor setup. Granted dual monitors aren’t something everyone would use but both OS X and Windows do this easily. In Ubuntu if you have an Nvidia graphics card you must install another application to enable and arrange dual monitors. Once this is installed, it’s not apparent but the user must tell the application to make changes to a system file in order to have the changes persist over a system restart. The same not so apparent configuration aspect can be applied to desktop effects. Another issue with Ubuntu and Linux in general is the lack of easy to use software. 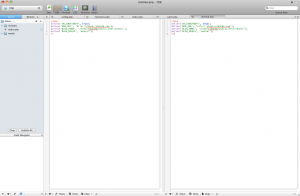 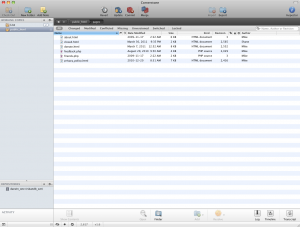 Presented above are three pieces of software that I use daily that I have not been able to find decent analogues for on Ubuntu.

In summary, Ubuntu does not work for me because any configuration aside from the default often takes time and the lack of user friendly easy to use software.

Brad (Chief Snake), a veteran user who has been using Ubuntu on and off for years, had stability problems with this release. The stability problems with Ubuntu 11.04 have also been reported elsewhere in the community. This makes Ubuntu 11.04 feel the same way Windows Vista felt to some early adopters. Stability problems aside the upgrade also did not go as smooth as it could have. A standard user switching from Windows or Mac OS X will not want to deal with the potential headaches of an upgrade. The discussion I’ve had with Brad and other Ubuntu users always comes down to the fact that the majority of the experience is fine and there are just tiny little annoyances that would ruin the experience. At the end of the day after much frustration with Ubuntu 11.04 Brad migrated to Linux Mint. Linux Mint includes much of the software a switcher would need by default (Flash, Sun Java, MP3 support). Linux Mint also has the same software available to it that Ubuntu has since it is based on Ubuntu. Former tech writer Paul (Pfkninenines) is also a fan of Linux Mint.

Now that we’ve discussed the veteran’s point of view I want to share a bit about the new user experience. For this article I had one of our Informer writers, Tim, use Ubuntu as much as he could for the month of May. Prior to this experiment Tim had not used a Linux distribution. For his day to day use prior to this experiment Tim used Windows for gaming and Mac OS X for school work and non-gaming matters. He was kind enough to share his thoughts about the entire process:

Switching to Ubuntu was a lot easier than I thought it would be. Now while it requires you to have some prior knowledge about operating systems and the knowledge can easily be found online. All of the screens for changing different parts of Ubuntu were things I’ve seen before in Windows 7 and OSX. One of the things I thought would get me is how to do things like homework, but that was easily covered. Writer, Calc and Impress were all programs that felt like Pages and Word, and allowed me to easily get started on papers I had to write, or presentations I needed to make. It also made talking to friends, and posting on things like Twitter or Facebook nice and simple, with just a few clicks to get it started up. It basically took over the job of my MacBook and Desktop, and the fact that it was simple really sold it for me.

Combining my experience, a veteran’s experience, and a new user’s experience we can quite accurately describe Ubuntu 11.04. Ubuntu 11.04 is an easy install for first time users and it provides applications users are familiar with. These applications combined with the new Unity desktop improve usability of the system. Once a new user installs Ubuntu 11.04 they will be able to run the operating system with relative ease unless advanced configuration is required. Finally, Ubuntu 11.04 was a rough release in terms of stability compared to past Ubuntu releases. This can happen especially with a major change to the operating system (Unity).

If you’re considering moving away from Windows or Mac OS X, Ubuntu 11.04 may work for you, and it might not. The only way to know for sure if your experience will be smooth is to give the operating system a try. If it doesn’t work, the first alternative you may want to try is Linux Mint. As mentioned above Linux Mint is basically the collection of Ubuntu software with full proprietary multimedia support out of the box. Fedora is another Linux distribution that is worth trying out. Fedora is not as simple to use as Ubuntu but it is a solid distribution. Finally, if your hardware is compatible you may want to install Mac OS X on your computer.

With Ubuntu 11.04 released back in April and both Apple and Microsoft having announced new versions of their operating systems, we must ask the question: what does Ubuntu 11.04 mean for the future of Linux on the desktop? For any version of Linux to be successful on the desktop it must have strong hardware support, make it easy for users to transition, and provide usable software for everyone. Through our three types of users we can see that two of three of these are satisfied, they are the hardware support and ease of transition. With Mac OS Lion and Windows 8 on the way, the Ubuntu operating system must advance quickly to ensure that the operating system is seamless for those transitioning. With this, the operating system itself must foster an environment that encourages developers to make the kind of applications that we see on Mac OS X. If this does not happen, Linux on the desktop for casual users will remain the same as it always has been, limited to enthusiasts and those who like tinkering with their system.