Continuing on the downward trend, Guthan’s warspear dropped 113k this week. The entire set (below) itself climbed up about 100k, but had dropped down 82k by the end of the week. 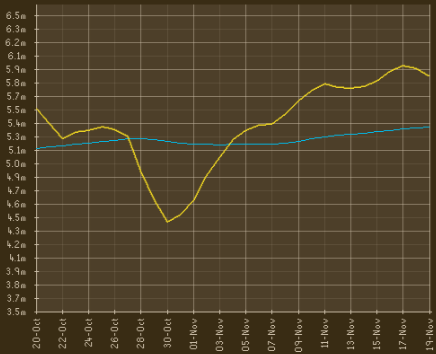 At the start of the month, Infinity Boots began to drop. They dropped a whopping 263k during the week, and I believe they will continue. I do not suggest buying the Infinity Boots at the moment, but other items in the Infinity Set are climbing, such as the top. If buying the set, be careful as to what might happen to the price to Infinity. The Zamorakian Spear dropped 627k during the week. It looks as though it is beginning to bottom out, and but could possibly drop even more than it has. 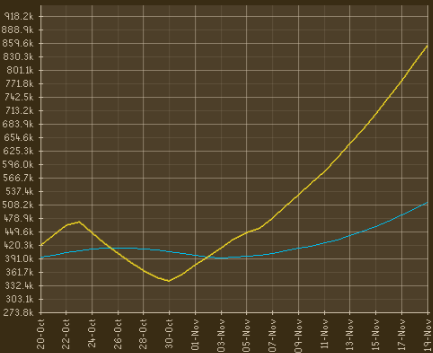 Other Item Drops and Increases-

I would not suggest buying a Saradomin Sword in the near future, as it dropped at the end of October, rose again, and now seems to be falling back down under 10m. One of the biggest economic stories this week is the Nature Rune price dropping. If these commonly used runes drop in price enough, then alching could once again become profitable. It might not become profitable, because the price of Yew and Magic longbows are slowly increasing. Magic longbows stopped dropping, and Yew Longbows increased 25gp towards the end of the week. It may not be much, but there is a good chance that they will go up more.

That is all for this week. Hope you enjoyed this new weekly segment about the Runescape Economy.

Again, any questions or suggestions please send me a PM on the forums, or leave a comment here.

This article is filed under Economy, Runescape. You can follow any responses to this entry through the RSS 2.0 feed. Both comments and pings are currently closed.