There may be hope for the videogame franchise yet. Judging by the way Fable II played out, I think developers may have finally got it. You don’t need to reinvent the wheel to have a good game. Fable II’s story has many parallels to the first: you have no parents, your sister has been killed, the Heroes Guild has taken you in and now you must save Albion from the evil clichéd character trying for world domination. Even parts of the game, such as the Crucible or the Spire, are very reminiscent of the Arena and prison from Fable. But Fable II proves that words like “revolutionary” don’t need to rule how developers make games. And so, fresh out of my brutal divorce in Bowerstone, the terrible custody battle with my prostitute wife in Westcliff, and my jail time for public indecency in Oakfield, I give you Fable II. 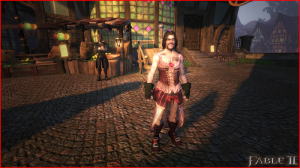 The story in Fable II is probably its weakest point. It has a very straightforward storyline, with no twists or turns, just one main goal. The evil villain Lucien is trying to gather the four Heroes in order to harness their power and essentially, rule the world. The protagonist is very clichéd, with his motives, which are rather dull anyway, only being revealed at the very end of the game. Normally I’d be upset over the lack of real story, but Fable’s goal is for you to create your own story, instead of simply taking part in one. The fact that I have a choice for everything leading up to and including the end result immerses the player into something that may have not been there if no choice was involved. For example, I definitely wouldn’t have cared about Reaver, the Hero of Skill’s, actions towards another particular character if I didn’t have the choice to interact with said character earlier in the game. So while there may not be a grand story to be told, the choices you make and the actions you perform give you the ability to make it grand if you want. 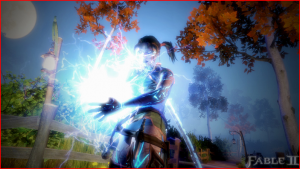 Once again, not one of Fable II’s strongest aspects. During my playthrough, I encountered countless glitches, sound lag (which I put with graphics since it’s mostly due to animation synching), and bugs. Instances such as my dog getting stuck in fences, or when I fell through the floor in my home, get annoying very fast, especially when you have to reset your system because of it. While the overall graphics are decent, they are very much the same as the first Fable’s graphics. Character models and environments still have the exact same look, which is nostalgic, but nothing eye opening. I’m sure the majority of the Fable II players can remember the first time they saw the Spire… it was depressing. Now, I’m not saying that the graphics are horrible, because they aren’t. They just aren’t up to par with other games I’ve recently played on the 360. Another problem I have, and I’m not sure if I’m the only one who has this problem, but my eyes get extremely sore while playing for a few hours. The blurring and shining effects really give my eyes a beating. The one thing that I didn’t expect was FMV’s. There are about four FMV’s throughout the game (not counting the narrated art scenes) that are just beautiful to watch. I’ve only seen one other 360 game with FMV’s, so it’s great to see another game incorporate them. 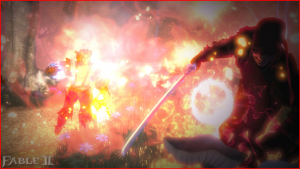 I didn’t mean for this to happen, but the game seems really bad so far. But here we are, at the saving grace for the entire game: gameplay. Fable II plays identically to its predecessor, which is the best thing Lionhead could have done. Not only do previous players feel right at home, but new players are eased right into the simple yet addictive gameplay. Basically the game is comprised of different quests that you choose to accept if you wish. Often times there will be two sides to one quest, the good side and the evil side. Which side you play out is entirely up to you. The quests have their own stories, sometimes having a plot even better than the main quest. One of the most memorable sidequests, for me, involves a cross-dressing, overweight man luring me to his home (a cave) to get eaten by a bunch of Hobbes. Combat is very simple, with three different styles: Strength, Will, and Skill. If you favour melee combat, with swords, maces, and axes, you’ll want to spend your experience on physique and toughness, while if you’re more into crossbows, pistols, and rifles, you’ll find yourself investing in accuracy and speed. The experience system is really great, rewarding you with general experience orbs (which can be spent on any of the three styles) and orbs based on what style you used to kill an enemy. So if you use spells to kill enemies, you will obtain Will orbs and General orbs. This helps you gain experience in the skill you prefer, rather than useless skills you’ll never use. Along with the fun combat and leveling system, the character customization is pretty well put together. There is a shortage on different clothes right now, but DLC can always fix that. After buying the clothes you want (there is no armour), you can also buy a vast variety of dyes to change the colour of your outfit. So although you may find someone with the same clothes as you while playing co-op, it is very unlikely you’ll find someone with the exact same outfit and colours. This also gives the game amazing replayability and a unique experience for every player. 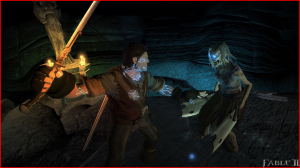 Contrary to popular belief, the online and co-op features are actually very well put together. You may hear some complaints about the camera movement and the lack of the guest’s character, but it still grasps the concept of a good multiplayer. When someone wants to join your game, you can choose how much experience and gold they will get. You can set the bar to 50-50, but if you’re hosting, why should they get half the rewards? Or maybe you want to help out someone less experienced, you can give them 75% and only take 25% for yourself. Now the guest chooses a premade character to play as, while they still retain all their skills and experience from their real character. Future DLC or patches could make it so that guests could import their character, but for now you you’re stuck with premade ones. You can now do quests together, raid villages, or just go play some pub games. In the game menu there is an option to view all online orbs. This allows you to see the little floating orbs that represent other players on Xbox Live. Orbs can talk, interact with eachother by sending gifts, and view eachother’s stats. It really feels like a MMORPG, with a lack of actual characters walking around. It’s really cool that if you’re stuck on a quest or at a certain part, you can often find someone else in the area doing the quest, and ask for assistance. As of now there are some hotspots already being introduced. The Shooting Range in Westcliff is a gathering spot for trading dolls and legendary weapons, and Bowerstone Market is filled with people selling items and discussing strategies. I’m really hoping that future DLC will keep people playing online for a long time to come, because we all know what happens to online games that aren’t updated.

So while Fable II might be an exact replica of the first, it’s still a really fun game. If you’re looking for a fun, not too serious game to play, Fable II is definitely the one to go for. You might as well try it out, there’s still a few days till Gears…