Cloud computing is the future. But before we get to swept away with what’s coming in the next few years, lets take a look and see what it actually is. First off let me start by asking you, have you used a cloud computing application? Well the answer is yes, at least for the majority of you. Anytime you go to your favourite email provider such as GMail, Windows Live Mail, or Yahoo you are computing in the cloud. Email is the best way to describe cloud computing. When you go to gmail.com and check your email you aren’t really doing anything on your computer, you just use the web browser. With cloud computing everything is done on the server up in the cloud. In effect cloud computing has no dependency on whether you are at home on your standard computer, at a friends house, or at school. Cloud computing allows us to work from anywhere on a variety of things, one of which being email. More and more are surfacing every month. For a more complete definition and some history behind cloud computing check out the Wikipedia article on Cloud Computing.

Cloud computing started to pick up in late 2007 and gained more traction in 2008. Right now there are 3 primary key players, Google, Apple, and Microsoft. I have listed these three companies in the order I believe they would be able to deliver a successful cloud product. first being the most likely to succeed. There are others such as Amazon and Yahoo that play a key role in the landscape. We should also not forget the entrepreneurs, the people who are forward thinking that will come up with the innovative applications in the next few years. Lets now take a look at the current cloud computing stage.

As mentioned above there are three major players right now, Google, Apple, and Microsoft. Google’s first cloud computing adventure was GMail in April 2004. GMail originally started out as any other web based email service but has since grown into a full fledged cloud based service. Google’s second service in the cloud computing domain is Google Docs. Google Docs originally started as two acquired services, Writely and Spreadsheets. A presentation utility was later added. Third and maybe most interesting is Google App Engine. Google App Engine enables developers to build applications and use Google’s resources to host them. You can find out more about he Google App Engine here and browse some of the applications that have already been created. Google also has a utility called Google Gears which is an extension for your browser that enables you to run web applications offline. For example with Gears you can use Google Docs offline. It doesn’t just work for Google services, it can be enabled for other web applications that are not Google based. As you can see Google has made impressive inroads into the cloud computing domain.

Apple’s solution to cloud computing is a hybrid based service, relying on your other devices for the full effect. Apple’s service is named MobileMe. MobileMe is a rebrand and enhanced version of .Mac which was the precursor of MobileMe up until July 2008. .Mac was not as friendly to PC’s whereas the aim of MobileMe is for it to be able to work with any computer or device. MobileMe also received it’s fair share of controversy including admittance of this by Apple CEO Steve Jobs. Apple has also lost a small fraction of email messages sent by users of the service. Apple’s vision for MobileMe end users was for them to have a seamless experience moving between computers and devices all the while being able to access their data via a web interface. MobileMe includes 20GB of storage, a mail application, address book and calendar, photo gallery, and personal website space. All of these were originally available in .Mac except for the enhanced web interfaces. During the MobileMe roll out Apple was able to release a service that didn’t work properly and all of the tasks you were supposed to be able to do with it could easily be accomplished with Google services. Aside from MobileMe I am also going to mention SproutCore. SproutCore is a framework that was released in 2007 that allows developers to create applications that look like Mac OS applications on the web with Javascript. SproutCore was used to build most of MobileMe, it should also be noted that in 2008 Apple has contributed to building SproutCore. It’s safe to say that even with Sprout Core, Apple would not win if we had to pick a winner on the cloud computing scene today.

Finally I think it’s fair that we take a look at what Microsoft has in the works for cloud computing initiatives. For a start Microsoft has always had Hotmail, which is now known as Live Mail. Right now Microsoft has two main cloud computing initiatives that are in their early stages, Mesh and Windows Live Skydrive. Mesh allows you to set up synchronization with a folder on your desktop via the extension for Windows XP or Vista. They do have a Mac and mobile version in the works. Basically this is exactly as one would think. You create a folder somewhere on your computer then you have the ability to sync this up into the cloud. Mesh comes with 5GB of storage presently, I can imagine that it will be increased by the time it is ready to launch. Mesh also has a desktop view which lets you view what folders you are syncing to. 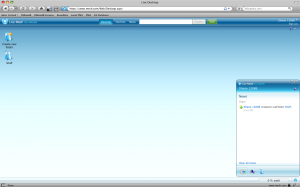 You also get this neat little turnstile type of device that lets you see what devices are connected and add a device. 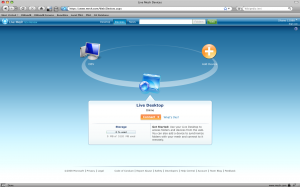 Finally, Skydrive is simply just a place for you to upload files to the web. You can set folders to be public, private, or give access to certain contacts on your Live contact list. From here it acts pretty much as a file store for hosting personal files, there is really not much else to Windows SkyDrive at this point. I know it may not look like much now but this is the direction that Microsoft will be going with future version of Windows. They won’t be completely cloud based but the cloud will play an important part of them. Microsoft’s core b business is operating systems, so it’s safe to say that the standard version of Windows that we all know isn’t going anywhere anytime soon. But we will start to see Microsoft’s operating systems as a conduit for accessing cloud based services. I have not written Microsoft off yet for coming back and winning the cloud computing battle. All we need to do is take a look back in history and look at what radical changes happened with Windows 95 and Internet Explorer. I also believe it’s in the core vision of Microsoft to pursue cloud computing because in a nutshell Bill Gate’s vision was for a computer to be in everyone’s living room, office, den, or bedroom. They have succeeded at that so why stop now?

As I mentioned at the start of the article, Google, Apple, and Microsoft are the key players in this space but now I am going to take a look at a few interesting smaller services, first off being Yahoo. Yahoo isn’t in a position to compete with Google for this space as their business parallels Google’s too much. We should also not forget the whole Microhoo thing that happened earlier this year when Microsoft tried to buy Yahoo. Next is Amazon with their S3 service. For anyone who does not know, S3 allows you to purchase cheap space and bandwidth. You can use the space and bandwidth for whatever you want ranging from starting your own web service to backing up personal files. This is invaluable for if you need somewhere to store offsite backups for your computer, just to give you an idea of how cheap it is we have been using it for backups on the RSBandB server and we have been using it for 2 months already and the charge has been less than $5 a month both times. We aren’t uploading a small amount of data, it’s upwards of 3.5GB. Finally there’s a neat little presentation web application created by some ex-apple employees called 280Slides. For anyone who has used Apple’s Keynote before you will feel that 280Slides is very similar to Keynote. While these are only a few of the standalone web services I am sure there are many more great ones out there being created right now.

Finally in closing I’d like to just sum up my beliefs on this topic. In a nutshell I believe presently Google has the best answers to cloud computing. They have been doing what Microsoft and Apple have been trying to do for at least a year now. I’m not ruling out Apple or Microsoft for making a come back and eventually developing something better than Google but right now Google is the clear winner. Another thing that contributes to Google’s ability to deliver where the others can not is that they offer tools for developers to get started easily on cloud projects. If you have not tried any of Google’s services I recommend that you take a tour of one of the mentioned ones and find out what you think.

Are you ready to move to the cloud?