Recommended MMORPG has finally come out of its hiatus!  This month’s MMORPG is one I’ve been raving about for awhile on my blog:

Basics of Shooting – The reason I got so addicted to Gunbound was because the gameplay was so unique and different from any other MMO I had played before.  If you’ve played any sort of aiming-type game, you’ll realize Gunbound is very similar to them.  The basis of this game is simple – try to eliminate the other players on the team by shooting them.  However, this isn’t an FPS/TPS/RTS game.  What you use to shoot your enemies with are called Mobiles.  There are many different kinds of mobiles, each with their own unique shots.  You’ll have to learn to use these shots efficiently to wipe out others on the map.  Each mobile comes with a Shot 1 and a Shot 2.  Shot 2 is usually the stronger shot, while Shot 1 is easier to control and can be more accurate.  After a certain amount of turns, the option for a Super Shot will be enabled.  The Super Shot is the special of your mobile, and it can deal a great amount of damage if it is aimed and fired right onto the target.  However, miss even ever so slightly and your chance of that great damage will be gone. 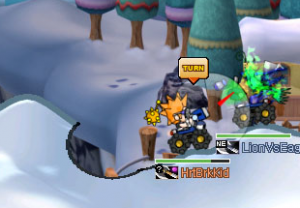 Controlling your Character – In Gunbound, there are three commands you use to control your unit – moving, aiming, and firing.  Moving is controlled by the left and right arrows.  Aiming is controlled using the up and down arrows to get a good angle.  Firing is controlled by the space bar.  The longer you press it down for, the more power your shot will get.  You must incorporate both the angle and the power in order to get a good shot.  That’s not all though – you must also take in the wind speed and direction.  At the top of the game screen there is a circle with an arrow and a number – this is the wind speed/direction.  The higher the number is, the strong the wind is, and the arrow is the direction in which the wind is blowing.  If used correctly, the wind speed may add to your advantage, or it may just prove to be a disadvantage.  Wind speed/direction will change every few turns, so don’t get too comfortable.

Items – Items are also usable in Gunbound.  There are many different items you can equip before the battle starts, some including double shots, teleports, heals, wind change, and lightning strikes.  The master of the battle will be able to enable/disable these items at their will, but if some are enabled, it is best to equip them and use them to your advantage.  One of the most commonly used items is the dual shot, which allows you to shoot two shots instead of the usual one.   Before setting yourself as ready, make sure you equip a couple dual shots (if it’s allowed).  To use an item in battle, double click it.

There are also items called second items that will affect players.  For example, there are second items that can prevent you from getting damaged, prevent opponents from using items, etc.  These items must be bought from the shop (although four are given to you after you finish the tutorial).  They also only have a set amount of uses.

Types of Battles – There are five types of battles in Gunbound – Deathmatch, Team Deathmatch, Tag, Powerball and Jewel.  Deathmatch and Team Deathmatch are self-explanatory.  A Tag battle is when you are allowed to have two mobiles – your main mobile and a tag mobile.  If your main mobile is running low on health, you can tag to your other mobile (which usually has around half to all of its health if you didn’t tag already).  However, once you die in a Tag game you’re out for the round, unlike Deathmatch and Team Deathmatch.  That doesn’t mean you can’t do anything though – there will be a little slot machine running, and if you get three in a row of an item, you may pick a spot on the map to drop it on your enemies or help out your teammates.  A Jewel battle are when little “jewels” (called Raons) will drop from the sky, each one having a number on them.  You must try to destroy the jewels and get 100 points before everyone else.  The higher number the jewel has, the harder it will be to destroy.  To get a 5 you need to hit 100+ damage, for a 10 200+, and for a 25 300+.  There are also -5’s that will drop, so make sure you don’t hit those.    A Powerball battle is where you collect different powerups until you can use your super shot.  Then you use the super shot on an opponent and try to defeat them before they defeat you.

There are also many different battle locations.  The location can be switched by the battle master.  Each one is different and provides advantages and disadvantages to certain mobiles, so try to pick a mobile that will best suit the battle location.  Each location only has so much land that you can stay on.  If attacks miss you, your surroundings will get blown apart a little wherever the attack hits.  If you fall off the land, you are automatically killed. 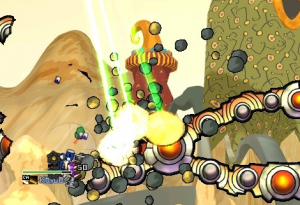 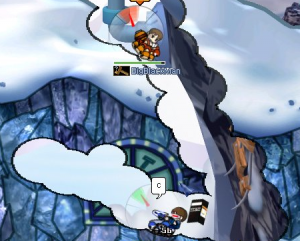 Rewards and Rank – Every time you manage a good shot or defeat an opponent, you will get some gold.  If you are on the winning team of a battle, you will get gold as well as GP.  You can use gold in the avatar shop to buy accessories for your Gunbound character.  These accessories can also affect the stats of your mobile.  GP is used to increase your rank.  Your rank starts out as a newbie (icon: a little yellow chicken) and as it increases, your little icon will change.  Try not to lose that many battles so that you can keep getting more GP to increase your rank.

Types of Mobiles – There are eighteen different types of mobiles in Gunbound, each one with a different attack style.  If you choose the random mobile, a random one will be picked for you once you start the battle.  There are two mobiles that you can only get from a random: the Dragon and the Knight’s Stallion.  Both of these have phenomenal attacks, but their defenses are only average.  Here are a few of the mobiles you can get and a basic description of their attacks.

Laser – Attacks using laser beams directed from a satellite hovering above.
Frog – Attacks using pieces of goo that will roll on the ground for a certain length before exploding.
Boomer – Attacks using boomerang-like discs.  Rather hard to control – utilizes the wind a lot.
Nak – Attacks from a nak can go underground
Raon Launcher – Can attack using little clones of itself, which will walk around until they hit a target and deal a good amount of damage
Kalsiddon  – Attacks utilize the wind in order to shoot rockets in a parabolic pattern towards the opponent
Lightning – Attacks using lightning that will strike from the sky

–
I personally love Gunbound.  I’ve played it for awhile now and I love the uniqueness of this game.  It takes a simple type of gameplay and transforms it into a creative shooting game.  The graphics may look a little kiddy-like, but the gameplay makes up for it.  If you’re into strategy games, you should definitely take a look at Gunbound!