Ah Runescape, a world full of dungeons and dragons and skills and quests, from what I heard anyway.  I wasn’t too sure about these remarks from others, and some I felt might be a little facetious (killing a three headed dragon at level three?  Very doubtful).  However, curiosity overtook me, so I decided to delve into Runescape to see for myself what it was like.

My name is Tioness, once a regular old person and now the newest addition to the world of Runescape.  I am of a moderate height with brown hair usually pulled back in a ponytail.  My clothing is light and flexible, perfect for someone who would be fighting monsters every day.

Anyway, enough about me and on to the more interesting thing – Runescape.  When I entered the realm and my eyes stopped spinning, I took in my surroundings carefully.  I was in some sort of cellar it seemed, with boxes and barrels aligned against the walls.  At the opposite end of the small room was a tunnel whose end I could not see.  At the entrance to the tunnel stood a knight in white armor, looking rather fatigued.  I approached him curiously and inquired about where I was and what was going on. 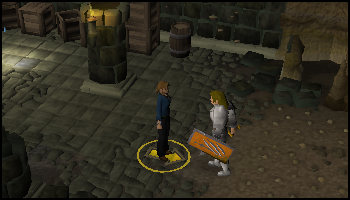 The answer I got from the knight, who called himself Sir Vant, was less than appealing.   Apparently that facetious rumor I heard wasn’t so facetious after all.  It turned out that there was a three headed dragon attacking the town, called Lumbridge, and Sir Vant had been assigned to keep it at bay.  Before he could say much more though, the fearsome dragon approached.  I watched, unmoving, as Sir Vant took up his sword and slashed at the beast. 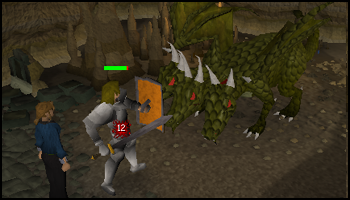 While Sir Vant was occupied with the dragon, I heard a sound behind me.  I wheeled around to find a goblin had snuck into the room and had busied itself with a bit of stealing.  I didn’t have a weapon and I didn’t want to distract the knight, so I stood there feeling helpless and stupid as I watched the goblin. 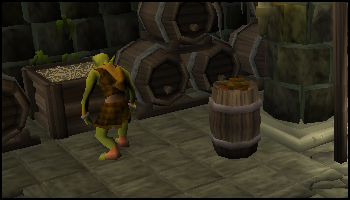 However, within a few minutes Sir Vant managed to hit the dragon and drive it back into the deeper parts of the tunnel.  As the dragon stumbled to get back farther, it hit the walls of the tunnel with a mighty crash and set loose some rock from the ceiling.  One hit the invading goblin square on the head and knocked it unconscious.  Sir Vant turned back to me and his eyes found the goblin.  Shaking his head, he offered me a spare sword and shield that he had and told me to see if I could defeat the goblin.  I was surprised at his request but walked off to do as he said.

It was surprisingly easy to kill the goblin, seeing as it was unconcious.  It started to wake a bit after I hit it a few times, but at that point it was already close to death.  With a few monotonous sword slashes, I managed to slay it. 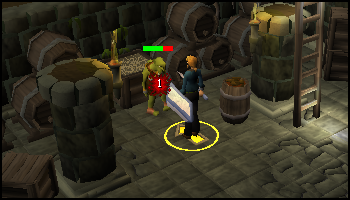 I walked back to Sir Vant and told him about my victory.  He was impressed with my skill and asked if I could do a few other tasks for him.  I had nothing better to do so I agreed.  He wrote down what he needed me to do quickly and then took up his weapon again, as an ominous thundering sound meant the dragon was coming again. 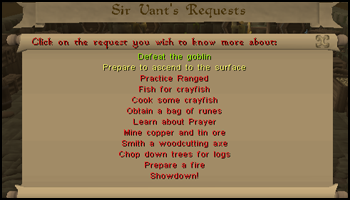 He again attacked the dragon as it came into sight, but something unexpected happened then: a druid teleported into the tunnel and started attacking Sir Vant with magic!  Taken by surprise, Sir Vant quickly asked me to get myself a bow and some arrows from the Range Tutor up in Lumbridge so that I could kill the Druid.  I agreed and climbed up the ladder to get to the ground level of the town. 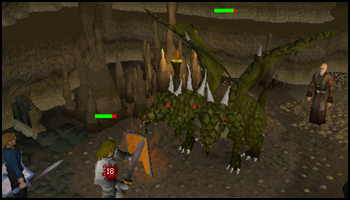 I ran to the combat training area, which had many tutors for each type of combat.  I quickly approached the Range tutor and asked for a bow and some arrows.  After practicing my dismal level one archery skills on a target (and making sure I could actually hit it), I went back underground to Sir Vant.

He was still engrossed with his battle against the dragon and the druid, but I could tell he was taking damage fast.  I quickly engaged in a long-range battle with the druid and easily defeated him.  With the druid gone, Sir Vant managed to hit the dragon again and drive it back.  As he stood there panting, he asked me if I could get him some crayfish to replenish his health.  I obliged and went back to the surface. 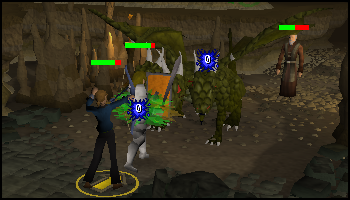 I looked around for the Fishing tutor who would show me how to get crayfish and found him easily.  I obtained a crayfish cage and began to fish.  After successfully getting two raw crayfish, I proceeded to the Cooking tutor to learn how to cook the fish. 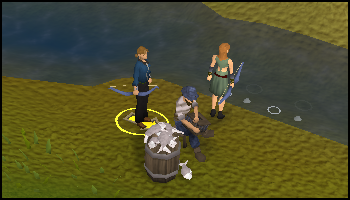 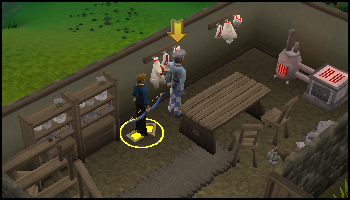 I got a little ahead of myself and burnt the first crayfish, but managed to roast the second one well.  With a cooked crayfish in hand, I ran back to Sir Vant.  He graciously accepted the food and ate it.  He did look slightly more healthy afterwards.  However, the dragon was still far from being defeated.  Sir Vant asked me to get a bag of runes from the Magic tutor which he could use to weaken the dragon with.  Having no other choice, I agreed and ran back to the combat tutors. 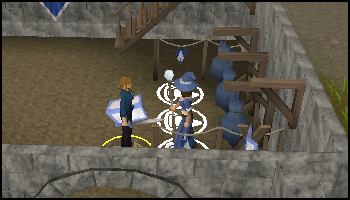 After speaking with the Magic tutor and learning to use magic on my own, I got the bag of runes and went back to Sir Vant, who took it and thanked me.  He then talked to me a bit about prayer and how it helped him stay alive in his battle with the dragon.  He asked me to learn about prayer myself by talking with the Prayer tutor in the church.  He also asked me to obtain the equipment to get a fire going in the room.  As usual, I agreed.

It was surprising how much stamina I had to run for so long.  The church wasn’t too far away, so I got there pretty fast and asked the Prayer tutor about …prayer (as if it wasn’t obvious enough).  I learned how to activate different prayers and the effects that some had. 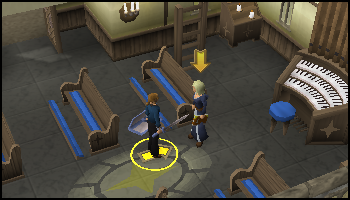 While I had a certain prayer activated, I also saw a strange pair of hands playing the organ, but that’s not too important. 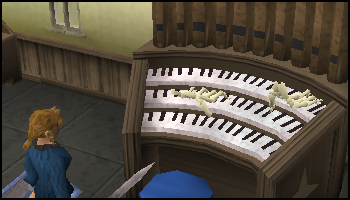 Anyway, after being immersed by the organ I found I ran out of energy to activate prayers and recharged my energy at the altar.  I thanked the Prayer tutor for her help and proceeded to the bank to deposit a few items I didn’t need.  After climbing up two sets of stairs in the Lumbridge castle, I arrived at the bank and talked to the Bank tutor about my account.  I opened a new account, deposited the items I didn’t need in it, and quickly went back downstairs to continue my tasks. 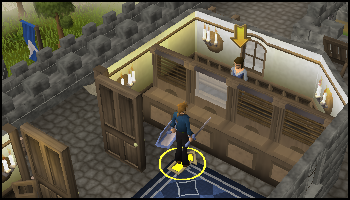 I then went to the Lumbridge Mine, where I was to get the equipment for making an axe (so that I could chop down a tree and get logs to light a fire in the cellar).  The Mining tutor taught me to prospect rocks to see what type of ore they held and then gave me a pickaxe so that I could obtain the ore from the rocks. 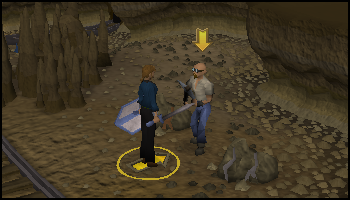 After I got a copper ore and a tin ore, the materials needed to make bronze, I exited the mine and went to the Smelting tutor, who taught me to use the forge in order to smelt the two ores together and make a bar of bronze. 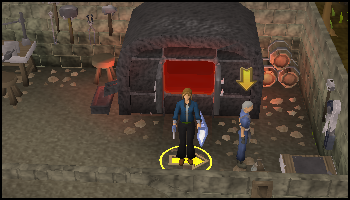 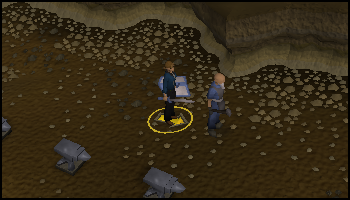 I left the mine once more and went to the Woodcutting tutor where I could get some logs for the fire.  I swung my newly-made bronze axe at a tree a few times and got some logs. 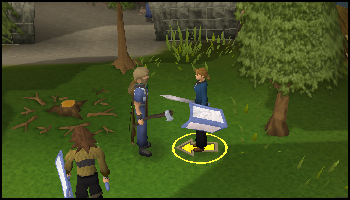 However, I now needed a tinderbox to light the logs with.  I went across the road to the general store and bought one with the coins I had gotten from killing the goblin.  With the materials needed to light a fire and my energy partially restored, I ran back to Sir Vant.  I quickly lit a fire for him in the fire pit, accepting his thanks.

Right then, the dragon came once more.  Taking up his sword and shield, Sir Vant proceeded to fight the dragon one last time.  Using the runes I had gotten for him, he weakened the dragon and then courageously slashed across the beast’s chest.  It let out a mighty roar, one that shook the walls of the room, and then tumbled over and crashed to the ground. 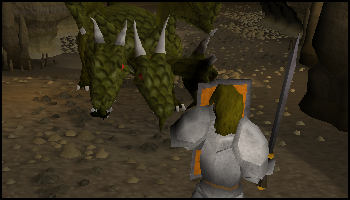 It was such a large beast that the jolt it sent into the ground from the crash traveled to the Lumbridge mine, which caused a tremor that set off an avalanche of rocks from the ceiling.  The tutors fled and escaped from the mine safely as it caved in. 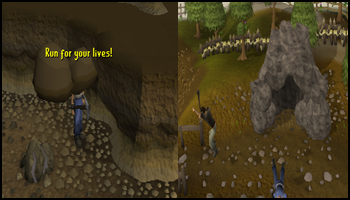 Meanwhile, back in the underground room, Sir Vant was so elated at his victory that he began rocking out in the room.  As I watched him with my mouth slightly open in shock at his nonexistent dancing skills, he explained to me about emotes, friends, enemies, and other settings. 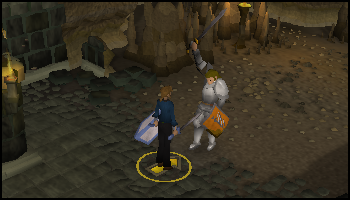 After that, he said I was free to go and I happily climbed the ladder for the last time and officially entered the world of Runescape, to where I would find dungeons and dragons and skills and quests and much, much more. 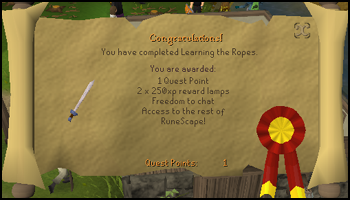