The Missing Link: Moving Old Media To A Computer

This months article was originally supposed to be on cloud computing. This article is still in the works and will come out next month. This month I’m going to talk about something that came to me in the middle of the night last night. I discovered that I have a large amount of classic DVD’s that in this day and age should be able to play on your computer system via a media server.

I was about to start some high-alching (got 88 Magic in the process) and wanted to watch a Star Trek DS9 episode. So I go over to the cabinet that holds all of the DVD’s and retrieved the appropriate box set. By the time I got back to the computer I was wondering why I was not simply able to go into my iTunes library and select this episode. Granted if I was in the U.S. I could go into the iTunes store and have a small selection of these episodes, but they are still missing quite a few. 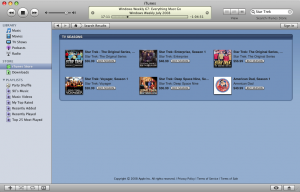 Basically what I am wondering is why isn’t there some sort of service where I can enter in a UPC code and serial number to prove that I have a certain DVD set then download a digital copy of the set. There is a greedy organization named the MPAA that would want me to pay twice for something I already own, which will do nothing seeing as transferring a stream of bits costs nothing. Something has to be done so that we can get a way to do exactly what is described above all at the same time while keeping the MPAA happy.

If something like this were to happen DRM on the video wouldn’t be that bad providing that the DRM is non-intrusive. The point about the current DRM scheme is that DRM makes it so that normal users can not do what they want to with their media. People who are more technically inclined or determined to get their media on their devices will succeed without question. The point I am trying to make is that if the RIAA and MPAA would let consumers put media on whatever devices they wanted DRM would not be an issue, even if these media files had DRM on them.

Now let’s take a look at an ideal situation.

I was about to start some high-alching (got 88 Magic in the process) and wanted to watch a Star Trek DS9 episode. So I goto StarTrek.com and look up the right episode (DS9 Season 3, Civil Defense). I then click on the watch this on iTunes button on the web page. I could have also accessed this via the iTunes search. From here if it is the first time I have downloaded something from this DVD set it would prompt me for the UPC code and serial number. The download would then start and begin playing once I have downloaded enough of it to create an appropriate buffer. When I am finished watching I can either delete it (download it again in the future if need be) or archive it to somewhere else on my disk.

Feel free to substitute iTunes for your favourite online retailer. Partner sites who have their content on iTunes or Amazon would be able to put a button on their site that would immediately goto the store to start the download. The benefit of this kind of service means that if I’m in another country and have my UPC code and serial number archived I can have access to my entire DVD collection. Bandwidth concerns will not be an issue for much longer as faster speed become available to more people. For example 5 years ago I had a 1.5Mbps down connection whereas now I have 10Mbps down with the capability of approaching 20Mbps for a short period of time.

That’s all for today,
If you have any article suggestions, comments, or questions about this article feel free to send me a pm on the forums.