And the award for “Most Underrated Game” goes to…

Finally, a step in the right direction

When I first saw the preview for The Darkness, for the Xbox360, I thought what any next-generation gamer would think: “Great, another shooter about aliens with no depth at all.” We’ve come to expect shooters to have fun gameplay, but lacking in the department of originality and an actual story. Sure, Halo created a universe and gave us some “bad ass” characters to learn to love, but did it actually give us a great experience? It seems as if the gaming companies are catering to the new generation of gamers, who, sadly, care more about the online features than an overall moving experience. When will a company realize that it is the SNES generation that continues to buy their games for the right reasons? I thought it would never happen. Then comes along The Darkness, based on a very interesting graphic novel. Now, Starbreeze clearly knew what the “old school” gamers like. 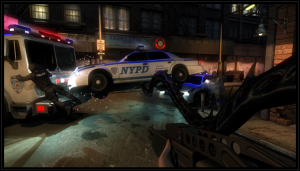 Classic mob story: Hitman gets possessed by an over obsessive demon. Like I said, classic.

Right off the bat, the story does sounds really cool. I mean, where can you go wrong with a mob hitman getting possessed by the Darkness then gaining some supernatural abilities? That drew me in right away. But that was only the tip of the iceberg. The main character is Jackie Estacado, a hitman for a mob family. When Jackie is asked to collect some money and the money goes missing, his Uncle Paulie sends half the city to kill him. That’s fine though, Jackie never liked Uncle Paulie, he drove the family into something it isn’t: working with the police, and getting into drugs. It’s an intriguing story and somewhat complicated once the game progresses. Without giving away too much beyond the first chapter, you walk around the city streets trying to make ends meet. During this time, the game takes many twists and turns. This is one of the first times where I actually felt emotion from an FPS. The Darkness also does a great job of portraying characters that the player feels angry and sad when a character dies, as well as feeling so much satisfaction when missions are completed. Like the good RPG’s out there (Final Fantasy comes to mind), you’ll find yourself wanting to replay the game just to experience it again. Nothing else to say other than “fantastic.” 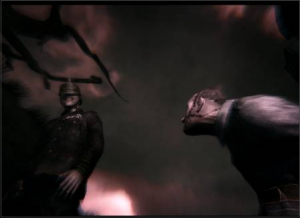 This is why I bought an Xbox360. The graphics are incredible, it just looks amazing. The lighting has been perfected to a point where I found myself staring at a barrel of fire in awe as the fumes blurred my vision of the nearby wall. As for the character models, they are beautiful. Walking through the subway and listening to people’s problems has never felt more realistic. Even when the characters are talking to you, it just looks so natural they way they move, such as the mob family members’ tendencies to use their hands when they talk. Realism, something most games lack these days. Aside from the amazing graphics, there were a couple graphical glitches, and the most important character had a little problem. Jackie Estacado, our protagonist, has the slightest moving mouth I have ever seen. When it shows Jackie talking in-game (not in the loading screens), he barely moves his mouth. I got me a little irritated, but of course I’m able to overlook it, seeing as how great The Darkness is. Other than that, one of the best looking games I’ve seen on the 360 to date. 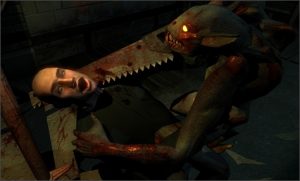 Kill some mob guys, help out the landlord, all in a day’s work.

The thing about the gameplay in The Darkness is that this isn’t a traditional FPS. It cares more about the story and the use of your abilities rather than using guns. Sure, you can pull out a Shotgun and blow some guy’s brains out, but would that really be fun? We’ve seen this stuff done time and time again in every single FPS. Now, how about impaling the same guy with a Demon Arm that comes out of your back? Or how about summoning a Black Hole to suck up five people in? Much more satisfying. Although the gun play isn’t all that great, you aren’t forced to use it. You gain a total of five abilities and 4 Darkling summons to help you take out your enemies, so you’re never shooting, hiding, shooting, hiding. But killing isn’t everything. There are a number of side-quests in which you must find certain people in different parts of the city and sort out their problems. Other than an Achievement and some extra content (comic book slides, original sketches), there are no rewards for these side-quests, but they provide a realistic and fun experience. Of course, some side-quests will involve you taking out a gang who is disturbing nearby homeowners with their loud music, but sometimes you’ll be asked to help someone find a lost memento. As an avid RPG player, I loved this aspect of the game because it lets you play at your own pace and do something away from the path. 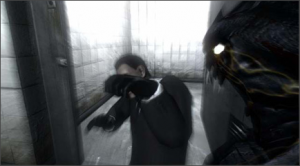 One of the best parts of the game. Once again, I’d expect to find good voice acting and a suiting soundtrack in an RPG, but again, it’s present here. Jackie Estacado has to be the best voice in the game, mainly because he sounds so natural when speaking. And the voice of the Darkness is so fitting and creepy. But even the less important characters, such as Aunt Sarah or Butcher are done so well. This was obviously a great cast of voice actors who knew exactly what they are doing. Music? In an FPS? This just stunned me. Never had I heard such great music in an FPS since the original Halo. The theme song for The Darkness was incredible, offering an emotional core of the whole game. When you visit the Orphanage where you grew up, you hear the same uncanny music playing, and during a gunfight some good rock music accompanies. The song during the credits summed up the whole experience for me. The music in The Darkness is the one thing that I would have never expected from a game in the FPS genre. 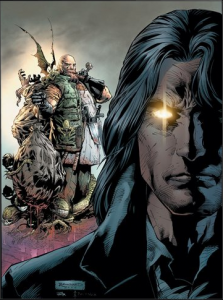 So where does that leave us?

When it comes down to the bare necessities, The Darkness is an awe-inspiring first-person shooter. The story alone sold the game for me. It’s just one of those things you would never think of, so original and satisfying. The graphics are what I would expect from a next-generation console: beautiful lighting and life like character models. Although some would find the gameplay dull, I found it very interesting and fun to experiment with the different abilities. Just because the gun play isn’t top notch, doesn’t mean the game isn’t worth playing. And the sound, oh, the sound. There isn’t enough I could say about it. You can tell that Starbreeze spent an awful amount of time thinking about something other than multiplayer for once, and for that, I am very glad. They have created a magnificent product, one for us “old school” gamers.