May Informer – A New Design

Welcome to the new RSBANDBInformer! website. As you can see this is closely based on the main rsbandb website which was created in late February. This theme was a combined work of Mushroom Queen (graphics), Jeff (CSS Design), Shane (backend WP coding). We’re still using WordPress for Infomer as it has not let us down yet. This website should be easier for everyone to find their way around and find old articles that they have been wanting 😉

With this brings me to a major change in RSBANDBInformer! Starting this month we’ll be abandoning the monthly publishing cycle. We feel that this will give you a more fresher view of events going on. The publishing schedule is as follows:

This schedule brings up a few points… First off gaming articles are going to be a regular occurrence. With this I would like to officially welcome Ryan and Total Plox to the writing team. Secondly we are still looking for tech writers. Check this forum topic for more info.

Just as we were publishing last months Informer Jagex released Summoning batch 2. Jason wrote an article on this much needed improvement to Summoning. The following week in April we saw Fist of Guthix. FoG as it is commonly called is the pvp mini-game that is available to both free players and members, Rune Beast wrote the article on this update. Next released was the expansion to the treasure trails. Anubis wrote an article on this update, welcome to the Informer Anubis. During the same week we also saw the much awaited Grand Exchange Database. Jason wrote about the benefits of now having access to this database as well as some improvements that could be made. Finally the last update of April – Legacy of Seergaze. Legacy of Seergaze is Part IV in the ongoing myreque quest series, so who better than Alex to write an article on such an important quest.

This month Slimppu claimed his 7th SOTM win with this signature: 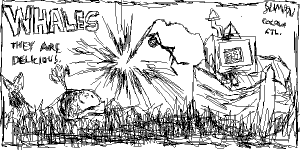 With that said I hope everyone enjoys the new design,
Shane, Brad, MQ, and The Informer Staff

This article is filed under FrontPage. You can follow any responses to this entry through the RSS 2.0 feed. Both comments and pings are currently closed.