After Jagex “killed” the Wilderness and most Player Vs. Player combat in RuneScape, they have been trying to keep PKers interested. Fist of Guthix is the newest Player Vs. Player Mini-game and, unlike other Mini-games, it is available to free players. Instead of item-risking Bounty Hunter, all your items are safe while you play in the arena. The rewards are granted by tokens earned by playing (you don’t even have to win to get a few tokens) and they must be recharged after a good amount of use.

The Fist of Guthix is located in the Wilderness north of Varrock. 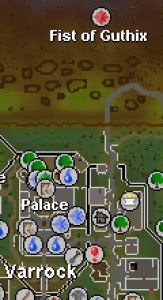 You don’t have to bring anything with you if you’re scared of revenants on your trip into level 7 Wilderness because there is a bank in the cave that you can use. When you see the red asterisk (it looks like a re-colored quest icon) on your Mini-map you’re near the cave. Enter it, and you’ll find yourself in the Fist of Guthix lobby. If you plan to use magic, runes are supplied for you. Ranged ammunition is not provided, but it will be returned to you after the game. Melee is not advised in Fist of Guthix, but you can use it if you must. To start playing you have to speak to Fiara. She is located on the eastern side of the lobby, near the passageway to the waiting room. 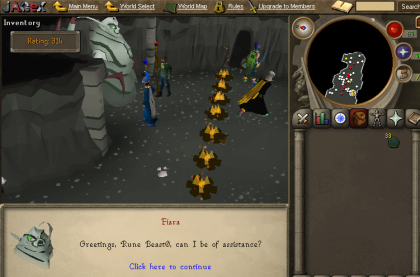 After you watch her explain everything (which you can just read in this article anyway) you can now enter…THE ARENAAAAA! Step through the passageway next to Fiara and you’ll arrive in the waiting room until enough players join to start the game. While you wait, make sure you have your armor and weapons equipped. Even though you get your runes in the waiting room, you cannot set autocasts until the game starts. You also get bandages that heal 15 hitpoints and an orb that will teleport you to the Fist of Guthix in the center of the arena. When enough players enter the waiting room your game will begin. You are teleported into the Fist of Guthix arena, and your fight will begin Duel Arena style: 3, 2, 1, FIGHT! Before you charge into battle, here are some things to keep in mind. You get one round hunting your selected target (you can’t attack anyone else) and one round being hunted by the same opponent. The goal of the hunted is to equip a stone of power and gather magical charges. The goal of the hunter is to kill your target as quickly as possible, keeping them from getting many charges. It is randomly decided whether you start as the hunter or the hunted. However, there is a way to tell which one you are before the beginning of the fight. If you see a message telling you your stats are reduced, you are being hunted first. If you don’t see the message, make sure your run is on and prepare to dash.

~If you are the Hunted~

When you get the message, wait for the countdown. You’ll see who you’re being hunted by as soon as the countdown ends and your character yells “FIGHT!” When you gather charges you’ll be able to see them at the same place.

As soon as you can, run for one of the stone dispensers. When you get a stone of power, make sure to equip it or you can’t gather any charges! If you head to the center of the arena your target will be able to find you fairly easily. However, you will get more charges standing on the center of the arena, which is the Fist of Guthix. It has been coined the term “Death Dot” by players because of the sheer number of people standing on the Fist. When the game was first released, it was almost impossible to find your target due to the list given to hunters upon right-clicking. Now, as popularity of this game has gone down a bit, it is merely difficult. As you go further around the edges of the arena, you will gain less charges per second. The edges are the hardest place to find a person, but you only gain about 1 charge per second. On average, you get charges every 3 seconds. You’ll have to use your Mini-map to see if your hunter is near you, as their white dot will have a yellow arrow above it.

If you need to escape from a pursuing hunter, there are three ways to do so. Obviously, if they are using melee, you can stay out of their attacking range until you can use another method of escape. Rangers and magic users are harder to escape from, which is why it is recommended to use range and magic in Fist of Guthix. Next, you could use your one-use teleport orb to take you to the center. This is particularly good if you see your hunter just out of attacking range, as they’ll have to chase you down to the center. If you’ve used your orb or want to save it, you can use the teleport shacks. They are four little houses with magical barriers at the doors. Only hunted players may go inside the teleport shacks, and they immediately become invisible to their hunters once they pass the barrier. There is a portal inside that will either teleport you to one of the other teleport shacks (most often) or a random place in the arena (rarely). Spending time in the teleport shacks decreases your hitpoints, so you shouldn’t stay inside too long. I don’t suggest teleporting out right away. Watching what your hunter outside is doing can provide you with information. If they are waiting outside the shack it is best to teleport and sneak away somewhere else. If your hunter runs off, thinking you teleported, you can slip out the barrier without using the portal. Running to the edges is a decent strategy for avoiding hunters, as they will have to hunt around the large arena, not even knowing which direction you left from.

It depends upon your personal strategy for being the hunted player, but some important points to remember are:

~If you are the Hunter~

If you don’t get the “stats are reduced” message when you start the game, you are the hunter. As you count down make sure your run is on. You will be able to see the name of your target in the same place you see your current charges.

As soon as the countdown ends, run to the opposite side of the arena that you spawned on. Set autocasts if you are using magic while you go this way. If you were previously hunted, equip your weapons again. Your target will typically be somewhere around there, and sometimes you can get to them just as they pick up their stone. The Mini-map will show a yellow arrow above your target’s white dot (this is essential for tracking). If you don’t see your target, they probably teleported to the center of the arena. Run to the Fist and look for your target. If they are not there, wait for your run energy to be restored a bit. Start to go around the perimeter of the arena, checking for the yellow arrow. If you are close to your target you will sometimes see a red arrow on the Mini-map pointing to their direction. Be sure to trust your arrows, as in a crowded arena it is very hard without them.

If you catch your target, be sure to keep an eye on where they are at all times. I recommend using magic or range, because melee is easier to escape from if you are hunted. If your target steps into a teleport shack, hang around outside for a few seconds. Your target will most likely teleport if they see you waiting outside as the health drain can be quite significant. After you wait for a bit, head to the Fist and take a look around for just a few seconds. Sometimes your target will exit the portal shack where you can see them. If you don’t see them, go around the outside of the teleport shacks. Of course, if you spot your target, pursue them for the kill to stop their gaining of charges. Targets will sometimes leave the teleport shacks and head around the outside. Effective hunted players will use the edge and the Fist, so be sure that you check thoroughly. Some hiders will jump into teleport shacks so often that you never see them. You’ll have to hope you see them somewhere in the arena, or else it could go on for the whole round.

After you play, you get teleported back to the lobby with a message telling you who got more charges. If you got more charges, your rating will go up. Rating does not really affect anything that you play with. Tokens are given to you depending on your performance in the game. Sometimes, you will get tokens for playing solidly even in a loss. Going to Reggie, a druid located in the lobby, will allow you to buy tradable rewards such as robes and gauntlets that increase your experience when you train certain skills. These rewards can only be traded when fully uncharged, which can be done if you speak to Reggie again.

I hope this guide helped you with your Fist of Guthix endeavours.
Happy Fighting!