The Stronghold Of Player Safety

After the Stronghold of Security, the randoms popping up to inform you about safety, and now the Stronghold of Player Safety, players must be quite ignorant to give out certain details. Most of the stuff in this new Stronghold is merely common sense, but I suppose not all players have much of that. The real rewards for most players are the monsters, but we’ll get to those later. First things first, the actual safety section and entering the Stronghold!

The Stronghold of Player Safety is located just north of the Barbarian Village, south of Edgeville. 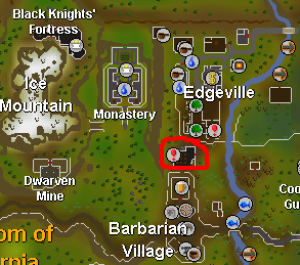 Trying to use the logical entrance (the door) to that building will not work the first time. You’ll have to head around the back and enter through the cellar. 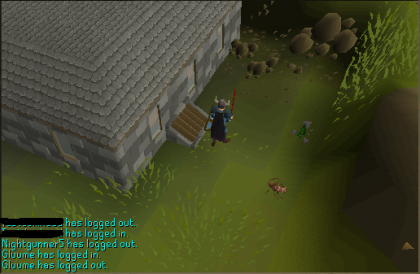 Once you go through there, you’ll end up in an underground prison full of goblin-looking creatures. Notice there are plaques on the cells. To get to the cockroaches, reward, and more safety, you have to read each plaque. They all have some sort of tidbit on RuneScape safety. 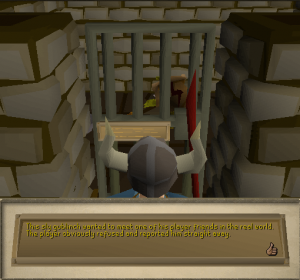 When you read all the plaques, you have to speak to the guard wandering around on one side of the dungeon. He will tell you a bit about Report Abuse, then tell you to go up the ladder. When you go up, you’ll arrive in the Misthalin Training Center of Excellence. 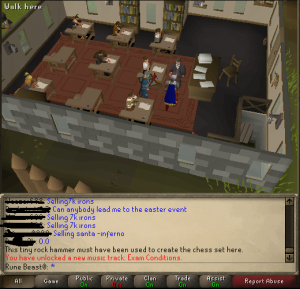 Speak to the professor and choose to take the exam. Answer the questions with the “safe” answers. The exam is pretty straightforward, so you shouldn’t have problems with it. 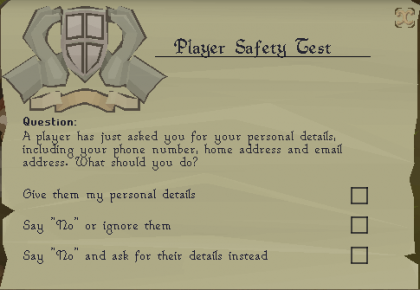 Once you complete this exam, you are given 2 red genie lamps that give you 500 exp each. You are also given access to the downstairs section of the Stronghold of Player Safety. Head back down into the prison you started in, and find the empty cell. You’ll notice a poster on the wall that you can pass by. Do so, and you’ll appear in a room of level 6 muggers. If you move to the east, through the tunnels, you’ll see level 8 cockroach drones and level 56 cockroach workers. Most players don’t bother with these monsters, but for their levels they have decent drops. The “big daddies” and main attraction of this Stronghold are the level 83 cockroach soldiers. 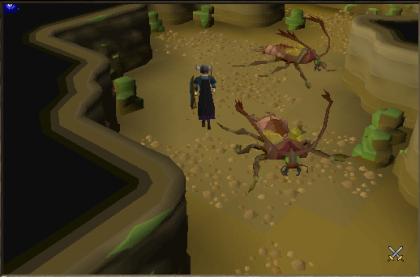 These baddies guard the rooms near the treasure. Go to the northeast corner of the tunnels and you’ll be able to move to the next floor. Go up further north, and you’ll discover a rope leading to the surface. From that rope, you can enter the tunnels from the surface and exit from the tunnels to the surface. For people who wish to return to fight cockroaches, it’s a good addition to the tunnels. While travelling through the stronghold, you’ll spot some locked doors. Moving around to the various levers scattered around and pulling them will open these cockroach soldier guarded doors. Eventually, by unlocking the doors, you’ll stumble upon the treasure.

All together, the Stronghold of Player Safety gives players safety advice, 10k in gold pieces, 1k exp in skills of your choice, access to monsters with decent drops, some gloves, a new emote, and a few new music tracks. Some of it is just more proof that Jagex is still catering to the younger players, but the Stronghold can actually be useful to other players. The cockroach soldiers are common in training, and they drop crimson charms somewhat often for members. I find this update kind of unnecessary for most players abiding by Jagex’s age rule, but it can’t hurt.

Could this mean the start of more player protection Strongholds? Only time will tell.