Wolf Whistle: A Start to Summoning

With the release of the quest Wolf Whistle, many players came from every corner of RuneScape to Taverley. The reason? A druid named Pikkupstix. Pikkupstix is the man to talk to for a start to RuneScape’s newest skill: Summoning.

There aren’t any requirements from this quest, apart from being a member, but completing the quest Priest In Peril can be slightly helpful at the beginning of Wolf Whistle.

First off, before you go charging headlong into the gates of Taverley, I suggest a quick trip to Canifis. Why? Canifis has wolves. For this quest, you need two wolf bones, so you can pick those up easily, especially if you have wolfbane. After the quest, you gain enough Summoning exp to summon Dreadfowl. Dreadfowl require raw chicken, which is sold in infinite amounts at Rufus’s Meat Emporium located outside of the Canifis bank. Therefore, I find it worthwhile to drop by.

To begin this quest, head to Taverley, or more specifically, the building with the wolf head on the minimap. 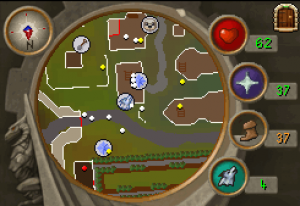 Once you go inside, you’ll see Pikkupstix. He’s the one to talk to. 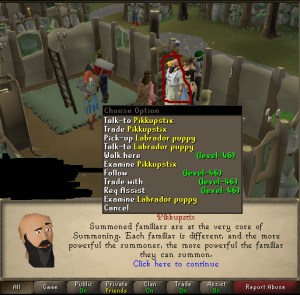 When you talk to Pikkupstix, he’ll tell you about a wolpertinger upstairs. You will literally treat it as a giant rabbit. Go up the ladder and your overconfidence will disappear as you see that it is far more fearsome than a rabbit. After a cut-scene you go back down the ladder. Speaking to Pikkupstix again reveals that he cannot leave, so you’ll have to summon a spirit wolf to make the Wolpertinger go away.

If you don’t have 2 wolf bones for this section, head to White Wolf Mountain. You’ll see a dead druid. If you search the body you can find the bones you need. Speak to Pikkupstix with the wolf bones in your inventory. He’ll give you everything else you need to infuse your summoning pouches and scrolls.

Open the trapdoor east of where Pikkupstix wanders around, and go down it. You’ll see a summoning obelisk. This is where the magic happens. 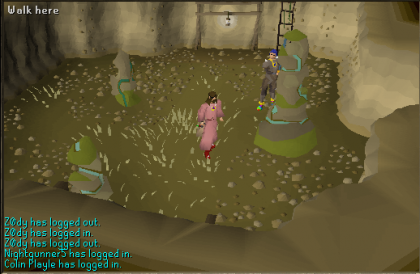 Choose “Infuse-Pouch” on the biggest obelisk (the one nearest the ladder) and click on the picture of the Spirit Wolf pouch. Use one of the Spirit Wolf pouches on the obelisk and pick “Howl” scroll for 10 Howl scrolls. Now, head back up the ladder and talk to Pikkupstix. He’ll tell you how to get rid of the Wolpertinger. After he finishes speaking go up the ladder. There will be a short cut-scene, then you’ll want to right click on your spirit wolf pouch and select “Summon” to get your first familiar. 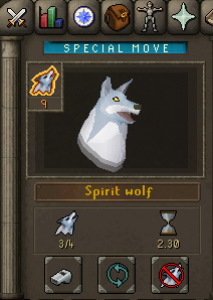 To get rid of the Wolpertinger, go to the Summoning screen. You’ll see a small head in the top left hand corner above the picture of your familiar. The little number shows how many scrolls you have for that move. Click on the head and select the Giant Wolpertinger as the target. There will be a cut-scene, and your spirit wolf will chase away the Wolpertinger. Head downstairs to tell Pikkupstix about the departure of the Wolpertinger. You will feel dizzy, so he will tell you to renew your Summoning points. Head down the trapdoor back into the obelisk room and right-click-select “Renew-Points”. Go up the ladder and talk to Pikkupstix once this is done. You’ll get your reward and a nice little explanation of Summoning.

From here on out, it’s up to you to decide what you want to summon or how you want to train. Have fun, and Happy Summoning!